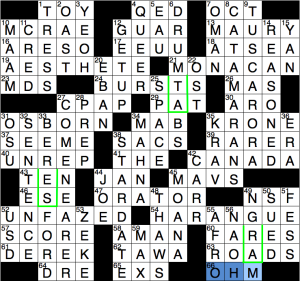 hello and welcome to episode #739 of matt gaffney’s weekly crossword contest, “My Cup Runneth Over”. for week 5 of guest constructor month at mgwcc, we have a puzzle from will nediger, who challenges us to find a beverage. all right. what are the theme answers? i don’t know. it’s a curious grid, with no long across answers (a couple of 8s) but a handful of long downs in stacks (an 8-9-10 stack in each of two corners), plus a couple of other 8s. the grid is also 16-wide, which is noteworthy but not unheard of.

the title suggests (to me, anyway) looking at words that might run over the edges of the grid that turn into cups or drinking vessels or beverage names. in that light, i did notice that the consecutive entries AT SEA on the right edge of the grid and AESTHETE on the left edge of the next row contain the shared string TSEA, forwards at the end of AT SEA and in reverse at the start of AESTHETE. that was interesting to me, but i don’t quite know what to do with it.

will’s homeland CANADA is in the grid, clued as {“Come from Away” country}. it’s also at the edge of the grid, and that made me think of the ginger ale brand CANADA DRY. i don’t know what to do with that, either.

oh, this is interesting—i’ve just noticed that the grid contains no instances of the letter I. that is quite unusual and feels like it shouldn’t just happen by accident. wait, there are no L’s, either—a little bit less surprising, but still surprising. every other letter gets used at least once, including rare letters like JQVWXZ, once each.

okay, it probably matters that {Ruptures} BURSTS is in the grid and {Structures affected by bursitis} is a clue (for SACS), since BURSTS and BURSITIS differ only by the insertion of two I’s. are there other things like this? yes, there’s {Bus payments} FARES and {Queen of the fairies} MAB. i should find more of these even though i don’t understand what’s going on yet. there is one more pair with two I’s and a few with I and L:

all right, what are we doing with these six pairs? looking at the grid, i notice that the words that can have I’s and L’s inserted are all across entries in three stacked pairs: BURSTS on top of PAT, TEN atop ESE, and FARES atop ROADS. drawing in the I’s and L’s along the border lines between the squares kind of suggests a cup around two letters in each pair. i guess that’s why I and L were chosen for this particular exercise. but what now?

reading off the letters in the “cups” gives TAESRA, which … is not a beverage. looking at the letters just above each cup (because they “runneth over”) gives MRG, which … is still not a beverage. i do note that the lower right cup has the letters ORANG leading down into it, from the end of TUSCARORA and the start of NGRAM. orange juice (or orange soda, orange crush) is a drink. i don’t know what’s happening with the others, though. DRUM TABS i guess has RUM over the cup, but if there’s something i’m supposed to be seeing in TRESS / BERESFORD, i am missing it.

i feel like i’m pretty close, but there’s definitely (at least) one more step i am not seeing, and my time is up, unfortunately. what’d i miss? 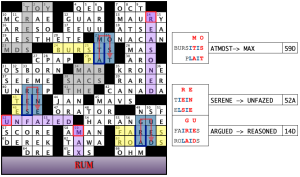 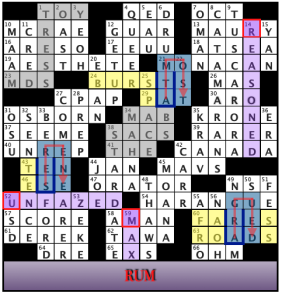