Given the title and the grid design, I knew something would be going on with that large, central square. So when I uncovered 20d ICE(box), I immediately filled in the other four entries touching the sides of the square. What I didn’t expect was that all of the entries touching the box are “box” entries. Thus we have… 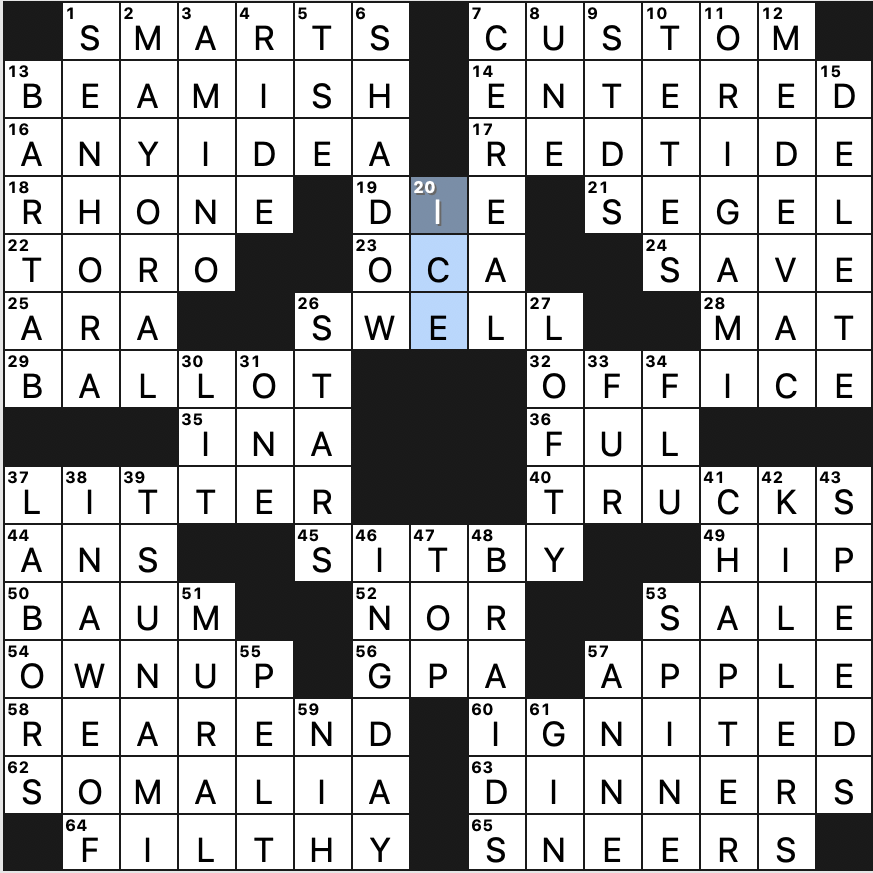 Impressive execution. I was not expecting to have that much theme material concentrated in the center of the grid, and it’s handled (mostly) well. Yes, with that many constraints in one area, you get an entry like OCA, but the crossings were fair enough. New to me are the terms “box trucks” and “box braids,” but again, these weren’t hard to infer.

Due to the nature of the grid design, there aren’t any long fill entries, but there are still some 7s to enjoy like TSUNAMI, SOMALIA, REAR END, “ANY IDEA?”, and ORIGAMI. I had to give BEAMISH [Radiantly happy] the side-eye, since I wanted it to be “beaming.” But apparently that’s a real word.

It’s nice to have something different once in a while, and this fit the bill, especially with its strong execution. Solid fill and good clues round it out. Four stars. 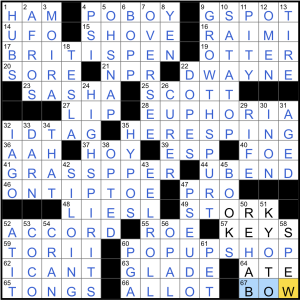 Today’s puzzle from Ella Dershowitz is probably best explained by starting with its revealer:

And indeed, in each of these entries the letters in SHOP pop “up” into the grid entry above it, making a bit of a bump:

I spent a fair amount of time trying to do something with rebus squares here, but neither SHO or HOP was really doing anything.  Then I realized each SHOP forms a little square that pops into the entry above it, and that was that.

Editor:  Amanda Rafkin
Theme: Each of the theme answers is “wrapped” by the word “pass” on its edges. 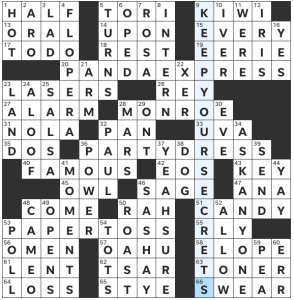 This puzzle’s title is a reference to a basketball pass, and despite playing basketball for years I still had to go to Google to confirm that’s what it was. So, it’s a bit niche, but it explains the concept well. I like all three of the theme answers – the phrase PARTY DRESS always reminds me specifically of Taylor Swift, who uses the term in her songs more than anyone else I know uses it ever.

Favorite clues: 6d [Essay arguing for reparations, perhaps] for OP-ED, [Gay icon Marilyn] for MONROE, the repetition of 45a [“Wise” bird] for OWL and 46a [Wise person] for SAGE. 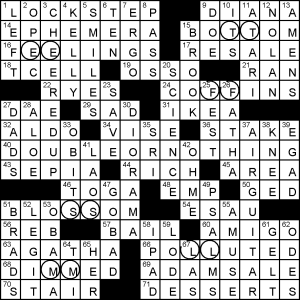 Today’s puzzle by David Tuffs is one of the more intricate LA Times themes we’ve seen in recent times, but also one that I can see being missed by a lot of people. The revealer is DOUBLEORNOTHING, and there are six pairs of circled double letters. The magic happens in the clues. The clue of [Part of the stock market cycle], BO{TT}OM works with or without its “TT”. So too [What lovers have], F{EE}LINGS, which I can’t hearing sang like Morris Albert; [Artifacts in ancient tombs], CO{FF}INS, which is quite a creative example; [Come into flower], BLO{SS}OM; [Gave a dirty look], PO{LL}UTED is one the I don’t wholly get, pouted sure, but I can’t see how you can make polluted fit this clue; and lastly [Went out, as a bulb], DI{MM}ED.

There were surprisingly many interesting longer answers out of the theme today. My five faves were: LOCKSTEP, EPHEMERA, AIRGUITAR, DIORAMA and, oh, what the heck, ADAMSALE for its quaintness.

Odd abbrs. were a mini-theme today. I have never had cause to abbreviate emperor as [Old Rom. ruler], EMP. [Court stat], REB had me puzzled, but I assume it’s “rebounds”.

Theme: Each theme answer turns a Y of a common phrase into an I. 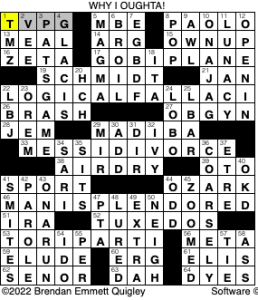 I appreciated the puns of these answers, especially MESSI DIVORCE and MANI-SPLENDORED. It’s definitely a very creative theme overall. I struggled most with GOBI PLANE and LOGICAL FALLACI. As it is supposed to, my brain really wanted to fill in TORY PARTY, which is a clever misdirect (intentional or otherwise) since you could keep the Ys on both ends of this answer.

I thought that 16a [“Sixth Greek letter”] was kind of fun with ZETA since, if you don’t know the Greek alphabet, it’s unexpected to find Z so early. I also enjoyed the very modern use of 45a [“Did an online meeting”] ZOOMED. Colloquially, I was also less excited about 10a [“Knocking ‘em back and then some”] ON A JAG. I’ve never heard that phrase before. Have y’all? Maybe it’s just me.

Additionally, I think that we need to retire this spelling of 39a [“Siouan tribe”] OTO since, while the Encyclopedia Britannica uses it, the Otoe-Missouria tribe itself does not.

Overall, a clever theme with some fun wordplay.