I gave an audible chuckle when I got to the second theme answer and the sky dropped. I’m glad there was no additional revealer beyond the title. 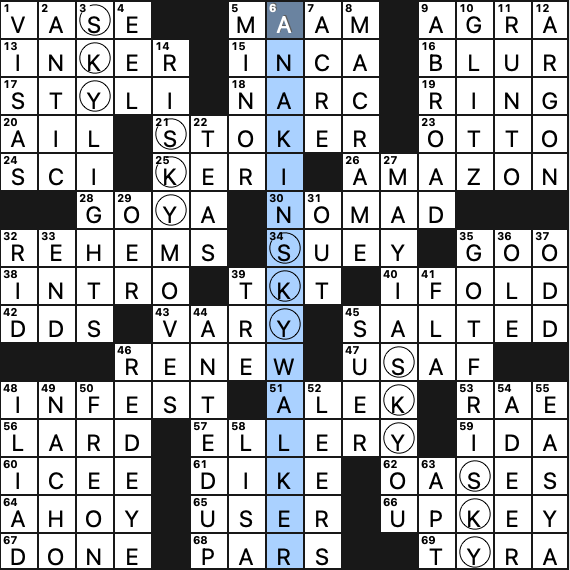 It’s not a perfect theme set; “sky” is used with its original meaning in SKYLIGHTS and arguably in SKYWALKER and not in the others. And “MAY I ASK YOU” strikes me as an awkward phrase for a puzzle. But the humorous aha moment outshone any negatives in the theme, and I was still won over by the end. 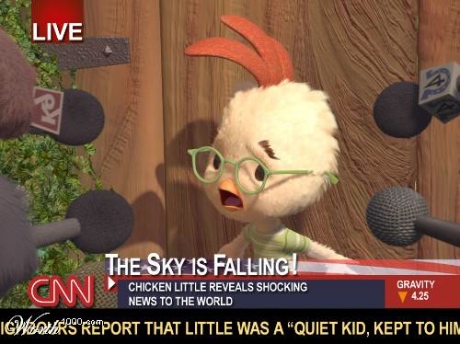 Elsewhere, highlights include MACRAME and AMAZON clued with respect to Wonder Woman, not the online behemoth. There seemed to be a high number of proper names in the grid, which might prove troublesome for some solvers. 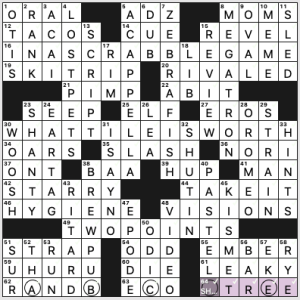 I use Crossword Scraper to generate a .puz file of the NYT, and that turned out to be an unsatisfying option for this puzzle. There didn’t seem to be an accepted solution! The solution in the Web version of the puzzle fills a particular square with the word SHADE, but the theme clue says to “fill in” the correct circle, not to SHADE it. A tad dissatisfying as an endgame. Curious to know if the Web/app versions give you any hint that the word SHADE is what’s expected. Here’s the theme:

The circled letters in the bottom row are A, B, C, (D), and E, with the A B C E working with the Downs and 40d’s clue looking for a singular PASTEL, so you should fill in that circle with your pencil … though standardized test papers don’t generally put the multiple-choice letter inside the bubble you fill in, so the concept here feels a bit off. At any rate, A and E are worth 1 point each, C and B are 3 apiece, and only D is 2 points among these five letters.

The overall vibe felt a bit crosswordese-ish, with ADZ, ONT, RITARD., EPODE and -ODIC, along with the awkward I SAY NO. 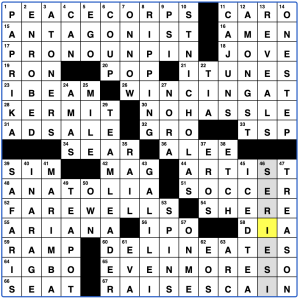 It’s a themeless Wednesday from the AVCX, and today’s grid from Ariel Haymarket had some lovely flavor:

This is my favorite breakdown of the AMEN break, a clip of music you’ve absolutely heard sampled somewhere. 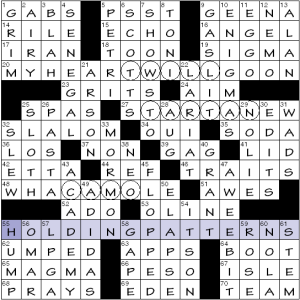 These seem acceptable to me.

Nothing else is really jumping out at me. Just a well-constructed midweek crossword. 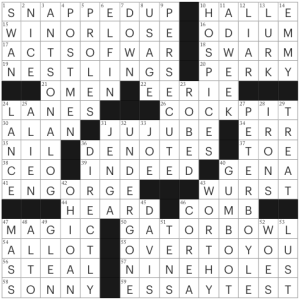 Let’s get right to it. Fave fill: SNAPPED UP, JUJUBE, “OVER TO YOU,” ANTS ON A LOG, PETER BOYLE, and HOSPICES (because the hospice volunteers were so much comfort when my grandma was dying). 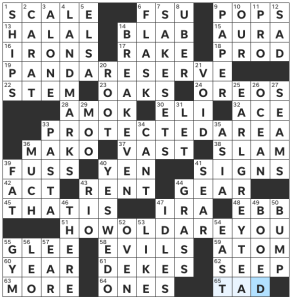 I liked this theme because the title immediately made me think of “Triple Dog Dare” by Lucy Dacus, so thank you puzzle for starting my day with that. The theme answers are pretty good, although when I saw the clue for PROTECTED AREA I hadn’t gotten PANDA RESERVE yet, so the whole top of the puzzle took me quite a while to get through due to the cross-referencing. 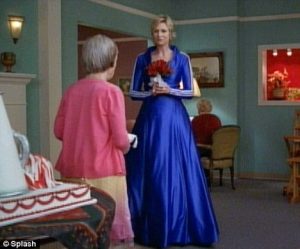 Straight up my favorite thing in the puzzle was this amazing clue for GLEE: [TV show that featured a tracksuit-dress self-wedding]. I can’t believe we’re getting this reference over 10 years after it originally aired, but I’m here for it. Curious if there was literally anyone else on the planet that this was such a gimme for.

Oh yeah, other things in the puzzle! LANDMARKS and EARL GREY TEA are nice longer answers. I had “sake cups” as opposed to SAKE SETS, which held up the middle of the puzzle for a while. I have never heard of this Lani character so the ELI clue meant nothing to me – it’s only after googling that I learned that “Days” is just “Days Of Our Lives”? Is it usually abbreviated like that?? I thought it was a new show I had never heard of. 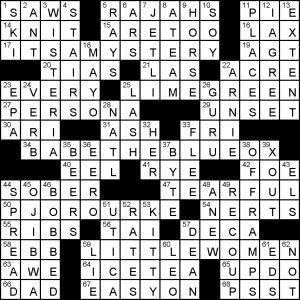 Today’s puzzle theme by Susan Gelfand is fairly basic: the three LITTLEWOMEN lead characters: AMY, MEG, BETH and JO are found split across two answers in three long across entries. Despite its short length, splitting JO across two answers is quite tricky! We have:

The five theme entry arrangement with a middle thirteen entry always tends to cramp the rest of the grid. Dealing with that, plus the thematic X and J meant there were few other splashy spots in the grid. There weren’t too many tricky or up-to-date clues, but only a few really cliched ones too: [Architect Saarinen], EERO is a rarely sighted beast these days.