Theme: Each answer starts with a type of makeup. 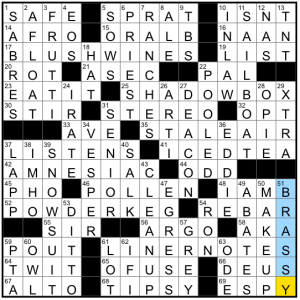 Well, I didn’t get the theme until after I had solved the puzzle and actually took the time to fully understand the revealer. It’s a cute idea! These are all very common types of makeup so even folks who aren’t too familiar with it should still get the concept. My one qualm with the theme is the vagueness of LINER NOTES – there are so many different types of makeup liners that not specifying “eye” or “lip”, etc., made it feel a little unsatisfying. I kind of had the same problem with SHADOW BOX. That being said, I liked both of those answers themselves a lot (despite dropping in “track lists” for 61a without a second thought).

There’s a lot of long fill in the puzzle, so I was surprised when I saw that the puzzle was a full 78 words. There are a lot of three letter answers but they’re pretty spread out (well, besides the NE and SW corners), so it didn’t feel like big chunks of the puzzle were swaths of boring fill. SAILBOAT and SNOWSUIT were my two favorite non-theme answers. The downside is that there are a lot of less great answers, particularly in the A SEC/ART I area.

Theme answers are familiar phrases whose final words are also yoga poses. Entries are clued wackily based on the first word in the phrase. 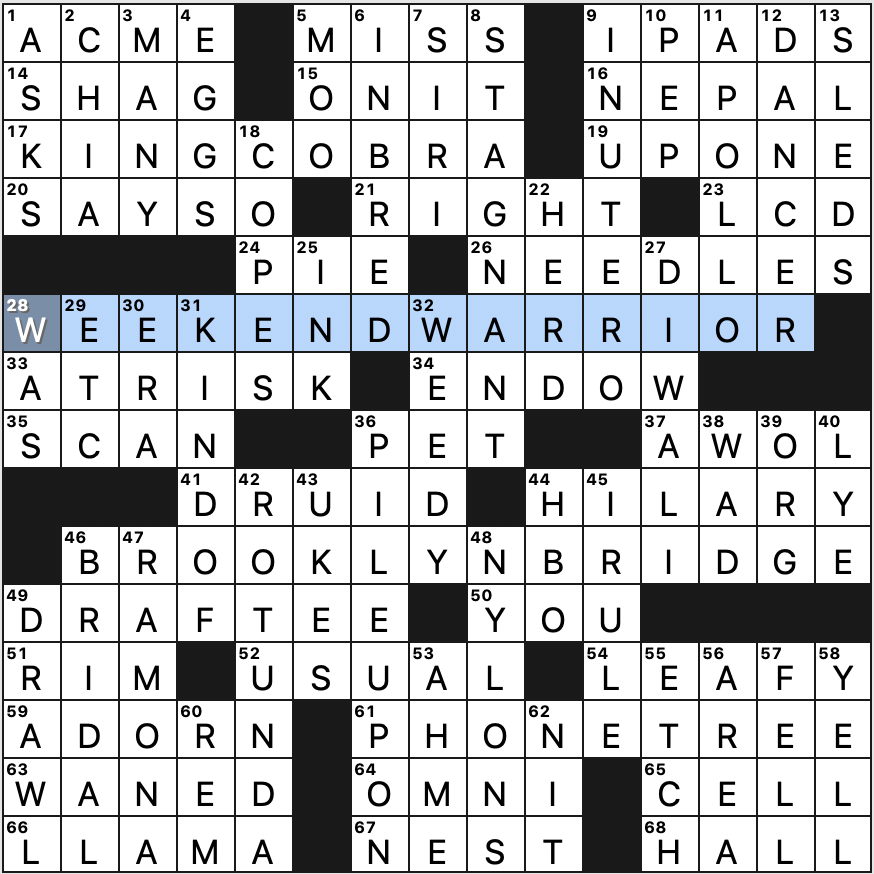 Fun theme even for someone who has only done a minimal amount of yoga. I like the consistency, the lively phrases, and the use of simply-named, common poses that many people would know.

Elsewhere, ROTUNDA and STAGNANT are fun words, and I like seeing DIWALI, not least of all because it’s fun to say.

Enjoyable theme and a clean grid to start your week. 3.75 stars. 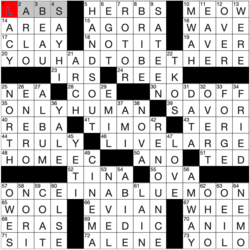 So much for CARPE DIEM–this puzzle is about the more modern expression of that idea, YOLO. YOLO is the revealer at 73A, clued as [“Carpe diem” acronym spelled out by the starts of the answers to the starred clues], since the first word of each theme answer is a word in the initialism:

Cute theme, though it requires me to set aside my distaste for the underlying phrase. It’s been said that the free-spirited grammarian’s version is YLOO, or “you live only once,” since “only” should come directly before the word it modifies. YUP! 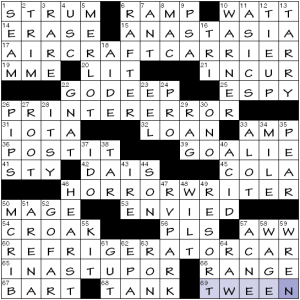 Title’s a bit strained, but the theme idea is solid enough. Each of the longest across answers contains five instances of the letter R distributed across two-word phrases.

Three of these have *RR*R words with the other word possessing two additional Rs. The fourth is exceptional, having four Rs—none of them doubled—in one word and just a single R in the complementary word.

Another thing I would have liked to have seen would be the absence of Rs elsewhere in the grid, but there are plenty. No doubt it would have entailed too many compromises in the fill for an easy-pitch crossword. 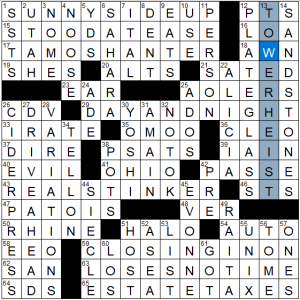 Nice challenge from BEQ today; even when I was moving quickly, I felt I was getting lucky — SUNNY SIDE UP today after appearing in the New Yorker Friday, for example, and I’ve no clue where Mal de SIECLE was living in my brain.

I’m going right to notes, because it’s what I want to do today: 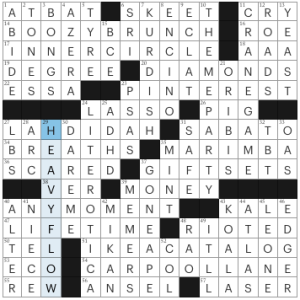 The Monday New Yorker puzzles usually land in the 6- to 8-minute range for me, suitably tough and akin to a tough Saturday NYT. A 4:18 finish here places this at the easier end of the Friday NYT spectrum, so not as hard as I expected. Could be a wheelhouse thing. Was it easier than usual for you?

Good morning, folks! This is a puzzle where I say a lot of things that I frequently say: It is so hard to make a symmetrical USA Today puzzle because the standard for fill is so high, so that’s impressive. (This is *almost* up-down symmetry, just off by one block.) And same with using four themies– I always do just three to make my life easier. Neville had FIVE today!! 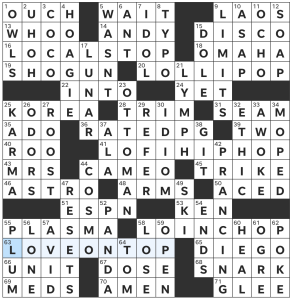 These were lovely answers, by the way, all of which are bookkended by LO and OP, such that the rest of the answer is “in the loop,” as our title tells us. LOVE ON TOP, LOLLIPOP, and LOFI HIPHOP would all be welcome additions to a themeless grid. LOIN CHOP as one term is new to me, though I know the two words. And LOCAL STOP speaks to my little train-loving heart. I rode the train four times today! Standard stuff for my lifestyle. (I live on an express stop though.)