Edited to add: Apparently, this puzzle was made under a pseudonym and it is unclear as of now whether the NYT team knew about it or not. I’m guessing they did not:

Ok #nytxw folks- what’s up with xwordinfo id’ing Sunday’s debut constructor Tina Labadie as a pseudonym for another (male) constructor, David C. Duncan Dekker, w/out explanation? Is it true? Does Will know this? Am I missing a joke here? @NYTGames @DebAmlen @NYTimesWordplay

gosh is it a multi-layered exploration of all things “Letterplay.” Apologies in advance if I don’t catch all the theme-adjacent content! 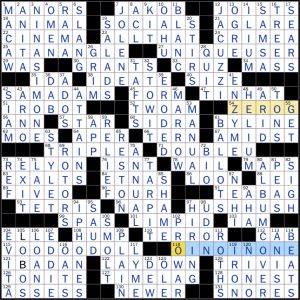 In each pair of theme entries, the second entry literally described the letter pattern of the first entry: AT AN ANGLE has three A’s (TRIPLE A), SAM ADAMS has two “AM”s (TWO AM), etc. I’m stuck on how DOUBLE U hints to UNIQUE USER since there are three U’s in that phrase, unless it’s that it’s a U___ U___ entry, regardless of whatever other letters are in the entry. If that’s the case, it feels a tad inelegant, since all the other theme pairs spell out how many of the certain letter are in the other entry, not the number of words that start with that letter. Or was TRIPLE A for AT AN ANGLE meant to indicate A___ A___ A___?

I’m guessing that the (G)OIN(G) (G)OIN(G) (G)ONE trick entry (ZERO G!) is going to be polarizing. Some will see it as an exception that justifies the rule, while others will likely see it as an inelegant entry that doesn’t match the others. I’m not sure where I land, but I’m glad the constructor went for it!

I’m also impressed by the symmetrical placement of all of the above theme entries -that’s not easy in a grid like this! This may have caused some compromise to the fill though; I’ll admit that I had a particularly tough time filling in the bottom left section of the grid, as entries like ELLE, LOBOS, SMOLT, and SAUD slowed me down.

Throughout the puzzle and clues, there were a lot of other references to letters to add to the “Letterplay,” including:

My favorite non-thematic clue was at 19D: SALADS [Introductory courses]. I liked the play on expectations there! What did you enjoy about this pangram of a puzzle? Let us know in the comments below.

Theme: The letters EX are added to the starts of words in familiar phrases. 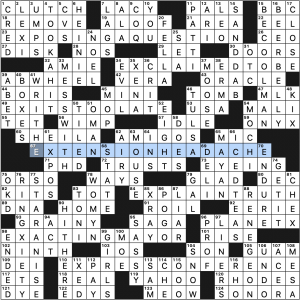 Fairly standard add-some-letters theme. The repetition made solving most of the entries quicker than usual, so the puzzle never felt like it bogged down. That said, such repetition meant I mostly filled in the entries on autopilot without any yuks or ahas. YMMV, of course.

Fave fill includes “BE COOL, MAN,” BEER BELLY, “HI THERE,” PLANET X, SAND DAB, and STAR ANISE. I stumbled quite a bit with RINGXIETY [Condition stemming from excess cellphone use] which I’d never heard before. Wikipedia has it listed as an alternative to Phantom vibration syndrome. I think I prefer the other alternative fauxcellarm. The other new-to-me term was AB WHEEL [Roller for a core workout]. My parents had one in ages past, and as kids, it was a fun toy for us. Never knew it had a name.

Theme: Each theme answer contains the word FIST spelled out between two words. 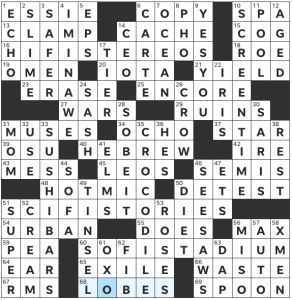 As soon as I spotted the theme here, it completely changed how these words were pronounced in my head because I started emphasizing FIST in each. Words are weird, right? Anyway, these were fun theme answers. I kicked myself for typing LO-FI STADIUM at first in the last, but that was pretty easy to correct with 49d [“Christmas tree trim”] TINSEL crossing to save the day. Also I loved both the cluing in 51a and the fact that 37a [“With 27-Across, franchise with droids and Darths] and 27a gave us STAR WARS to include three SCI-FI STORIES.

I loved how smooth this puzzle was and had a great time with it! The asymmetry worked here really well, giving us SCREEN TIME and SUSHI BARS in addition to the three themers.

That’s all from me. See you in a while, CROCODILE.

THEME: Characters from movies/TV shows are broken across two entries. 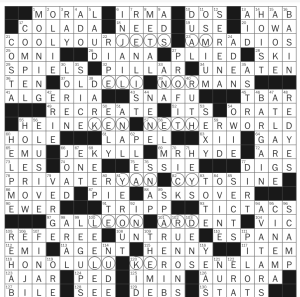 And the thing that sets this apart from similarly themed puzzles is the wild Birnholzian layer:

JEKYLL and MR. HYDE are found spelled out in the first and last letters of the character names (which I’ve highlighted above in blue and red). As awkward as it is for JEKYLL to be missing his deserved title of DR., the theme wouldn’t be possible otherwise. Sometimes sacrifices like that are worth it, as I think is the case here.

That last element is pretty brilliant. Even without that as a constriction on the themers, these types of themes, where a hidden word is broken across two entries are much more difficult to construct than they appear. But with that added layer of needing very specific characters to appear across two common words/phrases? Yowza. And of course it gives each of the characters a split personality in a sense.

So this is a theme that I really appreciated even though I was unfamiliar with many of the characters. And CYTOSINE.

The fill was tons of fun though. And how bout that video clue for EMU? Hilarious! And I love that, once again, Evan is doing groundbreaking things with his puzzles. Including the video as smoothly as he did (and I assume with help from Amuselabs) was an excellent touch to one of the most common crossword animals that we’ve seen clued a gazillion times. In case you missed it, this was the clue for EMU:

I’m starting to get a bit carsick from typing while driving, and it’s awfully difficult to format on an iPad rather than my laptop. So I think I’ll end there, though I realize I’m being cheap by not pointing out so many of the clever clues I enjoyed.

Oh wait… I had beef with the RUN-ONS clue [What commas may fix]. My students overwhelmingly think that throwing a comma sans conjunction in the middle of a sentence fixes everything. So I even made a song about it to help remind them that a conjunction is necessary. So I tell them the opposite of what the clue states. Commas alone typically don’t fix the types of RUN-ONS I see ad nauseam.

Oh yeah.. never heard of the show SEXY Beast, but based on the description in the clue, I’m totally okay with that.

THEME: Actors with the initials PB (the periodic symbol for lead) 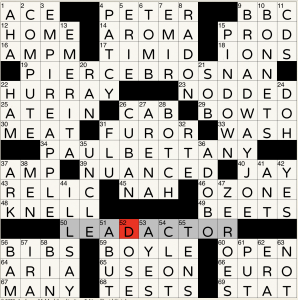 Clever revealer that took me a moment before the AHA lightbulb moment. I saw the initials were the same quickly, but still couldn’t make the connection until a few more seconds than should’ve ticked by.

Second time recently that I’ve seen a “jewel box” mentioned in a puzzle! I always called them “jewel cases.” Am I alone there? Never heard them referred to as jewel boxes until recently.

PAUL BETTANY was unfamiliar to me, and I had ABC instead of BBC which was prohibiting me from seeing BROADWAY JOE, so I found that area difficult.

Like the fun fact for ERIE! I would’ve just assumed there were more fish in Superior.

Fun concept today, with a nifty grid to boot. Thanks! 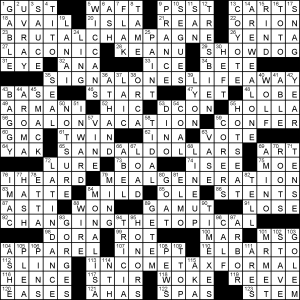