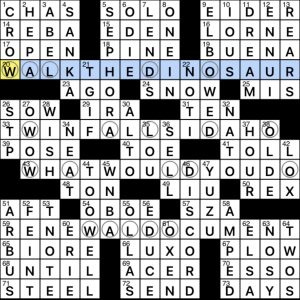 Hello lovelies! This week we’re taking a trip back to my childhood and the wonderful “Where’s Waldo?” book series. Each theme entry contains the letters WALDO in order, not necessarily consecutively. 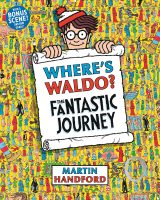 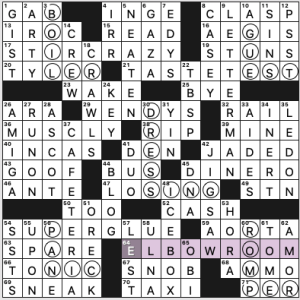 Theme revealer: 64a. [Adequate space to move around … as found in this puzzle’s circled letters?], ELBOW ROOM. The circled letters bend at an “elbow” and each makes a familiar phrase with “room” tacked on: BOILER, GUESTm DRESSING, PANIC, and ROMPER. I’m guessing the constructor (and this might be a debut!) is my age or older and thus has fond memories of TV’s Romper Room.

Not wild about seeing IROC, AGUE, and SSTS on a Tuesday. Zero objection to 26d. [Spanish friend] cluing the feminine AMIGA instead of the masculine AMIGO with nary a hint towards the noun’s gender. The male default is so 1900s! 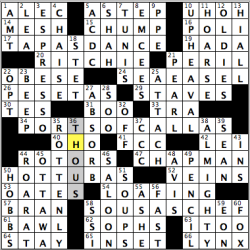 Crossword Nation puzzle solution, Week 485: “As Good As It Gets”

Today’s puzzle could easily been titled “As You Like It,” as puns are created from different phrases/nouns by adding the letters “AS” to them. This reminds me of all the times that I made it to Montréal around this time of the month for the past few years to watch the Coupe Rogers tennis tournament, and the flashing of “AS” on the scoreboard for every time an ace was hit. Man, I miss that place and that beautiful city!

Only thing that really threw me off today was seeing THOUS and not realizing there was a plural form to “thou” (36D: [Big bills, slangily]). Other than that, another grid to admire the long non-themed fill, and, in that category, UPHEAVAL (10D: [Turmoil]) and ALMIGHTY stood out (38D: [Omnipotent]). Can’t wait to be at Arthur ASHE Stadium and the USTA National Tennis Center at this time next week for US Open tennis qualifying (55D: [Legendary name on a Queens tennis stadium]). Oh, did I tell you all that I now write tennis articles on the US Open for the US Open’s website, usopen.org? I didn’t? Well, now you know, and if you head there when the tournament starts on August 29, you will be sure to see at least one article per day penned by yours truly. For a couple of samples of where my mind goes when writing some of these features, click here or here or here. Hope you enjoy!

“Sports will make you smarter” moment of the day: CHAPMAN (47A: [“Fast Car” singer/songwriter Tracy]) – Lots of names and other items to choose from to highlight in this space, but I’ll mention the former NBA shooting guard and current social media influencer Rex Chapman, who rose to Internet fame with a series of videos called “Block or Charge,” where he would post videos of people or animals crashing into other people or animals and pose the question whether, if the incident took place inside a basketball arena, if it would be a block or a charge. In his playing days, he was one of the best guards to play at the University of Kentucky, earning First Team All-SEC and winning the SEC Tourney MVP in 1988. He went on to a long NBA career, averaging 14.6 points per game in 13 seasons, splitting time with Charlotte, Washington, Miami, and Phoenix.

Theme: DECAY (73a, [Crumble away, and a phonetic hint to six answers in this puzzle]). Those other answers are two-word names and phrases with the initials D.K. 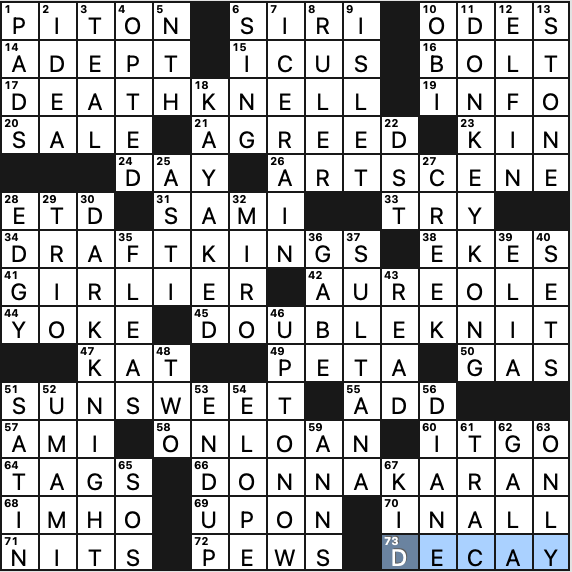 Solid. A theme with six names and phrases—including some that cross each other—is an impressive feat for a 15x grid.

In the fill, I like ART SCENE, SUNSWEET, and SULTANA. I’m not sure I’ve ever heard the term ICE RAIN as opposed to “frozen rain.” The crossing of SAMI [People of Lapland] and MIRO [Surrealist Joan] might be a tough spot for newer solvers.

I really could’ve done without 41a GIRLIER, which still looks gross even with the clue’s attempt to soften it: [Less manly, to insecure macho sorts]. I had a go at excising it but had to resort to a cheater square where the Y in YOKE currently is. I ended up with EKE at what would be 44a and so had to make changes to the right side because it duped EKES. This caused the inclusion of GBS (George Bernard Shaw) at 50a, which isn’t a great entry, but has precedence. Maybe there’s a better configuration I’m not seeing.

My personal reaction to this puzzle was “meh.” Anyone else think it was more Monday-ish than Tuesday-ish? The pattern to the theme was immediately evident, so there was no challenge or “aha” moment to solving the rest of the themers, and while there’s wordplay in the clues it wasn’t enough to really hold my interest.

Each theme answer is an adverbial phrase where the second word repeats the middle of the first. 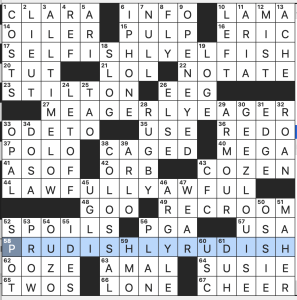 Company walking in our door…..so that’s it for me! 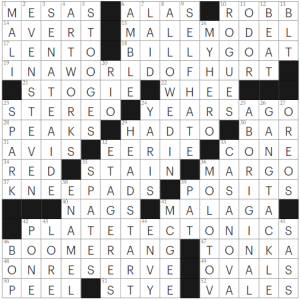 A nicely constructed puzzle here, featuring a few entries that felt edgy in that I can’t recall seeing them before in crosswords. Stuff like the dark 9d [Subject of some intrusive thoughts] SELF HATE (which I first filled in as SELF HARM, so maybe it wasn’t dark enough for me!) and 26d [Take down as a team] GANG TACKLE, which feels rather violent.

Another one is the marquee entry, the colloquial IN A WORLD OF HURT (19a [Facing serious negative consequences]).

The other, symmetrical marquee entry is the seemingly-but-not-really-more-benign PLATE TECTONICS (42a [Theory that explains why earthquakes don’t occur everywhere on Earth]). It’s a question of scale, isn’t it—geologic and temporal.

The grid features midlength entries in all four corners and a staircase of fives traversing the center.

Very smooth fill today, though the themer was more challenging for me than usual yet not too tough of a puzzle, which is just what I needed today! 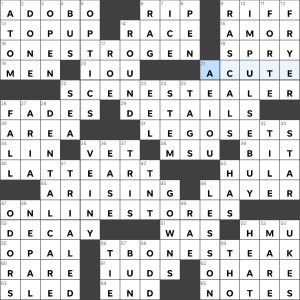 Theme: each themer contains the word NEST, a type of home

Today’s excellent themer took my a couple of minutes after completing the grid to figure out what was going on. The title is a great hint, so I was looking for “home”-related words or partial words within the themers and as soon as I saw the …ST… in common, very quickly then …NEST… was clear. Great cluing allowed me to easily drop in ONESTROGEN, SCENESTEALER, and ONLINESTORES but I had to chew on TBONESTEAK for a while, until I had some small bites of it via crossings. New York strip steak is my go-to, though it’s been a very long time since I’ve had one so steak of any kind just wasn’t at the forefront of my mind today.

Loved the collab! Enjoyed the slightly tougher themer, awesome grid design and fill throughout, fun themer set, and excellent cluing. Hope to see more from Ada and Rafael in the future! 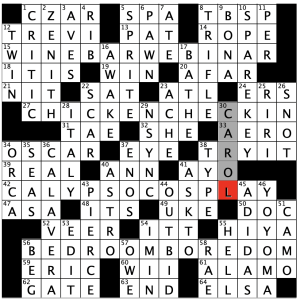 A familiar theme-type today, but handled very well. Most of the entries here are quite lively! I liked the first three the best, particularly CALYPSO COSPLAY. I’m sure Odysseus wouldn’t have minded that dress up activity after being stuck on Calypso’s island so long against his will kinda-sorta-not-really.

I often find Brooke Husic puzzles take me more time than usual, this one being no exception. The cluing is unique and more often or not there’s something to learn. Today the unfamiliar entries (for me) were CALAVERA, AYO Tometi, and… wait is that it? I think so. Maybe just hit a lot of hard clues for me?

Showing my age that I wanted [“Desperado” singer, to fans] to be something about The Eagles or Linda Ronstadt. And really had a lot of difficulty getting a foothold up north. Had EDITOR for [Professional critic] and that started a big hot mess, so I jumped to the south and moved up with fewer stumbles.