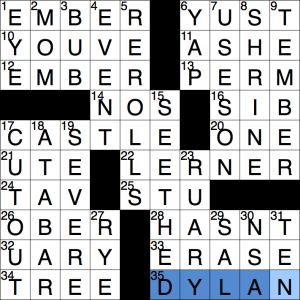 hello and welcome to episode #741 of matt gaffney’s weekly crossword contest, “Time Travel”. i’m back in the drivers’ seat this week; thanks to matt for filling in for me last week when i forgot to blog (or even solve) the week 1 puzzle. i was traveling until monday and then just got all confused about what day it was. anyway, for this week 2 puzzle, matt challenges us to find a country where I’d like to spend four months. interesting. what are the theme answers? it’s a curious puzzle—in this 10×10 grid, there are a bunch of entries that are the names of months with their first three letters chopped off, each clued as a “good time to visit” some country:

what’s going on here? there are a number of unusual features, including the repeated EMBER and the doesn’t-quite-fit-the-pattern YUST. the basic idea seems to be that a “good time to visit” a country is a month that starts with the same letter as the country: oman in october, japan in january, spain in september, fiji in february. that disambiguates the two EMBERs, as namibia would logically go with november and denmark with december. as for jamaica and azerbaijan, that’s actually two months, july and august; but july without its first three letters is just Y, which couldn’t be a grid entry on its own, so it was combined into a two-month trip (to two countries that are nowhere near each other geographically!). figuring out what was happening with the Y there took me a little while, as the 6-down clue {Shoot the breeze} could have clued YAP (as it did here) or YAK or GAB or even JAW. when i had some idea what was going on with the theme, i figured it had to be GUST at 6-across since that’s the end of a month, but it’s not quite the same thing as the others, since without AUG, it should be just UST. but then also GAB would require the {Long-lasting hairstyle} at 13-across to be BERM instead of PERM; BERM is a word, but doesn’t make any sense as an answer there. anyway, all took a while to sort out: it’s YUST, but really Y + UST, i.e. julY and augUST.

anyway, with all that said, what’s the meta answer? we’ve accounted for eight months in the calendar, the missing ones being march-april-may-june. it’s definitely noteworthy that those are consecutive, so that must be the four months that are referred to in the instructions. removing the first three letters of each month to follow the same pattern as the theme, we’re left with CH + IL + [nothing] + E. that spells CHILE, which is the meta answer. i’m sure fall in chile is lovely.

i really enjoyed this meta. it feels like a wholly different mechanism from anything we’ve seen before, based on the observation that if you remove the three-letter abbreviation for each month, the resulting stubs include four straight that spell out the name of a country. that alone is a curiosity, but the way matt turned it into a meta had enough twists and turns and cogitating for a week 3 or 4, except the options were limited enough at every stage to slot in neatly at week 2 difficulty. even the goofy YUST entry added to the enjoyment, as i found it to be quite fun to work out what was going on there.