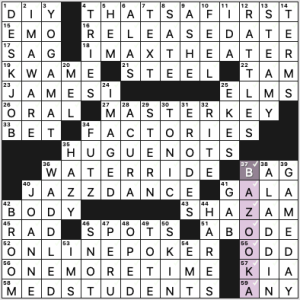 I had some doubts about this grid since the NW and SE corners are fairly cut off from the rest of the venture, but it ended up not posing any trouble to me. And the center swath with stagger-stepped 9s, a thing of beauty. Stacked 11s, also on my “yes” list. So much good fill!

What else? These five: 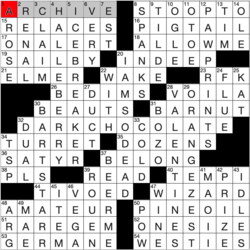 It’s lovely to know that Rich Norris is enjoying his retirement in part by still puzzling — now as a constructor and not the LAT editor! Back in the early to mid-aughts, Rich gave me a lot of great commentary when I first got into constructing, and I still have an extremely soft spot in my heart for him. Especially since he’s apparently the only LAT constructor all year who can make me do battle — I’m pretty sure this is the first time I’ve gone past the 4-minute mark on an LAT puzzle this year. So thanks for the good fight, Rich! 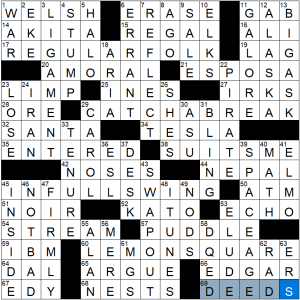 Quick today, but say hi if you’re at Lollapuzzoola!

The final words of our themers are types of dance:

I’m a fan of the symmetric placement of the 2- and 3-word themers. This is a nice idea for a theme, and the themers do well to use the “dance” words in meanings away from the dances. I can’t think of too many other dances that lend themselves this way; perhaps FIGHTING IRISH, INDIE GOGO, and something with -LINE. So this may be a pretty constrained set that remains approachable and clear for solvers. I like it! 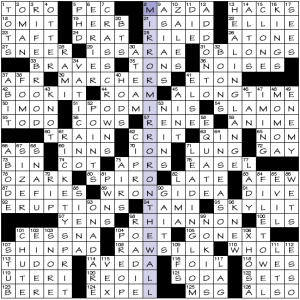 The central vertical entry suggests the theme mechanism: 8d [Prelude to a question about fairness?] MIRROR MIRROR ON THE WALL. What’s going on is that the themed vertical entries on the left side have their two Ls replaced with Rs and vice-versa for the right side.

Took me a while to see what was going on, but RICKETY SPRIT set me straight. 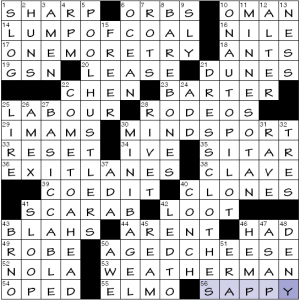 I’m a bit wiped out, so just a short recap here.

This one proceeded slowly but steadily. The biggest impediments were near-dupes that I resisted filling in until I became stymied:

How do you feel about those?

Good workout. Rest time. Or maybe coffee. Or both. 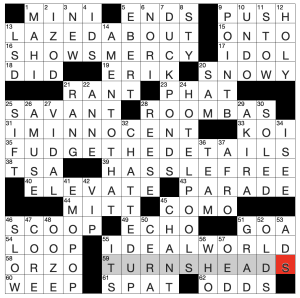 A breezy themeless today, hardly giving any pushback for me. I went through this quickly, pausing only at AKIRA Kurosawa and VIDAL after trying for a while to figure out the name hidden [Author in “Livin’ La Vida Loca”?].

Coulda done with out GO A in a themeless. PHAT, while certainly 90s, was really only around for a very short time. I hate to ascribe it to the entire decade. HOTEL POOLS isn’t something I think of as a stand-alone phrase, especially in the plural, so a bit of a bummer to see that taking up as much real estate as it is.