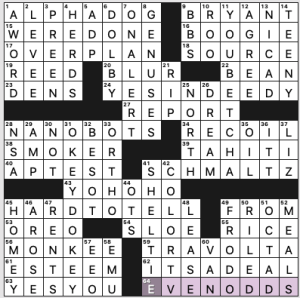 Instead of a themeless, we get a sort of doubly-themed stunt puzzle. In addition to the “Yes!”/”Yes”/”All right”/”Maybe” sequence in the 9s and 10s (YOU BETCHA! – YES, INDEEDY – OKEY-DOKEY – HARD TO TELL) the entire grid is thematic:

It’s an interesting-looking grid with lots of flow between sections, and generally smooth fill throughout. BESOT, OCTAD, and EEO are kinda blah, and there’s a “YES, YOU” that dupes both YOU BETCHA and YES INDEEDY. But I do like the four longest answers as well as ALPHA DOG, OVER-PLAN, BOOGIE board, SCHMALTZ, TRAVOLTA, and SHELTIE. 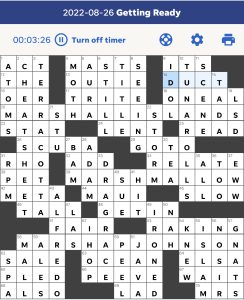 Rafa posted on Twitter that the copy editor had made one small change to the puzzle’s title, and based on the marshy start to each of these, I guessed that it should be “Getting Reedy” instead of “Getting Ready.” If I’m wrong, I’ll be sure to update this later.

I think it’s an impressive theme since none of these themers are particularly marsh-oriented by themselves. Plus, we’ve got the full noun set: a person, place, and thing. I liked, though, that Kathy Jetñil-Kijiner was mentioned as part of the clue for MARSHALL ISLANDS since I had not heard of her before.

This grid is asymmetric, which lends itself well to the three similar beginnings of each theme answer. Plus, we got the really lovely CHEAT SHEET and TERRACOTTA in the left side of the puzzle, both of which were just great content. I also enjoyed TUNA ROLLS hanging out in the northwest corner. 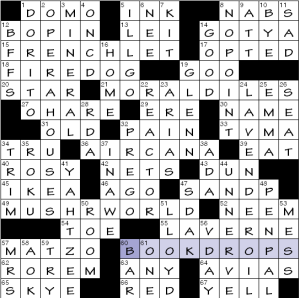 Theme: Familiar phrases are re-imagined as items you wear in certain weather situations. 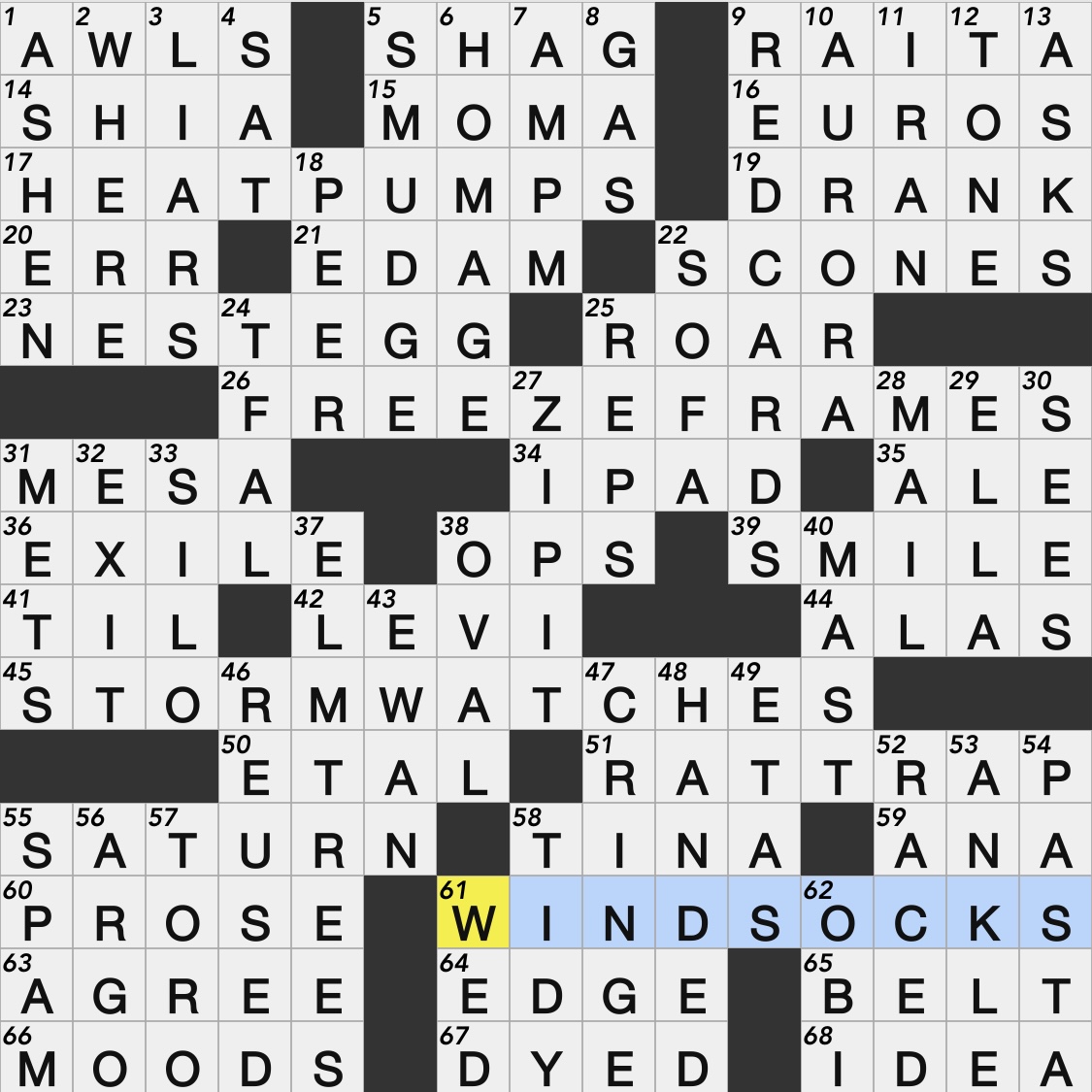 Now that’s a nice, tight theme. Granted, two of the items aren’t articles of clothing, but they are items you wear. And granted, you don’t wear “frames,” you wear “glasses,” but I think a little leeway can be arranged. The fact that each phrase has a weather-related first word really seals the deal. Our constructors even managed to tie the entries to all four seasons. An elegant touch, that.

Nice fill, too: RED CARDS, ELM TREES, NEST EGG, RAT TRAP, SATURN, “ZIP IT!” I did not know RAITA [Indian yogurt dish], though I’ve probably seen it before in a crossword and I’ve probably even enjoyed eating it as well since I partake of Indian food now and again. Here’s a basic cucumber RAITA recipe that sounds good for summer. 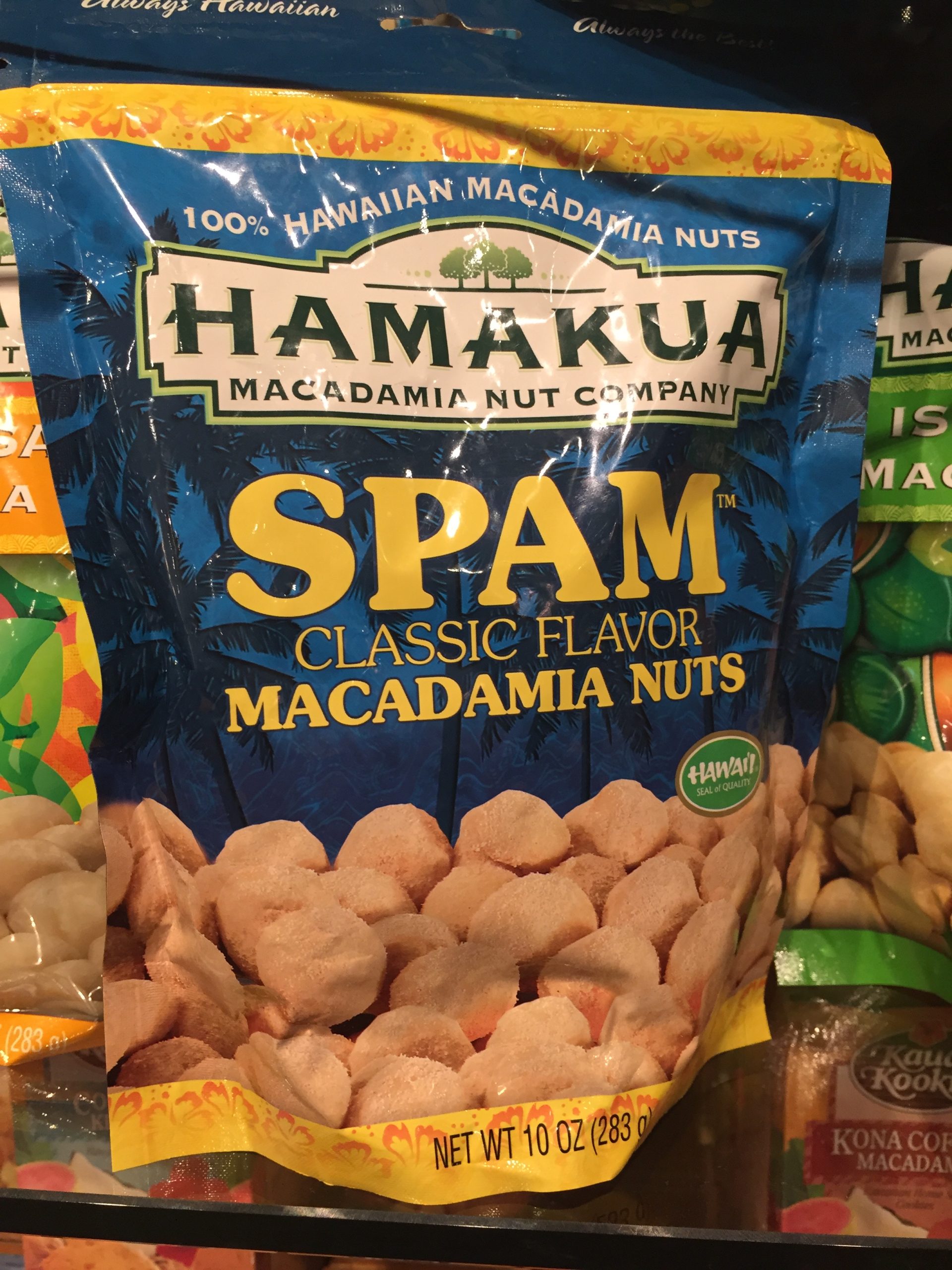 Nice puzzle all around. Four stars. 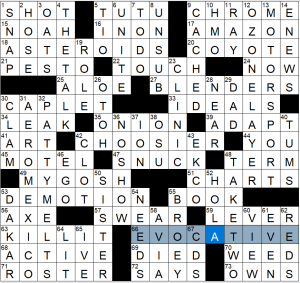 This week’s themed offering from the New Yorker comes from David Steinberg. Each entry can be parsed as a letter of the alphabet+a word to form a new word:

Constraining the set a bit is the “multiple choice” element; we can imagine the answers including the multiple choice label: “A – Steroids” and so on.

I’m in New York City for Lollapuzzoola this weekend, and solved this with my friend Brooke Husic, who wondered with an editor’s eye whether it would have been possible to find five such entries all from the same topic, such that they could putatively be from the same test. Certainly would be a cool theme set, if anyone can pull it up.

The grid is 16-wide to accommodate the eight-letter central themer, and we’ve got some long stacked bonus entries in the corners — my favorite of which is AEROMEXICO — but even with that space I found the grid a bit chunky to navigate through — CHOOSIER is a bit walled off, and I didn’t get into a flow in the middle. I also think this was clued a bit tougher than the last few Friday’s from the New Yorker, and I haven’t done a puzzle from David in a little bit. But I also cottoned onto the theme from the jump, and enjoyed my solve plenty looking forward to each successive themer.

I’ll pass on notes today. Have a good Friday!