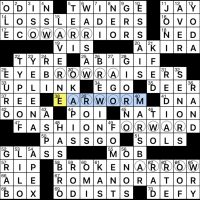 Hello everyone! This week’s Jonesin’ theme involves mixing up the letters of the word ARROW, as found in the circled squares. 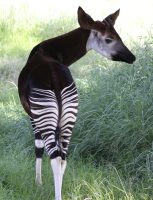 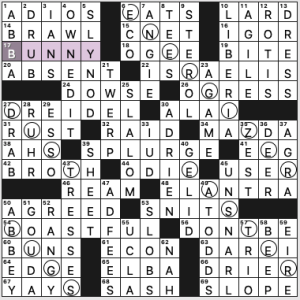 The theme revealer’s split into an asymmetrical pair, given the many constraints posed by the diagonal theme entries: 17a. [With 69-Across, beginner’s downhill challenge … or a hint to this puzzle’s circled letters], BUNNY / SLOPE. The circled words on the diagonal give us the ENERGIZER Bunny, a DUST bunny, the EASTER Bunny, and BUGS Bunny. Hop, hop!

Fave fill: OWNED IT, SLY NOD, DREIDEL, LIBERIA, SPLURGE, IUD (feels like there were decades where IUDs were somehow deemed too risqué for the daily crossword, and I appreciate that we see it now).

A smattering of fill feels tough for a Tuesday: OGEE, ALAI, RUHR, ESSO, STEROL, GELID. I wish the puzzle had been slotted on a Wednesday given that fill (and then tougher clues overall).

Three stars from me. Bunnies! 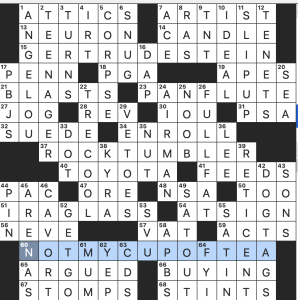 And a cute revealer to tie it all together: 60a [Dismissive response when offered chai in the ends of the answers to the starred clues?] is NOT MY CUP OF TEA.

Theme: Things that are BIG BREAKS (34a, [Performer’s career-making opportunities, and a hint to the starred answers]). 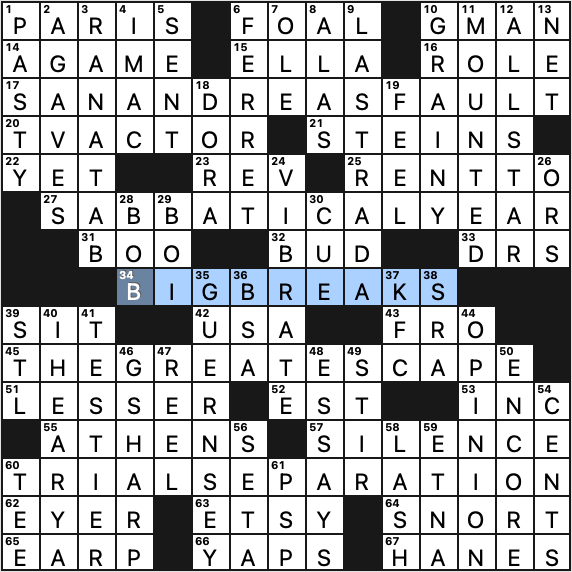 Didn’t we just see BIG BREAK somewhere? Anyhoo, I enjoyed this. Each one uses “break” slightly differently, and I would consider all of them big deals within their own contexts. A nice set.

The nine-letter central entry bisects the grid and results in no long non-theme fill, but we have some nice mid-length entries like “I HEAR YA,” LA STRADA, and GUERNSEY. 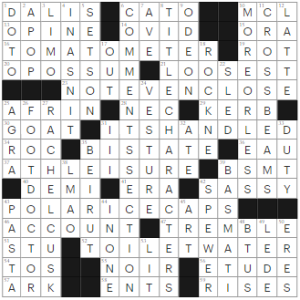 This was a chewy puzzle, with just enough bite. Let’s call it al dente.

There are quite a lot of long entries stitching it all together. First up, a pair of grid-spanning verticals: 6d [Where everything may be in moderation?] COMMENTS SECTION (I had COMMENT SECTIONS for a time), 8d [Ones with their names on jackets] TITLE CHARACTERS—great clue.

Next, some of the acrosses: 16a [Movie-rating scale with a green splat icon] TOMATOMETER. This is proprietary to the Rotten Tomatoes website (19a [Poppycock] ROT); either green splats or whole red tomatoes, depending on which side of a certain critical percentage they fall on. 23a [Very cold, so to speak] NOT EVEN CLOSE. 31a [“You don’t have to worry about that anymore”] IT’S HANDLED. 43a [What one has to go to the ends of the Earth to find] POLAR ICE CAPS; that’s more of a North Pole thing. Incidentally, latest news is that Greenland ice sheet is melting even faster than predicted, which will have dire consequences. 52a [What a misbehaving dog might drink] TOILET WATER; no breakfast test here!

Finally, there are stacked 10 pairs running down in the northeast and southwest: MORE OR LESS/CROSSBEAMS and FOOT DOCTOR/RACHEL CUSK.

THEME: Words spelled backwards to form a different word are put together to create a wacky phrase. 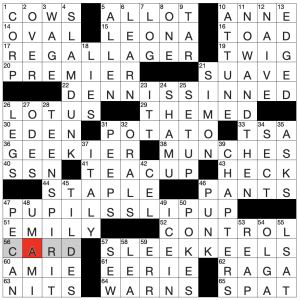 Universal crossword solution · One Way and Another  · Catherine Cetta · Tuesday. 08.30.22

Harmless puzzle with a familiar theme type, though I don’t think I’ve seen it too recently. I more often see an anagram of a base word abutting it to create wackiness. These are… semordnilaps I believe?

But about that wackiness, neither the answers nor the clues seem that wacky at all, right? Perhaps that’s why they’re clued with an asterisk instead of the traditional “?” The thing is, for this theme type to land, I prefer the go big or go home on the wackiness. And this definitely doesn’t go big. REGAL LAGER is the wackiest of the bunch.

Thanks for this one :)

Lovely, quirky gird with a stellar theme and themer set! 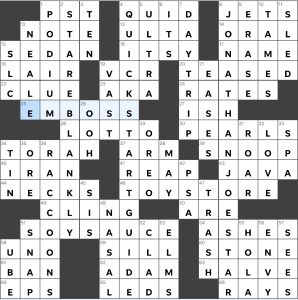 Theme: each themer contains the word STAR, which are also in downs today and so are descending

With the themers in the downs, I had filled in portions of each filled in so when I got to the first two, I immediately completed them though probably would have any if I had started with the downs today. STAREBLANKLY is a great beginning themer, especially since it pertains to staring into the void. An excellent QUICKSTARTGUIDE can be instrumental in a smooth set up or learning a new process—I’ve certainly written a few and its always worth the effort (and often prevents questions). JONATHANJOESTAR had me stumped and actually my last letter placed was the T in it, since the crossing just wasn’t helping and I didn’t know the reference. In addition to the overt hint in the title, the ordering left to right of the themer set means that the STAR in each themer falls lower in each consecutive one, beginning at the top of the grid and descending all the way to the bottom. Truly out-of-this-world!

Stumpers: TOYSTORE (“online” or “lego store” came to mind first), CLING (stumped, thinking “grasp”, so needed crossings), and ASHES (cluing had me food-focused so I kept thinking about “bones” or “crumbs”)

Loved everything about this puzzle, its grid, and bonus fill. Excellent collab and I hope that we see more from them!