Today’s theme answers are familiar(ish) phrases that include words that are also names of web browsers. The clues allude to historical events (and a rough time frame) which explains the revealer BROWSER HISTORY (51a, [Surfing records, and what 20-, 25- and 46-Across are part of?]). 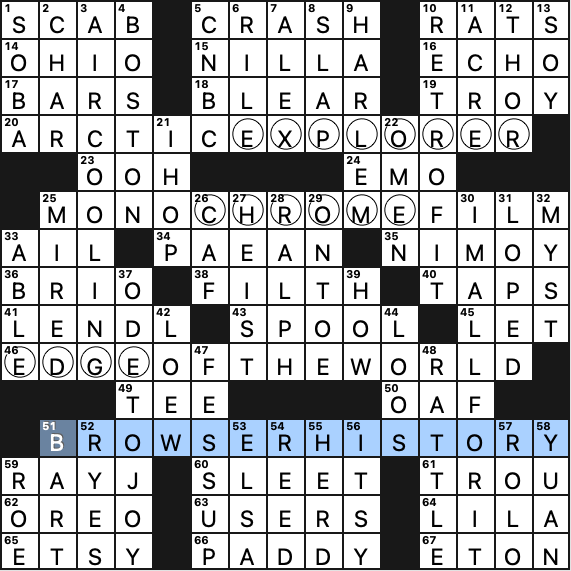 Hmm. I’m not sold on this one. The revealer clue says that each of these entries is part of BROWSER HISTORY, but try as I might, I can’t make the term ARCTIC EXPLORER (or the others) fit into that description. Explorer is definitely a part of BROWSER HISTORY (especially since no one uses it anymore), but ARCTIC EXPLORER is not. It’s more like the entries have a browser plus a side of history.

Oh, and I don’t get the date for the Flat Earthers. Surely people thought the Earth was flat well before that. In fact, according to the Smithsonian, some knew the Earth was round since the 6th century B.C.E., so surely others before them assumed it was flat. I’m just not clear what the clue is getting at.

Lastly, the theme offers up two Microsoft products and a Google product. I would’ve liked  to have seen something else in there instead of two Microsoft entries. Opera and Safari seem like decent possibilities for this theme.

For some actual BROWSER HISTORY, check out this video chart I recently saw on Reddit showing the market share of each browser in the past 28 years.

Top fill includes “I’M ALL FOR IT!” and ODE TO JOY as well as FESS UP and HARLEM. Didn’t know proper names LILA Wallace (co-founder of Reader’s Digest) nor RAY J [R&B singer with the 2008 #3 hit “Sexy Can I”]. (Seemed like the grid was heavy on proper names, as well.) PAEAN is a word I’ve heard before, though I couldn’t have told you it meant [Triumphant hymn] before I did this grid.

Clue of note: 17a. [Cell feature]. BARS. I suppose the clue is referring to cell phones and signal strength. If it was referring to a cell in a prison, then I’d say it needed to be plural.

Maybe I’m being dense, but the theme felt off for me. Three stars. 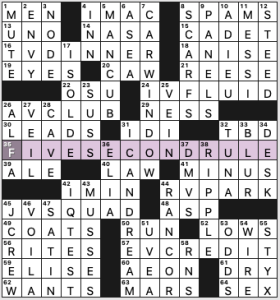 This is a Roman-numeral theme: The FIVE SECOND RULE (whereby you can eat food that’s been on the floor for no more than 5 seconds) ties together six themers where the letter V (Roman 5) is the SECOND letter, always with the phrase’s first two letters being spelled out: TV DINNER, IV FLUID, AV CLUB, RV PARK, JV SQUAD, and EV CREDIT. The V’s in question stand for -vision, -venous, -visual, vehicle, varsity, and vehicle. The theme would feel more elegant if the 8s had been omitted, given their duplicative V words. How and odd is it that VEIN crosses the V in IV FLUID? Also, health-care professionals: Does the mass noun IV fluid sound right to you, or do you prefer plural IV fluids? (Maybe you just call it saline or Ringer’s.)

Note that the grid is 14 squares wide, so I hope you shaved a few seconds off your usual Wednesday time! 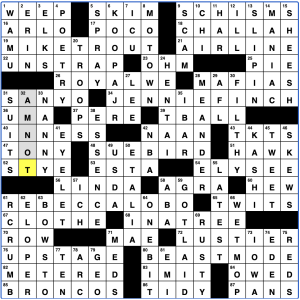 This week’s AVCX Classic is from editor Ben Tausig, and it was a 2/5 difficulty that played pretty nicely:

As a non-sports person, catching the theme early made it easy to fill in the gaps of my knowledge of these players with some educated guesses, and the crossings here were very fair in helping with that.

Michael Sembello’s “MANIAC” (14D, Hit single from “Flashdance”) was his only hit song and was nominated for an Oscar. 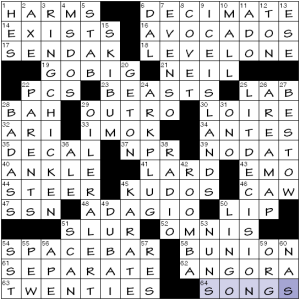 Let’s parse the title first. “Down + SP out” translates to ‘down entries with the letters SP taken out’. In each case, the SP bigram appears at the beginning of the phrase.

Spiffy or iffy? You decide.

So the natural choice here is “Goodbye to You” by Scandal, but it’s just too unnaturally ’80s, so here’s something a little more organic: 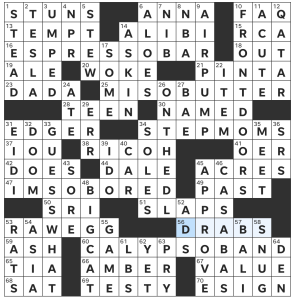 Some quick takes on today’s puzzle: 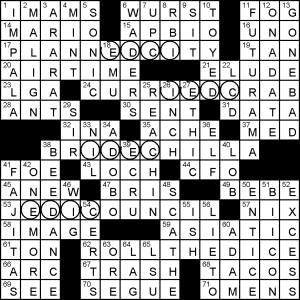 The theme concept at least in today’s puzzle by Shannon Rapp is fairly simple and well-worn. We have a revealer, [Take a chance, and how to form the sequence in each set of circled letters], ROLLTHEDICE preceded by four long across entries. Each of those has the DICE tetragram scrambled between two parts of the word/phrase.  The choice of entries though felt more imaginative than normal, with some creative choices: