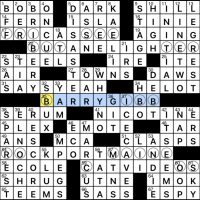 Is it all right to include two names for the same thing in a theme? FRISÉE is very closely related to lettuce so I think that’s acceptable for a theme, but ROMAINE and COS are the same type of lettuce. 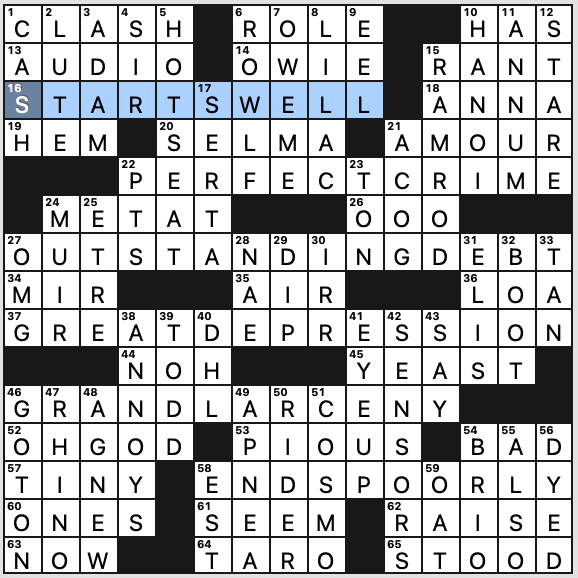 Nifty theme! I was surprised to come across a revealer so early in the solve but then realized it was only telling half the story. I looked forward to uncovering each theme entry to see what was next. And I amused myself by saying each first word excitedly then each second word dejectedly. Try it, it’s fun! 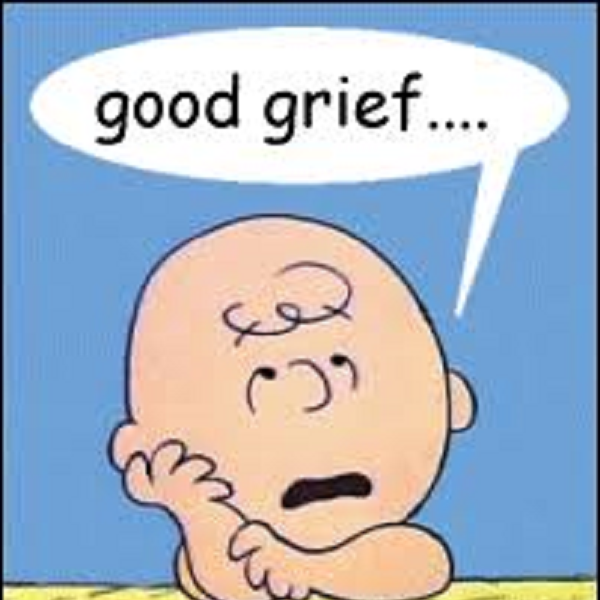 Really impressed that our constructors managed to fit that much theme material (including two grid-spanners) in one grid, and all in the Across direction. Good grief!

The long fill isn’t especially sparkly—one wouldn’t expect it to be with that much theme material. But it gets the job done. HOT SEAT is certainly nice, as is RAMROD, and the movie OH GOD!, which I learned was directed by Carl Reiner. I remember seeing that in the theater with my family when it came out back in 1977 and enjoyed the chemistry between John Denver and George Burns. Oh and hey, crossword staple Teri Garr was in that, too, playing the long-suffering wife (similar to her other 1977 role in Close Encounters of the Third Kind).

Anyhoo, back to the grid. I feel I must point out A COG as an example of an unsavory partial, but it’s quickly gotten past and the rest of the fill is fine. Again, with a lot of theme material, there’s bound to be some compromises.

Clue of note: 59d. [Milk type]. OAT. Speaking of OAT milk, it does very well when comparing the environmental impact of the productions of various types of milk. You can read more about it here. 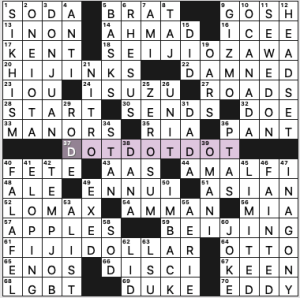 Feels like this is one of the easiest NYT puzzles I’ve done in ages (caveat: I don’t typically do the Monday). It surely helps that I picked up on the theme pretty quickly:

The corner stacks of 7s aren’t so common in early-week puzzles, but their clues and answers all felt quite pliable to me. Heck, I’d just had FALAFEL for dinner tonight.

Editor:  Erik Agard
Theme: Each theme answer starts with DI and ends with LL, so the answers are literally with a DILL pickle. 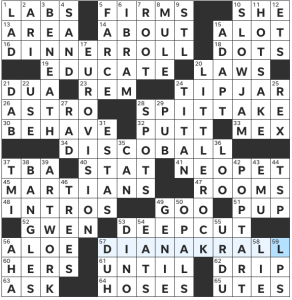 Hey folks, Sophia here! From now on I’ll be writing up the USA Today Tuesday puzzles, and Emily will take over the Thursdays. I’m hyped that my first Tuesday is a Brooke and Matthew puzzle, since they’re two of my favorite puzzlemakers around. The theme is cute (even for a pickle hater such as myself) and it’s also not immediately obvious, which leads to a fun “aha” moment for solvers. DIANA KRALL was new to me, but the crosses were all fair. DISCO BALL was my favorite answer, and I kind of wish the clue was a bit jazzier to go with it.

Today’s puzzle has a very oddly segmented grid shape – if you imagine a black square at the O in DISCO BALL, the puzzle would be two completely disjoint pieces. This is not my favorite style for easier puzzles, because it limits the amount of help that solving any section of the puzzle will give you and makes it easier to get stuck or “locked out” of a corner you can’t find a foothold in.

That being said, the cut-off corners allow for smoother fill overall, as well as lots of fun long bonus answers. Today, I loved seeing LITTLE ROCK, EUROVISION, SLOW JAM, DEEP CUT, and HOT SAKE, which I had not heard of before. There were actually lots of new things to me in this puzzle in the clues and answers: 21a [Prayer to Allah] for DUA, [Qaumi Taranah language] for URDU, and 38d [Accessories for Garba dancers] for BANGLES, to name a few. 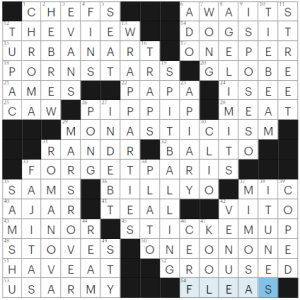 This pinwheel grid served up a moderate challenge, as advertised.

Again, a good workout and a satisfying crossword.

I thought I knew what was going on and I was not entirely right. I like an early-week puzzle with a revealer that makes me say “oh!” in a good way. This one definitely qualifies.

The theme answers are a bit beastly. 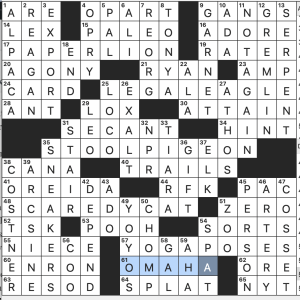 Birds and felines! Two of each, nicely symmetrical. That’s not all, though. 57a [Asanas found at the end of the starred clues] are YOGA POSES. I do not do yoga. I’ve heard of PIGEON pose and CAT pose. Lion pose apparently involves the tongue And I think you’re supposed to roar, as well 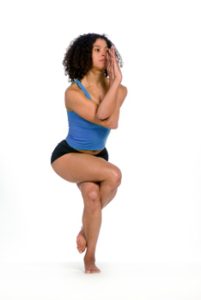 Never will I ever

I liked this! All the theme answers are solid, although I suspect the Plimpton book is not familiar to younger solvers, and the revealer was fun.

What I didn’t know before I did that puzzle: see above re: yoga poses. I had also never heard of Zesty Curly frozen French fries, and now I think I’ve been missing out. 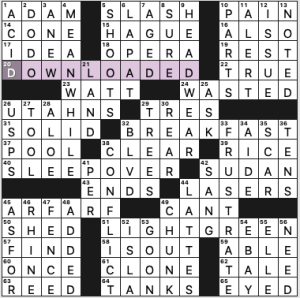 The title explains the theme: The clued phrases are given the old switcheroo, and their two halves are flipped to form familiar words/phrases.

Overall, the fill’s pretty smooth, though UTAHNS is a word that many of know only from crosswords, LAP AT is overused in grids (as is HIT AT), and “ARF, ARF” looks weird to me.