This week we’re looking a character from stories. There were five starred theme entries:

We had five literary characters, so what was the next step? Jacob Marley was a character in A Christmas Carol (ACC), and I remembered that Lady Brett Ashley was a Hemingway character. Quick Googling reminded me that she was a main character in The Sun Also Rises (TSAR). I had the rabbit hole: the initials of each literary work mapped to a grid entry with one letter finishing the story: 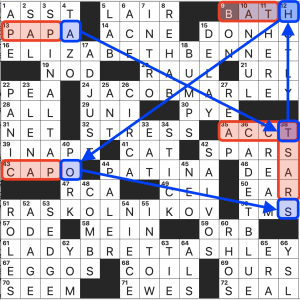 The appended letters spell ATHOS, our contest solution. Solvers: which literary work unlocked the meta for you? Please let me know in the comments.