Our theme today consists of song titles that build from “silence” to a “shout.” Musical notation in parentheses reinforces the increase in volume. 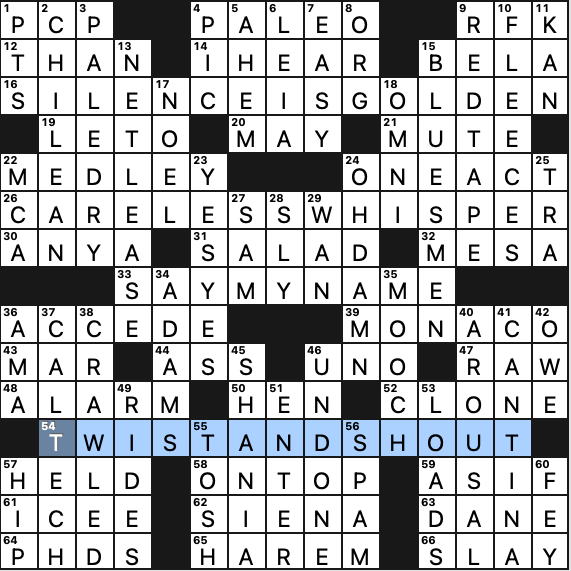 Nice theme. I’m not musically inclined, but between the title and the musical notation, I figured out what was going on. By the way, (ppp) stands for pianississimo (very very quiet), (p) is piano (quiet), and (fff) is fortississimo (very very loud).

It would have been nice if there was one more entry on the loud side, but I can’t think of a word that would be between “say” and “shout” volume-wise, let alone a song title. Unless the “shout” entry was marked (f) and another entry got the (fff), say Billy Idol’s “Rebel Yell.” Katy Perry’s “Roar” would be better thematically, but it’s an unfortunate four-letters long, which wouldn’t work with the left/right symmetry in this grid.

Stacks of sevens in the corners are mostly nice. I especially liked BLUESMEN next to RED TAPE as well as CANTINA, CALTECH, MONACO, and OH DAMN [“Did that really just happen?!”], though I wanted it to be “OH SNAP!” And MEDLEY deserves a shout out for being theme-adjacent. Never heard of the term NET LEASE [Commercial realty agreement] which is a situation where the lessee pays for taxes, insurance, and maintenance costs in addition to rent. 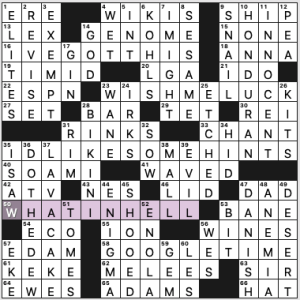 What a fun theme! Debut constructor Ekua Ewool takes us through the emotional journey of a new solver tackling the Monday through Friday puzzles:

So tell me: What does the newbie say when the Saturday NYT puzzle hits? 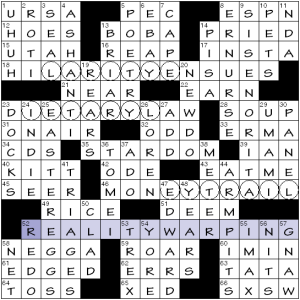 On the one hand, I’m impressed with the quality of the phrases—they’re in-the-language and they contain a relatively long string of required letters. On the other hand, the revealer feels weak and forced.

Editor:  Erik Agard
Theme: Each theme answer starts with a word that can precede BRAID. 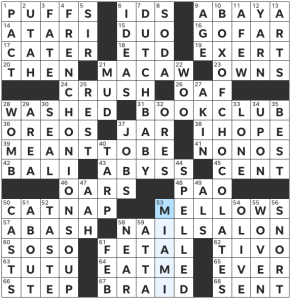 Cute theme, and good title! I know all of these hairstyles so this wasn’t too much of a stretch for me, theme-wise. I liked that all of the theme answers ended up being types of food – at first, I thought that the theme was going to relate to that.

It took me a while to get going on the puzzle. There were a lot of words or clues I was unfamiliar with, such as ABAYA or Hilton ALS, and there were also a lot of clues in which I went off in the wrong direction: for example “prove” instead of EXERT for 19a [___ yourself (put in effort)] and “Tampa” instead of MIAMI for 53d [Major city in Florida]. So this one ended up playing harder than the usual USA Today fare for me, but I enjoyed the challenge! 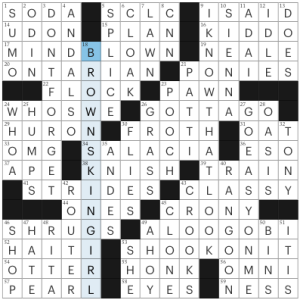 I forget where my Wednesday New Yorker solving times usually land, but I think the “lightly challenging” should feel a bit easier than a Friday NYT. This one was right up there in the Fri NYT zone.

Entirely new to me: 34a. [Experimental film by Tourmaline about Mary Jones, a Black trans woman who lived in nineteenth-century New York], SALACIA. Salacia is also the name of a Roman goddess of salt water, not that I’d heard of that. Here’s an article about the film.

4.25 stars from me. Fun puzzle with lots of layers to it. 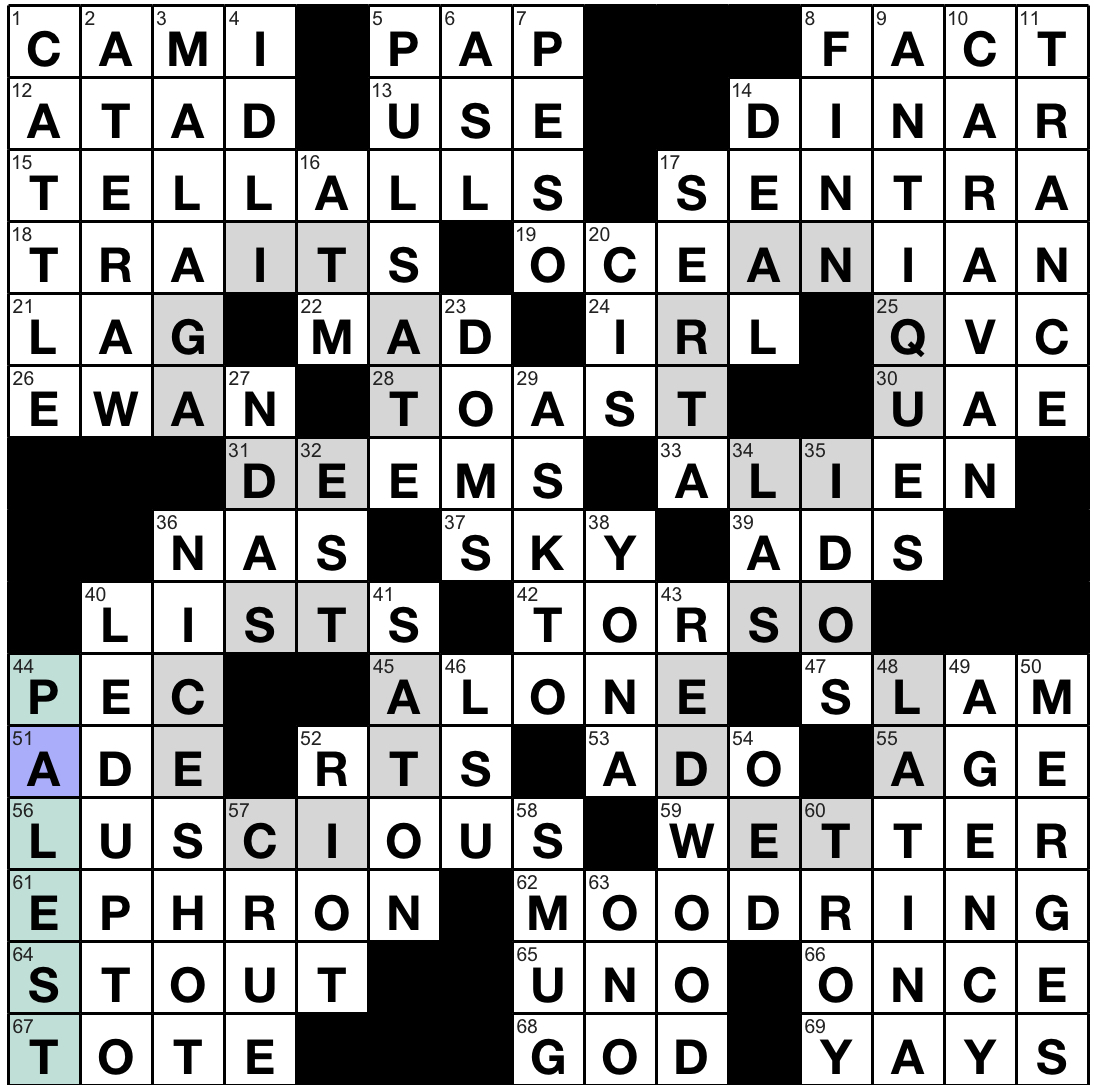 This week’s AVCX Classic from Rebecca Goldstein and Brooke Husic was a super smooth 3/5 difficulty.

I always love a puzzle that uses a non-traditional layout to get the point of the theme across. Rather than having a few long answers and a revealer, today we get a revealer and 4 ‘RINGs’ as the themed entries.

My only nitpick here is the choice of moods felt a bit random – but the puzzle was fun throughout and the ‘aha!’ moment when I got to MOOD RING was entertaining enough to make the puzzle great.

No surprise that there was some really fantastic cluing throughout the puzzle – my favorites:

Here’s some Mötley CRÜE for your Wednesday 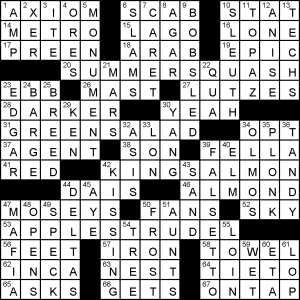 Susan Gelfand’s puzzle theme is quite basic. Four two-part’s foods’ first parts are surnames of singers. Given surnames are quite commonly basic nouns, this seems a low bar. In any case, we have:

In general, this puzzle offered little resistance. There were a few trickier clues/answers, though: [Toepick-assisted skating leaps], LUTZES named for skater Alois Lutz; [__ Valley: puzzle game with optical illusions], MONUMENT was new to me, but I’ve heard of the place. It appears it’s a puzzle >video< game; [“Mayans M.C.” star Edward James __], OLMOS also rings only the dimmest bells.