Theme: The letters EX are added onto the ends of certain words in familiar phrases. 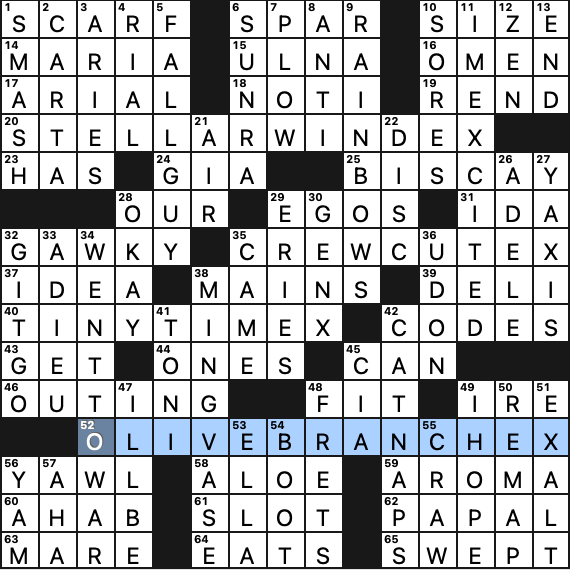 If you told me the theme was about adding the letters EX, I’d have guessed they would be tacked on at the beginnings of phrases.  So I found it a little surprising—and interesting—that they’re added at the ends here.

And as slow as I am, I just realized that all the changed words became brand names, and that tightens up the theme tremendously. Now I’m inclined to look much more leniently at that last one, and the title makes a lot more sense rather than being just a play on the term “Brand X”.

(Missing brands: Rolex, Kleenex, Kotex, and Durex. What is it about ending your brand name in EX that’s supposed to make it appealing to would-be buyers?)

Lovely long fill today: FALL GUY, RAINBOWS, “I’M EXCITED,” WENT TO WAR, MING VASE, CATNAPS. A couple crossings may be tough for some: BISCAY [Bilbao’s province] crossing the Y in Y-AXIS [The abscissa is the distance from it], and SUN RA [Jazz legend with an “Arkestra”] with the A crossing the proper name GIA [Supermodel Carangi]. 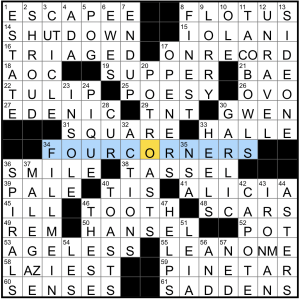 I’ll say up front that I am biased towards liking this puzzle, regardless of the overall content or execution.  Exhibit A: the space on my souvenir board where a FOUR CORNERS magnet would reside, save for the fact that it’s literally in the middle of nowhere and I haven’t made that particular journey yet.  But needless to say, I am a Road Trip Junkie, a bottomless pit of Americana Adulation, and this puzzle is the bee’s knees. 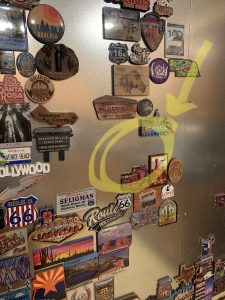 If I’m being more objective, the puzzle would be better served with the rebus squares symmetrically placed, as one of the hallmarks of the actual FOUR CORNERS is the perfect geographic symmetry of the monument.  I’m well aware of how arduous that would become from a constructor’s perspective, but when you need nits, you better start picking.

This also played fairly easy for a Thursday.  Once I got the gimmick, I breezed through it pretty quickly, and spent the last two minutes just staring at the TASSEL / HEELS / GARLIC section.  I suppose it’s a product of my MALE GAZE that my mind kept trying to make TUXES work for (Some formal attire).

Cracking: IOLANI palace is actually the only royal dwelling on U.S. soil, an absolute architectural beauty, and was wired for electric lighting in the late 19th century before even the White House.  In fact, I’d argue that POTUS should just move the whole operation to Oahu, save for the fact that it would put a pretty ugly colonial exclamation point on the history of U.S.-Hawaii relations.

Slacking: TASSEL — it slowed me down for a reason.  Graduation hats, yes.  Corn, no.

Sidetracking: FILL ME IN — paging Ryan Hecht and Brian Cimmet.  Of all the crossword podcasts out there, Fill Me In is definitely also one of those.

Overall, right up my alley.  4.5/5 for not sticking the symmetric rebus landing. 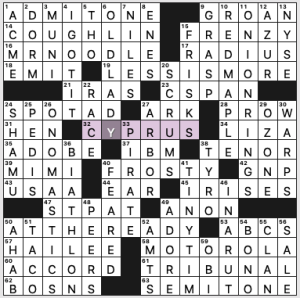 Brief recap, filling in for Jenni.

Fave fill: MR. NOODLE (also a fan of Mr. Noodle’s brother, Mr. Noodle), the **mitone buddies ADMIT ONE and SEMITONE (solely because of that 6-letter overlap), FRENZY, LESS IS MORE, ONOMASTICS (I kinda dig [The study of proper names]).

Did not know: 14a. [Giants head coach Tom who won Super Bowls XLII and XLVI], COUGHLIN. Allow me to express my disdain for Super Bowl Roman numerals. Why should anyone care if it’s the 46th championship game (or be expected to remember notable games by Roman numeral)? Just use the fling-flang years like normal sports do. The Bears won the 1985 Super Bowl—I have no idea which numeral that one was. 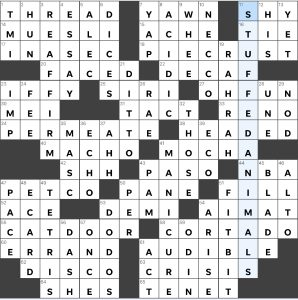 Theme: each themer consists of two entries and when the first is mixed-up (“blended”) it forms the name of a coffee drink

Just when I think I’m getting good, then a curve ball comes my way. Given the title, I really should have thought about a punny approach to it. FACED gets blended to become DECAF, MACHO gives us MOCHA, and CATDOOR creates CORTADO. That third one really tripped me up, as I got misled despite the capital “W” in the clue that was there to cautioned that it was something that a cat uses and not a part of them.

Stumpers: CATDOOR (stuck on “cheeks” or something to do with “jowls”), MUESLI (needed crossings), and AHH (initially went for “aha”)

Today was tougher to break into for me, despite an okay start, the bottom half gave me trouble with the acrosses. Nothing was clicking so I started in on the downs and made better progress and was at that point able to switch back and forth to fill it in. However, the SE corner was toughest for me, even with the down bonus fill though I completed it in the end. 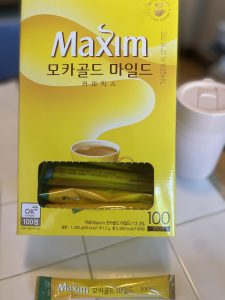 Theme: RAM (Random Access Memory) goes in each circled square as a rebus, making them a MEMORY HOLE, a digital place to forget information. 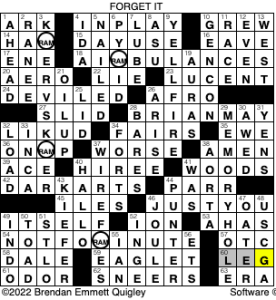 Revealer: 29a [“Place where things are put down in order to be forgotten, and a hint to this puzzle’s theme”] MEMORY HOLE

I love a good rebus puzzle, and this one was no exception. I was fit clued into it on 15a when I knew that there wasn’t a three letter word that would work. (Also: “muslims” in the clue should definitely be capitalized). ON RAMP put me right on track and I was off. I didn’t even really feel like I needed the revealer to get the rebus element, though, of course, it certainly helped in differentiating between RAM the computer storage and RAM the animal.

The stair pattern down the center of the grid was aesthetically very pleasing. I had SPELLING instead of DARK ARTS for 42a [“Witch’s skill”], which I thought was very funny, but KIEFER made it abundantly clear that I was wrong.I also enjoyed the inclusion of 26a [“Prefix with -futurism”] AFRO, 24a [“Like some spicy eggs”] DEVILED, and 46a [“‘Nobody else feels that way’”] JUST YOU.

This puzzle reminds me a lot of Tron and, specifically, the character named Ram, who – spoiler alert – dies by the end, erasing memory space from the Grid. Obviously a very nerdy reference but one, I hope, indicative of how much I enjoyed the puzzle. 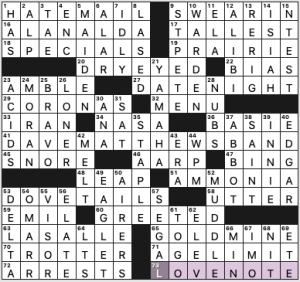 So a word ladder theme, HATE to DATE to DAVE to DOVE to LOVE. Cute, but I gotta ding it for DOVE being half a word rather than standing separate like the others. Also dinging for some fill: ALAR, ELA, RERIG, N-TEST.

Did not know: 24d. [Colonel called “the second most dangerous man in London” by Sherlock Holmes], MORAN. 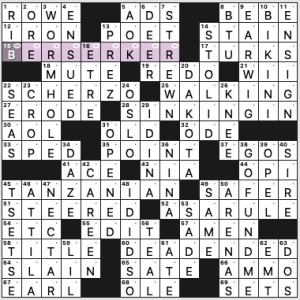 The theme is four words or phrases that follow an xAByABzAB or ABxAByABz letter pattern: BERSERKER, SINKING IN, TANZANIAN, DEAD-ENDED. Doesn’t particularly grab me as compelling—maybe if the repeated bigram was the same in all four, and certainly more elegant if DEaDEnDEd weren’t the only one that ended each trio differently rather than starting them with distinct letters.

I didn’t solve the puzzle—just auto-completed the grid so I could post something. So no star rating. Toodles!