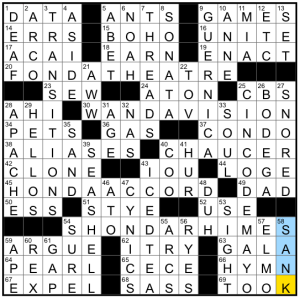 Oftentimes when I solve the Monday puzzle I jump down to the revealer in order to “get” the theme more quickly. I didn’t do that today, but I still figured out what was going on quickly and used it to my advantage for the HONDA ACCORD clue, which I never would have known. (I will say that I’ve seen this theme before in Margaret Seikel’s March 7, 2021 Atlantic puzzle, but I won’t hold that against Michael – I don’t even know if theme write-ups exist for the Atlantic since we don’t do them here, and I only remember because I liked the theme so much then).

I’m curious how the difficulty of this one is going to play – SHONDA RHIMES is well known, but if you don’t know her the revealer will fall flat. I myself needed most of the crosses to get FONDA THEATRE, especially given the “theatre” spelling. I do like that the pop culture theme references span a wide variety of subjects/eras, and given how few words rhyme with “Shonda”, there aren’t too many choices with which to create a symmetric set.

Given how the length of the theme answers forces them to be squished tightly together, I generally liked the fill today! Some bullet point notes: 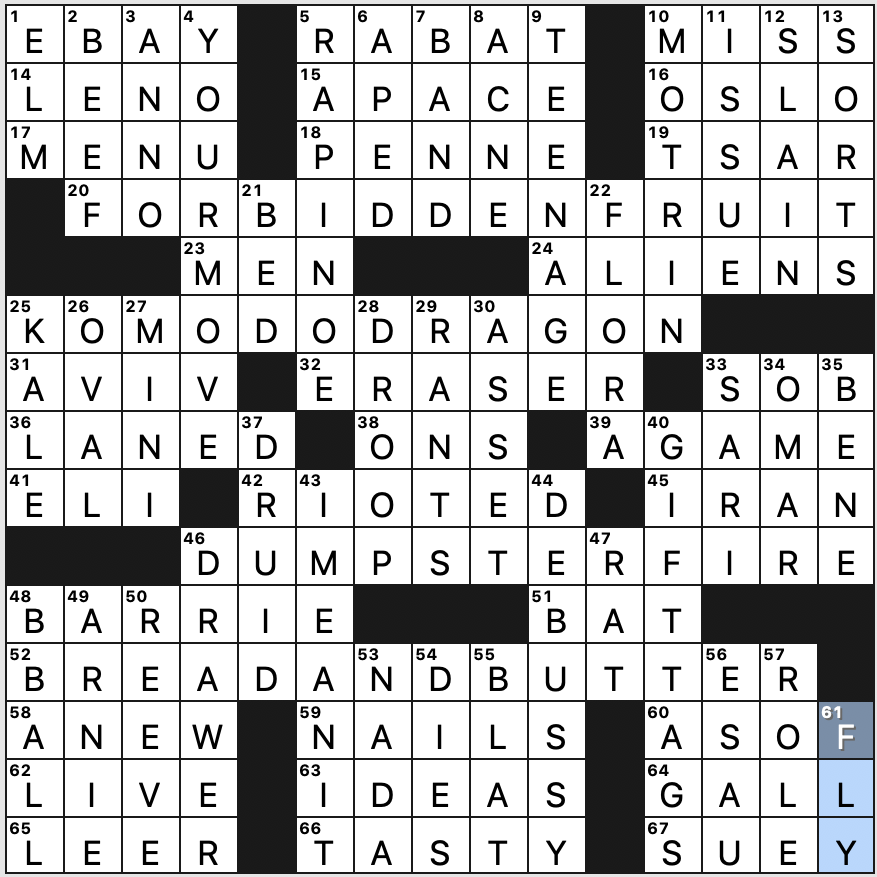 I enjoyed this solve. Both theme answers and fill were lively, and everything flowed smoothly.

That said, I wanted more from the theme. In compound themes of this type (where we find words that can precede or follow another word), we’ve come to expect that the revealer gives us some purported reason for finding those other words. For example, a revealer of PREGAME might hint that the words we’re looking for can all precede “game” in a common phrase. Similarly, POST OFFICE might indicate we’re to find words that can follow “office.” Having the keyword as an entry by itself, as we find in this puzzle, feels much less elegant.

But as I said, I really enjoyed this grid, especially lively answers like “YOUR MOVE,” “I MEAN IT!,” Megan RAPINOE, and GIFT TAGS. I did notice one potentially tough crossing for a Monday where RAPINOE crosses Moroccan capital RABAT at the R. If you don’t know either of those names, there are a lot of potential possibilities for that square.

Lovely grid, but I wanted a more solid basis to the theme. 3.25 stars. 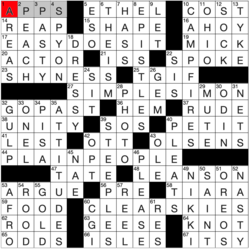 Chill out! This is an easy puzzle. No, really — no revealer necessary, each of the theme entries starts off with SIMPLE or a synonym thereof:

The themers feel legit, no green paint here, but I’m not sure I quite buy that EASY feels the same as SIMPLE, PLAIN, or CLEAR. Something can be uncomplicated without being EASY.

NIKKI Giovanni at 49D was new to me. At first I was going to gripe that that was too deep of a trivia cut for a Monday, but I think now that I’ve Googled her that I’m just showing my lack of poetry knowledge. Personally, I’d have gone with Prince’s “Darling Nikki,” but that’s a lot more NSFW than Ms. Giovanni. 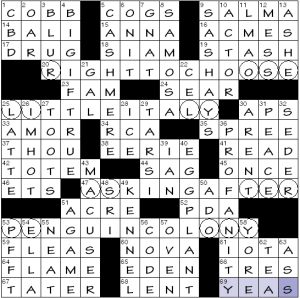 It isn’t a “wow” crossword theme, but it gets the job done.

Good morning besties, and happy debut day to Bonnie! Today’s symmetrical and swirly puzzle gives us four long entries whose “first” word is a tool (or “aid”) used by disabled people. We’ve got CHAIRPERSON, RAIL TRAIL (a new term for me made easy by the clue which indicates that it rhymes), CANE SUGAR (my favorite entry), and LIFT WEIGHTS. I have started lifting weight recently and now I am sore and tired all the time but it is cool that when I stare in the mirror and flex my arm, it looks different. 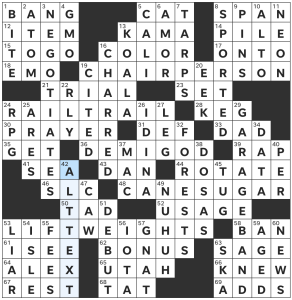 I did notice a lot of three-letter words while solving this puzzle, and indeed, there were 24 of them, which is nearly a third of the words in this puzzle. Reducing those central stairstacks to L-shapes could have dropped that to 18. I liked to see GARAGE BAND (which I actually associate with the deprecated Apple program for mixing) and DEMIGOD which reminds me of the amazing Percy Jackson books. I hope last Monday you all had some delicious CHARRED food! We had wings and spare ribs and hotdogs. (And non-charred food, like pasta salad and brownies.) 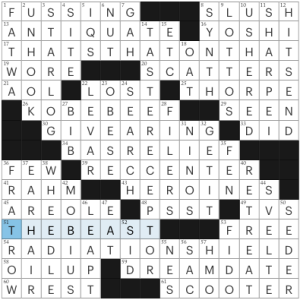 Cool-looking grid with that big eye in the center.

Four stars from me. Easier than his Saturday NYT puzzle the other day, I thought. Same true for you? 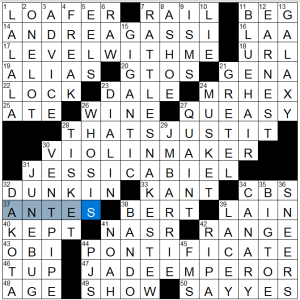 I’m not feeling well today, so this is a bit rough-and-ready. We’ve got a love stairstack design, with a 15 running top-to-bottom in RATTLESNAKE STEW [7d Hearty bowlful containing reptile meat] and colorful highlights in 90s tennis star ANDRE AGASSI, JUNEBUG, LEVEL WITH ME, and (literally colorful) JADE EMPEROR and BLUE HAIR. I struggled to complete several names today; GENA Lee Nolin, BURT Kreischer, and NOAH Schnapp, and I felt lucky to pull LAA (in reference to Major League Baseball’s Los Angeles Angels) and DUNKIN’ without needing crossings. Not a name, per se, but piecing together DAKOTA [32d Yoko Ono’s residence, with “the”] in the SW corner took a minute, particularly as I was until now unfamiliar with TUP [46a Ram], a synonym for “ram” in the farm animal sense. I was quite surprised to see RIPA clued as a partial [42a ___ loud fart] rather than TV personality Kelly — I would think that a partial like that would be less attractive than reusing a common cluing angle.
This entry was posted in Daily Puzzles and tagged Alexander Liebeskind, Bonnie Eisenman, Brendan Emmett Quigley, Brooke Husic, Emma Lawson, Kameron Austin Collins, Kelly Clark, Michael Lieberman. Bookmark the permalink.