Title: “Put a Pin in It” by Pete Muller
Prompt: The meta for this puzzle is a member of a well-known Motown group.
Answer: SPINNER

40 minutes to go and I don’t have the meta yet. I’ve gotten every step but what would appear to be the final one, but I just haven’t been able to crack it. So my last-ditch effort is to blog it and see what happens… 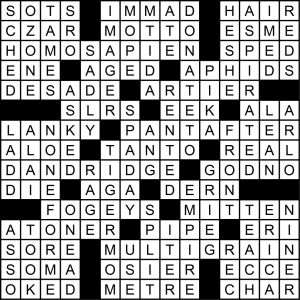 Title is “Put a Pin in It” and I noticed right away that 1-A/1-D can turn from SOTS/SCHED to PINOTS/PINCHED if you “Put a Pin in” that square. Symmetrically at the bottom-right square we have the same idea: CHAR/NINER can become CHAPIN/NINEPIN. A few minutes later I noticed the enter square could get the same treatment, with TANTO/ANG becoming TAP INTO and APING.

I then noticed that each of these new words could satisfy another clue in the grid:

Much later on I noticed there were two more!:

So I can’t form anything from those letters, which are HIRAALSTSU in grid order, or RTILUAHSAS in clue order. But I did noticed that the five letters we’ve replaced in the grid spell SANER, which becomes SPINNER if you pit a PIN in it at the A, referring of course to the Motown group the Spinners.

So is SPINNER the meta answer, or do we need a specific one of the Spinners? There are over a dozen past and present members (see list here) but I don’t see a reason to choose one. We have the 10 letters above extracted from the grid left unused if just SPINNER is the answer, but the only two Spinners with 10-letter names are Ronnie Moss and Bobby Smith but I don’t see how to get to either of those names from HIRAALSTSU.

So I’m going to go with SPINNER as my final answer. I had guessed from the title and prompt that the Spinners might have something to do with the answer because of the embedded pin, so maybe that early guess was right all along. I hope? If not my streak is kaput! I shall find out at 11:00ish…

Just now after submitting I’m seeing there was an easier version! Ack! Shoulda read the instructions!!

UPDATE: SPINNER it is! The streak lives!