Parents and chasers of personal best times, get ready – this is your puzzle! 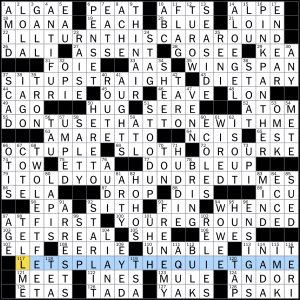 In my mind, this is what makes for a lovely Sunday puzzle – a fun theme, modern fill, and a smooth solve overall! Even when there were some tricky or less common entries, the crossings felt gettable. I’m guessing there’ll be many PRs or super quick solve times. Heck, this puzzle only took me 11 minutes to solve while simultaneously chasing my dog around our backyard. Congrats to the constructor on a fun puzzle! Even with just six themers, you can really have a puzzle that shines – YOU’RE GROUNDED was very much my favorite themer.

Quick write-up today because of evening plans, but I’m glad I got to share in the joy of solving this puzzle with y’all. Can you think of any other phrases parents say all the time that could be repurposed for a theme like this? If so, let us know in the comments. Otherwise, have a lovely upcoming week! 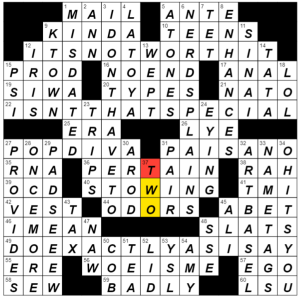 Whew! This puzzle was sooo fun. It’s technically themeless, but does it ever have a vibe. First off, the grid just looks so gosh darn HAPPY! The above mentioned long entries are smart and sassy and this puzzle does whatever it wants. I very much appreciate the gender representation with SIWA (19A [Singer and dancer Jojo]), POPDIVA (27A [Mariah Carey or Lady Gaga, e.g.]), ANN (2D [Poet Carol ___ Duffy]), LAYTOYA (4D [“If You Feel the Funk” singer Jackson]), ALI (45D [Boxer Laila]), AMY (54D [Florence’s “Little Women” role].

There’s a thoughtful creativity given to cluing entries which might otherwise be seen as negatives, namely OCD (39A [Condition that might be treated with Exposure and Response Prevention] and WEPT (13D [Reacted to a Pixar short, probably]). (Does anyone else get weepy just *thinking* about “Lava“???) What a fun clue for KTOWN (9D [L.A. neighborhood where a lot of Seoul food is found?]) and it even has my favorite Thai restaurant choice: PADSEEEW (29D [Stir-fried noodle dish containing Chinese broccoli and egg])! And I don’t think I’ve ever seen a puzzle from Amanda that didn’t include at least one theater reference: TWO (37D [Number of acts in “Sweeney Todd”]). 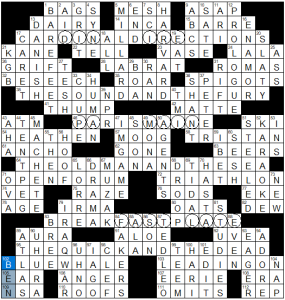 Right from the jump, with circles in some long acrosses and none in others, we know something is up in this mirror symmetry 20×21 grid.

The theme is easily apparent. There’s three pairs of entries following the same pattern: a common phrase containing two hidden words in circles in the first entry, and then a second entry in the format “The X and the Y,” with X and Y being synonyms for the circled hidden words in the immediately previous themer.

I found the theme progressively more difficult from top to bottom, which I enjoyed, given how easy the mechanism was to identify on the first pairing. DIN and IRE to SOUND and FURY are quite straightforward, but even knowing the theme in time for the next pairing, PA and MAIN are a bit less direct to OLD MAN and SEA. And then I’m unfamiliar with THE QUICK AND THE DEAD, so even more resistance in the last theme pair. Not sure if that last bit is by design from Evan or specific to this solver, but a fun effect nonetheless.

The shorter PARIS, MAINE allows for some decently open areas in the upper corners and middle edges, as compared to the spots where the second and third, and fifth and sixth, themers are only separated by one row. TENT PEG [44d Spike in a forest] and PROLOGUE [12d Opening statement?] in particular were colorful entries with nice a-ha moments from the clues for me.

Our theme consists of familiar phrases that hide anagrams of various forms of marital arts.

As usual, ignore the parenthetical square-counting tips if your grid has circles. 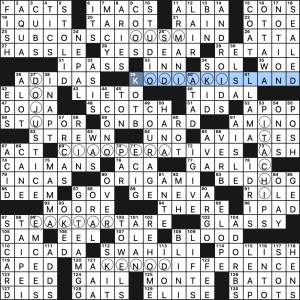 I solved this as a themeless because I didn’t think sorting out the anagrams during the solve would actually help me. But it’s a nice theme set with some surprising finds. I also learned that sumo and tai chi are considered martial arts. (Now that I think about it, why wouldn’t they be? Maybe because no one ever made an action movie where the protagonist practiced sumo or tai chi. Maybe someone should.)

There isn’t a lot of long fill aside from ANDROIDS and “GO TEAM GO!” (I had to work for that second GO), which are both nice. But the mid-length stuff has some gems, too: ORIGAMI, “YES, DEAR,” ON BOARD, CAIMANS, BED HOG, SWAHILI, and CICADA.

I ignored the theme during the solve, but it’s a nicely-constructed grid. 3.75 stars.

Oh, and I never figured out that last anagram. Let’s look it up…Oy, no wonder I couldn’t get it. I’ve never heard of Capoeira. Wikipedia says it’s “a Brazilian art form that combines elements of martial arts, dance, acrobatics, music and spirituality.”

I’m covering today and very happy to do so! Clever theme with a fun grid filled with tons of bonus fill—what’s not to love? 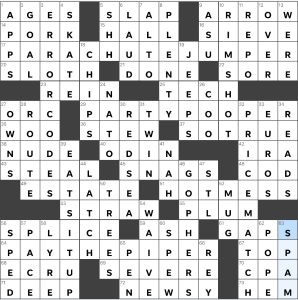 Theme: the word “paper” is split (or cut) in each themer, each beginning with PA… and ending with …PER

Given the title today, I was looking for “paper” and considered a wraparound so between that hint and the cluing, PARACHUTEJUMPER plummeted into place and landed safely. PARTYPOOPER was the same, making me laugh as I typed it in. However, PAYTHEPIPER took me a bit longer, as I wanted to end the phrase with “price” but that wouldn’t fit the pattern so I relied on the crossings. Interestingly, as the pattern emerged, I wondered if the “cut” would be in different places but it remained the same throughout, which is probably the more impressive feat. Part of me wanted a fourth, just since they were so fun!

Stumpers: SPEW (first tried “spit”), ERRORCODES (I always think of them as “messages” or “sites” so the second half tripped me up for a bit), and SLAP (needed crossings, as the cluing just didn’t do it for me)

Flipped between acrosses and downs to, as the first few acrosses were tougher for me and needed crossings to get a foothold but then the grid started filling in fairly quickly and I just adored all of the lengthy bonus fill and great design that allowed for it all, in addition to the fun theme and themer set. Excellent puzzle with just the right mix of challenge and delight!