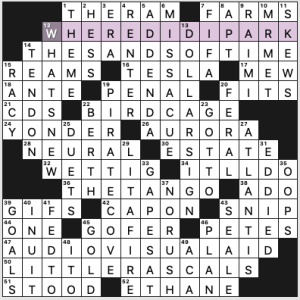 What a pretty grid, sashaying right and left. Almost looks like some sort of curvy racetrack.

Easier than I was expecting, but harder than Friday.

Fave fill: “WHERE DID I PARK?” might be questionable as crossword fill, but it sure is relatable! THE SANDS OF TIME, a beautiful AURORA (the photo below was taken by a Pokémon Go friend up in St. Albert, Alberta. This might be a picture taken from her bedroom window!), LITTLE RASCALS (how does that hold up now? I’m guessing it’s pretty appalling), “WHAT’S NEW?”, DOLLAR SIGN, and ATLANTIS. 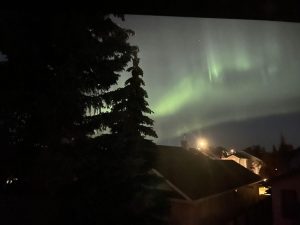 Rambling notes from my solve: Not keen on 1a. [Sign of spring] for THE RAM—that is a symbol of the sign Aries, no? And of course, the 6-letter spring zodiac sign starting with T is TAURUS.

This is the Pokémon Go edition of Crossword Fiend, apparently. Because 7a. [Performs repetitive tasks to gain experience points, in gaming slang], FARMS—that’s also a thing in the game. Evolving a bunch of creatures with a low cost for evolution is, e.g., Pidgey farming. I appreciate it helping me with crosswords! (P.S. 17a MEW isn’t just a [Litter whimper], it’s also a Pokémon name!) 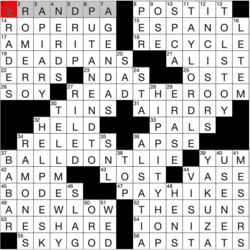 This puzzle had a little more bite to it than the usual Saturday, which is a good thing. A few notes: 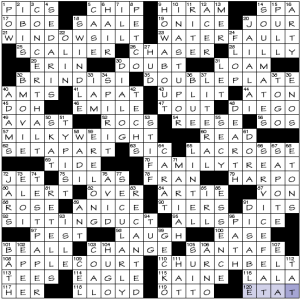 Had misapprehensions during the first few theme answers I encountered:

And at this point I thought we were still doing that, but altering the spelling if necessary. Checked the title, but couldn’t really make sense of it.

After seeing a few more themers I understood that what we were in fact doing was suffixing just a -T to the phrases and adjusting the spelling.

So there are is a lot of theme material, but it isn’t too exciting. They can’t all be winners, you know. 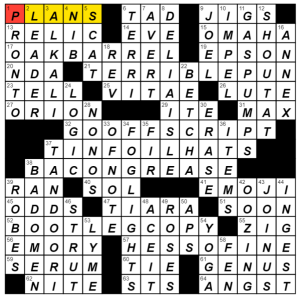 While Guilherme’s grid is solid, clean, and well-built with a nice center stairstack, the highlights of this solving experience are found in the clues. With specific references for entries like TIARA (47 [Papal ___ (image on the Vatican flag)]), NDA (20A [Doc often signed by reality show participants]), LOGIC (24D [Sudoku solver’s skill]), and those listed above, I would have liked to see a similar style of clue for BACONGREASE (maybe something about breakfast gravy or cornbread or roasted potatoes, yum). This puzzle was a little harder than the average Universal themeless for me, but all in all still a fun solve. Thank you Guilherme! 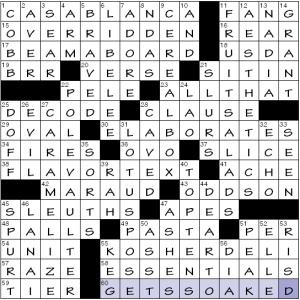 Wow. At no point did I feel like I was making significant progress with this crossword. Continually I was abandoning paltrily filled sections in search of more fertile pastures, and continually I was stymied. And yet, in under fifteen minutes, it was done. I have no idea how that happened.

How did this one treat you? 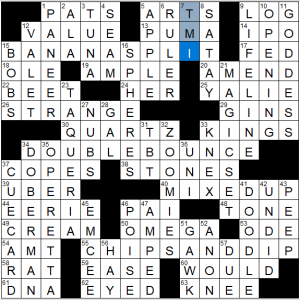 Our themers end with words that suggest “leaving,” thus the title “Last to Leave”:

I smiled all over the place moving through the fill today. I know PAI gow as a domino game, but I see there’s a card game of a similar name. Solved this puzzle hungry, and PANEER, TUNA, SATAY, BANANA SPLIT, CHIPS AND DIP, TACQUERIA all have me thinking about dinner this evening. And, you know, who doesn’t love a good case of the ZOOMIES? [32d Pet’s burst of energy].