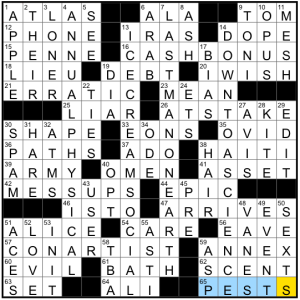 So, the theme answers go down, and each of their last words is a SCIENCE: physical science, earth science, social science. I like it! And the revealer is perfect and a great a-ha moment. LAST MAN ON EARTH and ICE CREAM SOCIAL are both fun evocative answers as well. ANNUAL PHYSICAL wasn’t as exciting, and I wondered if a different science could have worked in that slot. Maybe something ending with “life” or “food” or “computer”? (OK, I’ll admit I have some bias towards that last one :) ) Side note that it’s interesting to me that the idioms “down to a science” and “down to an art” pretty much mean the same thing, despite science and art themselves being very different.

I won’t complain much about the choice of theme answers, though, because this grid seems like it would have been incredibly tough to put together. Because DOWN TO A SCIENCE is 14 letters long, it can’t go in the next column to the right without creating a two letter word (check it out for yourself and see!). That placement means that all 4 theme answers are crammed into the middle of the puzzle, which makes filling it cleanly difficult, but I thought Leslie and Andrea did a great job. I mean, the two longest across answers, CASH BONUS and CON ARTIST (both great answers in their own right) cross three out of four theme answers! The middle of the puzzle did feel a bit choppy with a bunch of short answers, but for the aforementioned reasons I understood why it had to be that way.

I only had a few major MESS UPS in the puzzle – most of my slowness came from me typing in the wrong letters. I thought 29d [One way to reduce one’s sentence?] might be “plea” but it was EDIT, and I completely forgot where Hispaniola was for a hot second when I was trying to answer 38a [About one-third of Hispaniola, area-wise] – it’s HAITI. My favorite clue in the puzzle was also for the last answer I filled in: 25a [Make-up specialist?] for LIAR.

Piratey ARs are added to the beginnings of familiar phrases to wacky effect. 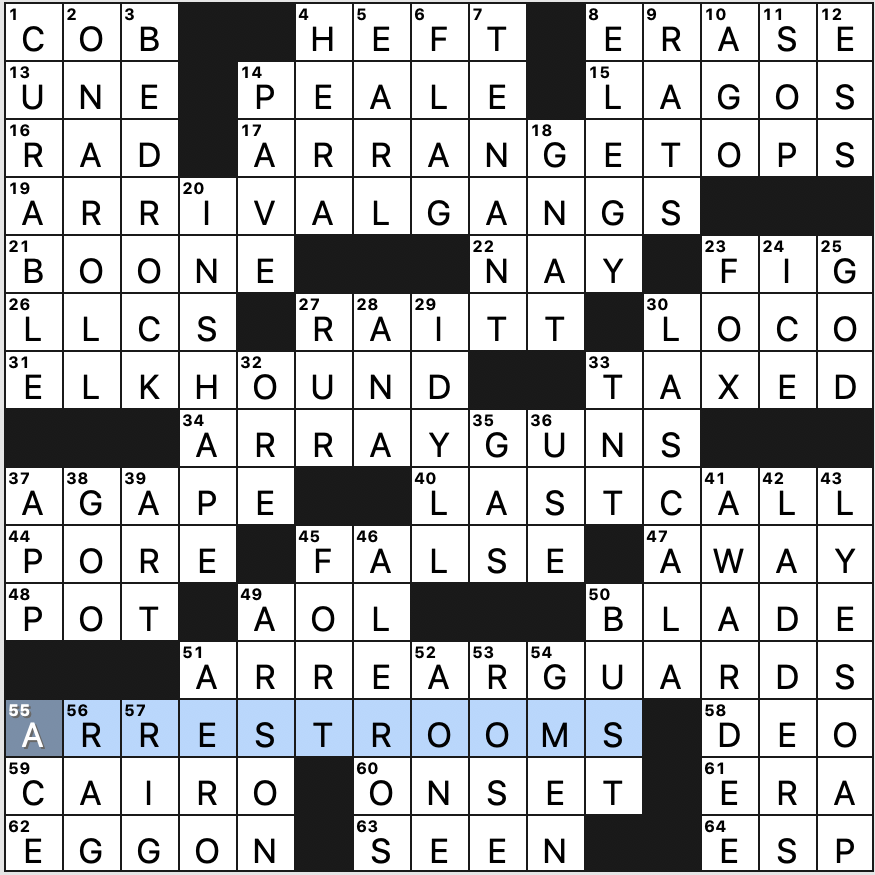 Well, it is Talk Like a Pirate Day, so this is timely. Can’t say I chuckled at any of these, but it’s consistent and well executed. I was surprised to see two pairs of theme entries stacked without too much gluey fill bringing things down.

Top fill: ELKHOUND, LAST CALL (with a near echo in crossing entry LA SCALA), BEDROCK, IN SHAPE. Is it about time we retire R.U.R. [1921 robot drama] from our crossword databases? 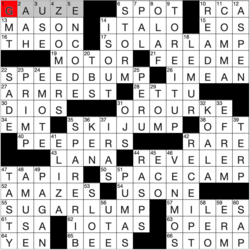 I have just enough time to explain the theme on this one, not much else. The revealer at 66A [Walk heavily, or a three-word hint to the answers to the starred clues] is STOMP, or “walk heavily.” Break that into three words — S TO MP — and it describes the theme answers, which all start with an S and end with, or go “to,” MP:

Interesting that the themers are so short, yet with the exception of SKI JUMP they’re the longest entries in the puzzle. Even though there’s no entry in this puzzle longer than 9 letters, it didn’t feel full of cliched short words. I liked seeing OLAF clued with reference to the German PM rather than to the usual snowman from Frozen. 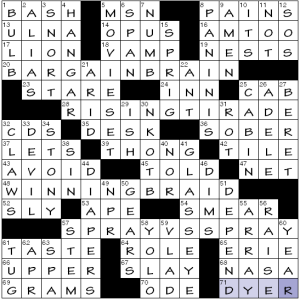 Almost certainly the theme was derived from the title here: “RA’s put in” (or possibly “RAs (plural) put in”). I wonder if an earlier attempt was to insert the trigram RAS rather than the bigram RA.

These clue/answer combinations are all quite good and entertaining. Yes, it’s quite silly and contrived, but they work well.

The cluing is pitched very easy, so this is a good crossword for neophytes, despite the fact that there is no revealer and the title is a bit cryptic. I’ve never been certain whether the Universal adheres to a schedule of gradually increasing the difficulty of their puzzles as the week progresses, but this certainly seems Monday-simple. 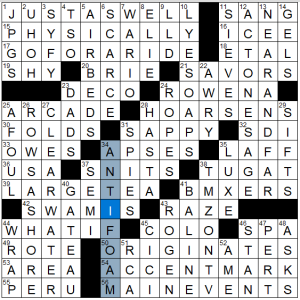 BEQ refers to this grid as a “Sort of a ‘classic'” shape today, and I have to agree. I’ve said it before that I love these themeless grids where there’s some open space in each corner, rather than two corners with stacks and two thta are relatively smaller.

Today, I found the NE and the middle far more straightforward than the rest. It’s been a bit since I’ve worked through a puzzle with such a difficulty gradient within the same grid.

Some rapid-fire thoughts today: Are LYE SOAPS [10d] “artisinal” themselves, or used in cleaning artisanal things? I would imagine the former. Generally, I enjoyed the fill here, but wonder if LARGE TEA is green-painty–certainly [39a Drink order in a to-go cup] isn’t much of a specific clue. I’m done with Harry Potter things in puzzles (ROWENA today), given the doubled-down hate and intolerance coming from author.

My slow area in the south? TMZONTV, BALINE, ROGEN, CICI all next to each other is tough, though some of those I feel I should know a little more quickly than others. I’m not sure [50a Starts from] quite works for ORIGINATES. Simply [Starts] would be more comfortable for my brain. Know what? Throw RCA, AME, and STAN Kroenke in there from that section too. The first is inferrable enough I guess, the second less so, and STAN Kroenke is a bit of a sports deep cut – he owns a lot of things, but you’re not going to see his name as much as players on his teams. 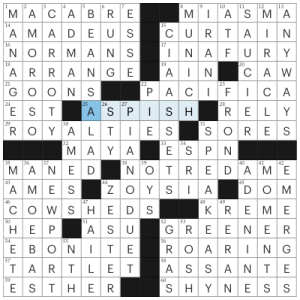 The clues weren’t as tricky as I expected for a Monday New Yorker, so despite all the uncommon fill, it fell in a Fri NYT amount of time. Your mileage may vary if entries like IN A FURY, AIN, ESSE, IRANI (this does not mean IRANIAN! And the actual meaning is not at all well-known to Americans. Constructors, please remove this from your word list if you’re going to pretend it’s the same as Iranian) ASPISH, ZOYSIA grass, COWSHEDS, EBONITE, and CARROTY threw you a curveball. 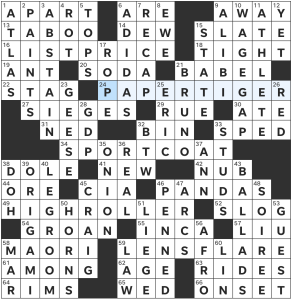 Today we have a puzzle with five theme answers in a symmetrical grid. The “first” word of each answer can be preceded by the word “contact”– we’ve got LIST PRICE, PAPER TIGER, SPORT COAT, HIGH ROLLER, and LENS FLARE. My favorite entry was the last one, but PAPER TIGER reminds me of one of my favorite short stories, The Paper Menagerie. If you haven’t read it– go read it. It’ll take you like fifteen minutes. Also, please leave short story recs in the comments; they’re my fave bc I can finish them on the train.

When the central answer is nine letters, that makes it very tough for a constructor to include long down answers. Instead, we get some seven-letter stuff like ORIGAMI, BALLADS, and WAGE GAP. Shout-out to the clue for ATE which will have me thinking wistfully of baozi until I can have some… maybe for dinner tomorrow night.