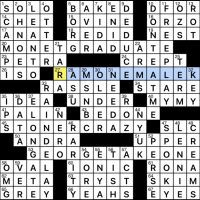 Hello, everyone! This week’s Jonesin’ celebrates 1111 puzzles with a fun 1/I/one theme. Each of the theme entries replaces the letter I, which looks like the Arabic 1 or the Roman numeral I, with the written-out ONE. 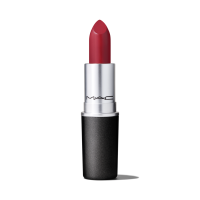 That’s all for now. Until next week!

Theme: Apple devices are found backwards in familiar phrases. The revealer is APPLE TURNOVERS (47a, [Fruity desserts, and a hint to the circled words]). 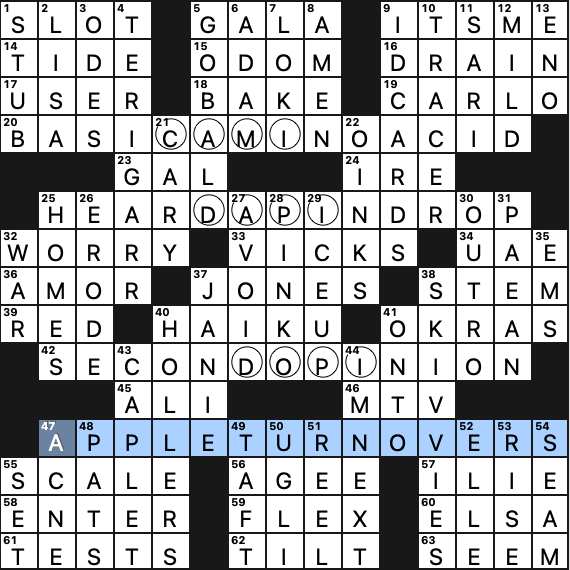 I needed the revealer for the aha moment. After the first entry I was looking for undergarments (like a Cami). After the third one, I was wondering (1) if this was some sort of weird word ladder or (2) if these were some whacked-out Dwarfs (Cami, Dapi, and Dopi). Thankfully, the revealer gave me what I needed. Enjoyable theme.

14- and 13-letter theme entries are a challenge to work with, but having only four of them gives the constructor some much-needed breathing room. So we’re still able to get fun entries like fully-named TERI GARR, HOLLERS, ID CARDS, and especially the lovely SKIVVIES…plus, “I’M NEXT” and GO BALD as well. 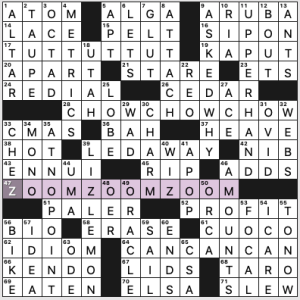 You can say that again! A reduplicative phrase (one that repeats it words) goes one further with a distinct meaning for the single version:

I do fret that newer solvers may have encountered some surprisingly tough stuff in this puzzle, such as singular ALGA and the multi-word answers SIP ON, I CARE, and TO NOW. 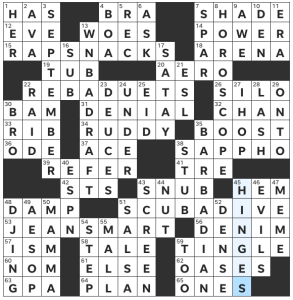 This was the first USA Today puzzle where I couldn’t parse the title. I couldn’t even figure out where the word breaks were- was it “double plu sun good”? “double plu sung ood”? After I solved the puzzle, I googled the title: it’s Newspeak from Orwell’s 1984, and it means very very bad. Not an auspicious title to give your puzzle, but luckily the result could not have been more different.

I loved the theme answers that the constructors chose today! Congrats to the Las Vegas ACEs on winning the WNBA championship yesterday – I’ll almost forgive you for knocking out the Seattle Storm on the way there. I had never heard of REBA DUETS but the clue made it easy to puzzle out. Less easy for me was the spelling of BARBADIAN: I had the I as an O for most of the solve. The diagonally symmetric grid is very aesthetically pleasing although it did feel a bit choppy as I worked through it – there are almost 30 3 letter answers, and that many starts to feel like a lot to a solver.

Clue highlights:  47d [Surprised Pikachu, for example] – MEME, 27d [Breakfast chain with a Minions collaboration] – IHOP, 30d [Hiro, to Tadashi Hamada, for short] – BRO (a “Big Hero 6” reference, for those not in the know). 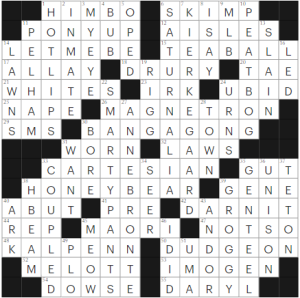 No vocals on this, strangely I would think, for an Yma Sumac recording, so it just sounds like a typical exotica recording of the period:

I didn’t understand the theme until I started writing a blog post about how it doesn’t work. It works. Let’s take a look.

Each theme answer has a word circled in the middle. 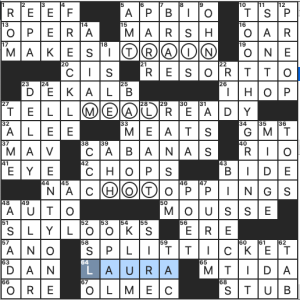 And the revealer at 58a [Voter’s crossover ballot, and what can literally be found in the circled letters] is SPLIT TICKET. TRAIN TICKET, MEAL TICKET, HOT TICKET. That makes sense. I didn’t understand the SPLIT until I looked at what I just typed and realized that each type of ticket is SPLIT over two words. Aha, as they say! That’s a nice solid theme in an appropriately accessible Tuesday puzzle.

It’s been a long day so I’ll skip to “what I didn’t know before I did this puzzle.” I didn’t know that LAURA Linney was in “Ozark.” 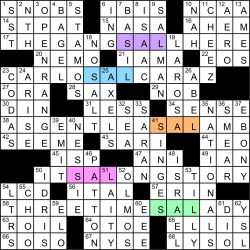 Good day, everyone! Hope you all are doing well on these final couple of days of summer!

Each of the theme answers in today’s puzzle has a man in the middle! That is, the name “SAL” is hidden in all of those entries, spanning multiple words in the theme entries.

Though probably not intended, we also have a “SAL” appearance with SALMAN intersecting one of the theme entries (9D: [“Midnight’s Children” author Rushdie]). I’m now losing track of all of the movies and TV shows that IDRIS has been on the past few years, and only knew pretty recently that he was in Thor (50D: [“Thor” actor Elba]). OPEN RANGE (3D: [Extended area where cattle roam freely]) was nice fill, while seeing NATIONALS reminded me that, not too long ago, the team that is well on its way to a 100-loss season in 2022 was a World Series champion just three years ago (35D: [Washington team that won the 2019 World Series]). Oh, and about the song mentioned in the clue for ISAAC to give you a wonderful earworm as you go about your day (8D: [Hayes who sang “Walk On By”])?! Let’s go!

“Sports will make you smarter” moment of the day: BAGEL (4D: [Food described a “a doughnut with the sin removed”]) – The term “bagel” has picked up in popularity in the tennis world, as that’s the nickname for a set in which a player wins by a score of 6-0. The reason it’s been in the news in the tennis world regularly is because of the No. 1 player in the world, Iga Swiatek, who has recorded 19 bagel sets this season during her dominant season, one in which she amassed a 37-match winning streak. For more on the Polish powerhouse who just won the US Open alongside Carlitos, read this feature here. I hear the person who wrote it is a funny guy!