Theme answers consist of two-word financial terms where the final word is also a body of water. 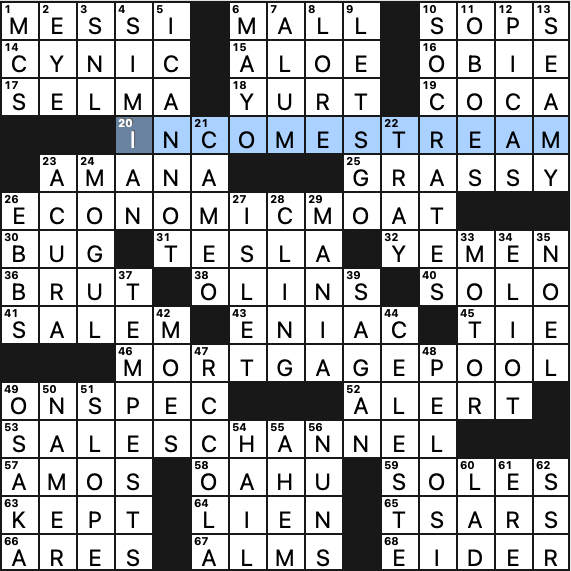 What better venue for this puzzle than the Wall Street Journal? That said, I’ve only ever heard of one of these phrases (the first one), so I personally didn’t get a lot of joy from it. But I can appreciate the tightness of the theme. I just don’t know how many solvers know these phrases.

I like the pairing of SOCRATES and TEMPESTS as well as the formal “I CANNOT,” CELESTE, and “LET’S GO.” I wasn’t too keen on the crosswordese sprinkled throughout like ENIAC, SSR, plural OLINS, and weird NAMER [New parent, e.g.]. It took just a few minutes for me to replace that entry with NAVES and SLOPE with SLINK to get crossings AVIS, KENT, and ASKS. Similarly, the SE corner could be cleaned up to remove SSR. 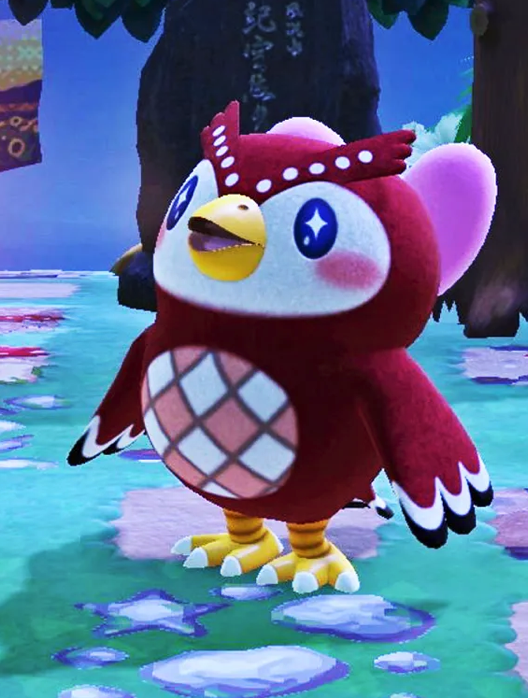 Overall, I didn’t feel like I was in the target audience for this grid though I appreciate its consistency. There are some nice bits of fill, but other areas could’ve used some tidying up. 3.25 stars. 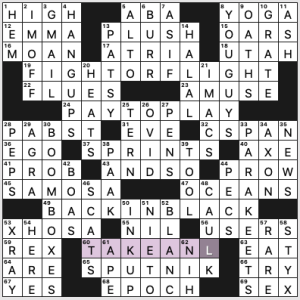 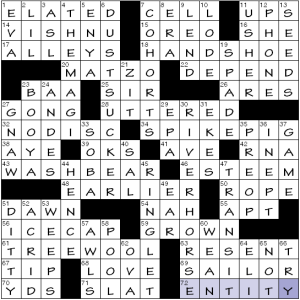 This was a fun theme for me, as I’ve studied German a little bit, ein Bisschen. It’s somewhat strange that three of the six theme entries are animals, mammals more specifically: Säugetiere—suck-animals.

I wonder if this puzzle’s theme will be polarizing. 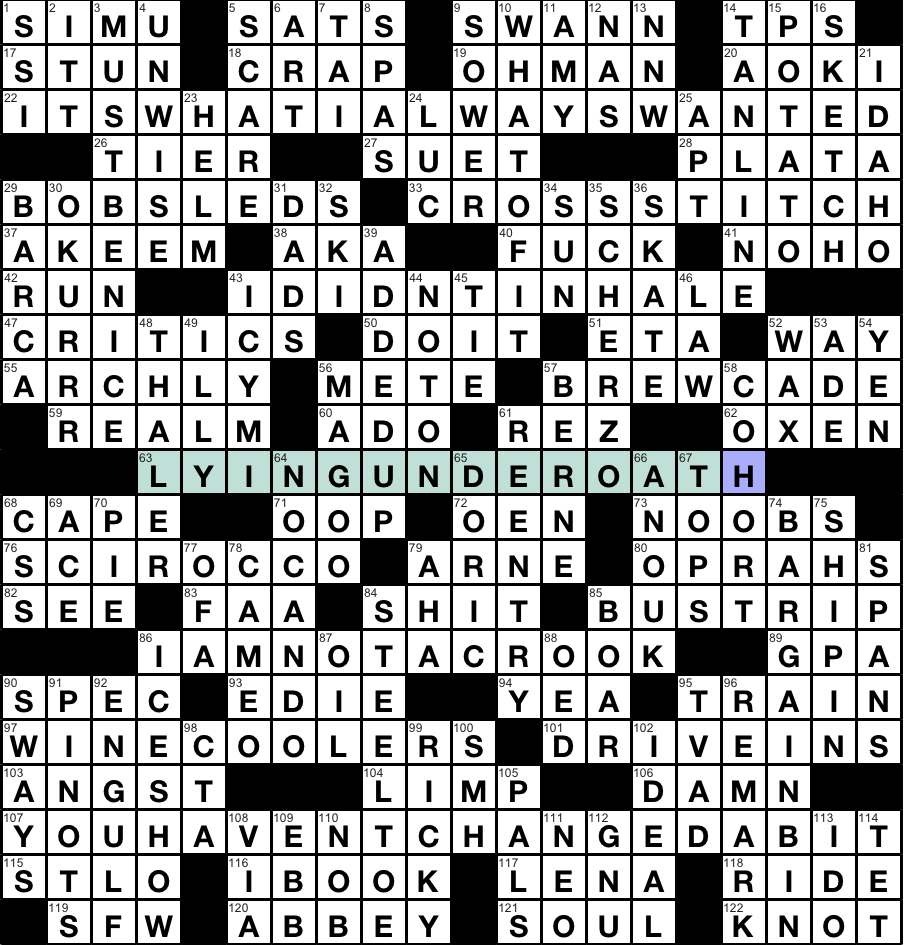 This week’s AVCX Classic from Aimee Lucido, was a very entertaining 3/5 difficulty.

When I saw the title “Swear Words,” I was wondering what we’d be in for – and this puzzle didn’t disappoint. We have four well known lies in the puzzle, each with a swear word above it, with the perfect revealer LYING UNDER OATH.

The fill of this puzzle kept me engaged throughout as well – here are some favorites: 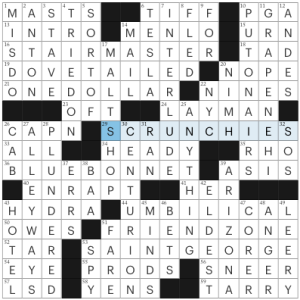 51a. [Metaphorical place often invoked by men with “nice guy syndrome”], FRIEND ZONE. Memo to “nice guys”: No woman owes you her attentions or affections. Work on your personality and interests instead of complaining that you always get friend-zoned.

Quick puzzle; fell faster than I expected it to, though a look at the blog archives would probably show sub-4:00 times are my norm for Wed TNYs. 3.75 stars from me. 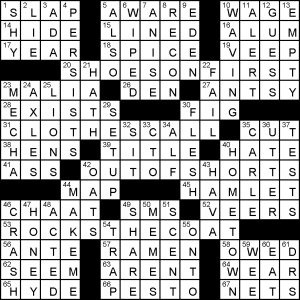 I’m not sure this theme is cohesive enough for crosswords: three of four answers involving forcing a clothes word into an unrelated phrase, and one is the word CLOTHES. The first three involve adding a sound to create the clothes word, the last changes COAT to BOAT which involves a consonant change…

Two answers I had no clue about, but emerged through crossers: [Food cart snacks in South Asia], CHAAT, [Corp. computer exec], CTO. I can also see [Anime genre featuring giant robots], MECHA being unfamiliar to some, but the connection to mechanical should make it work-outable…

Editor:  Erik Agard
Theme: The central answers’ clues are “BA” “DE” “YA”, which is a lyric in Earth, Wind, and Fire’s song “September”. 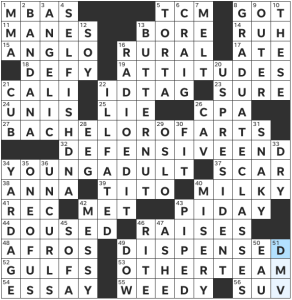 Well, if anyone is going to remember the 21st night of September, it’s me because today’s my birthday! Despite knowing exactly what the title referred to as soon as I opened the puzzle, I didn’t see its connection to the theme until after I finished and looked up the lyrics to September. I always thought they were just saying “ah” as opposed to “ba de ya”, so I’ve learned something new today. The abbreviations are all totally common and legit, and I like the slightly outside of the box theme.

Very low word count grid today by USA Today standards – by my count only 70 words. That means that on top of the (stacked!) theme answers, we get a whole ton of interesting longer fill that was still clued in a friendly enough manner that it’s easily gettable for a newer solver. Favorites for me were SELFISH DNA, RADIO EDIT, GRADUATE CLASSES and the clue 20d [Louis Armstrong reportedly used one to smuggle weed through customs] for US PRESIDENT (the president was Richard Nixon, and apparently the bag Louis asked him to carry contained 3 lbs. of weed. Iconic behavior.)