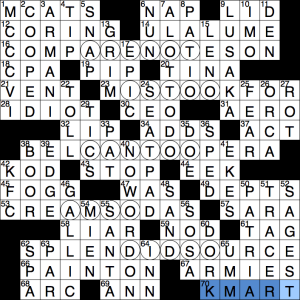 hello and welcome to episode #746 of matt gaffney’s weekly crossword contest, “Our Retorter Is on the Scene”. for this week 3 puzzle, matt challenges us to find a five-letter word. what are the theme answers? first, there are the five long answers, which each get a parenthetical number in the clue:

the next step is strongly suggested by the title: each of these themers contains a “playground retort” of the type commonly clued in crosswords simply as {Playground retort}: ARE NOT, IS TOO, CAN TOO, AM SO, and DID SO. but what now?

well, there are five more themers, each with a weird playground-y taunt for a clue. these could each be ingeniously riposted by one of the hidden playground retorts. in order of the parenthetical numbers:

taking the first letters of the extra themers in (1)-(5) order spells out SLIDE, a fixture on the playground where all this witty repartee is presumably taking place.

this was pretty straightforward as week 3 metas go, but i suppose week 3 of 5 is meant to be easier than a typical week 3 of 4. i enjoyed the repurposing of the somewhat tiresome “playground retort” crosswordese in the service of a meta mechanism. BEL CANTO OPERA in particular is a great find (and i wonder if noticing CAN TOO in there was the seed of this meta); SPLENDID SOURCE somewhat less so, but there can’t be all that many DID SO options.

the grid was … well, it was okay. a lot of the space was taken up with the theme, and in particular the bookending 14s necessitated big chunks of black squares in the corners. the two nonthematic 8s A LOT TO DO and NO WORD ON both felt rather ungainly, but those (along with SEAT PAD) each crossed three themers (more if you count STOP and LIAR as themers), so were understandably constrained.