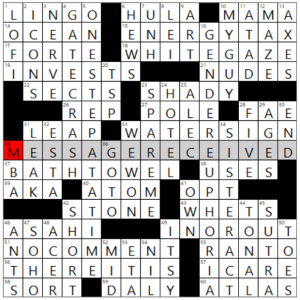 Had the timer off but it felt maybe harder than the typical Fri NYT? Erik’s a master of tricky cluing, so it wouldn’t be unexpected.

I enjoyed this puzzle! I figured out the theme early on and it was fun to solve, and then the revealer added a layer of pleasure. Nice all around!

We have rebuses. Rebi? 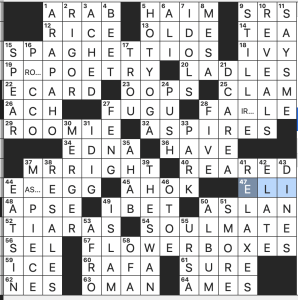 The revealer at 57a made me smile. [Decorative planters…or a description of three squares in this puzzle] are FLOWER BOXES. This is my idea of a good rebus theme. The rebuses are all different, so I have to figure them out. They’re not symmetrical; I like the challenge of that. All the crossings use the rebus word in solid, in-the-language entries.

I always enjoy and appreciate the Inkubator vibe. What other puzzle would have a preppy sweater as a theme entry? Plus we’ve got Harryette Mullens, Maya Angelou, a Taylor Swift song, a reference to the Pink Tax, and Girl Scouts. I probably missed some. Wow, what a difference it makes in my solving experience.

What I didn’t know before I did this puzzle: SO MANY THINGS. Never heard of the Sandy Tolan book referenced in 1a, which sounds fascinating. Did not know that HAIM was somehow connected with “The Wire.” Had never heard of Harryette Mullens, ELI Clare, or “Hani and Ishu’s Guide to Fake Dating.” A good puzzle and a bunch of additions to my reading list! Bonus. 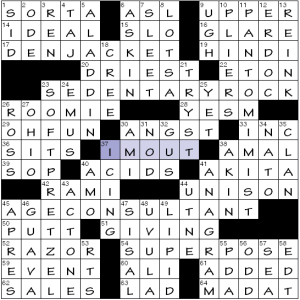 The central revealer certainly helped, and hastened my solve.

These are all right, but I’ll call partial foul on the last, since superpose is a word, one of whose senses is the same as superimpose. My main association with superpositioning is with four-dimensional hypercubes—tesseracts.

Another minor ding is the IM appearing prominently in the non-theme long entry 11d [Specialist in body language?] PANTOMIMIST—that it has a playful question-mark clue exacerbates the idea that it might be theme-related.

Our theme consists of famous people whose initials are also common initialisms, but as used in the clue, the initials don’t stand for what they normally stand for (hence the title). Got it? 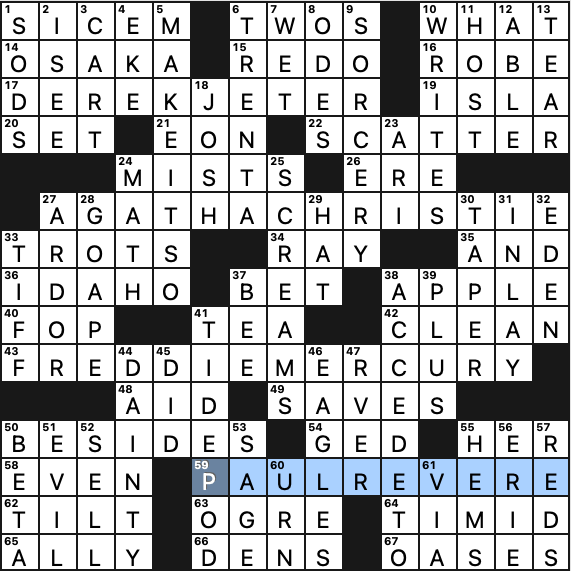 I thought this was a nifty theme. Lots of wordplay going on, especially in the first two entries, mainly because the clues as written could be applied to their original respective entities. (That is, one could say “This disc jockey likes big hits,” or “This air conditioner gives me a chill”.)

The other two don’t work that way, unfortunately. One wouldn’t say “This F.M.” or “This P.R.” when referring to an FM station or a PR campaign.

Despite that, I had no problem granting the theme a little leeway, and I still enjoyed it since it felt fresh. For fun, I tried to find some others. How about “This SO stands by her man,” (Sharon Osbourne) or “This MD knows how to get your blood pumping,” (Miles Davis)? Can you add some more?

In the fill I loved the nerdy “MAKE IT SO” [“Carry out your orders,” to Captain Picard]. Other goodies: SORCERY, TIDE POD, and DAINTY. The rest of the fill seems exceptionally clean, and with fun, fresh clues throughout, the solve proceeded smoothly.

Not much else to say other than this was an enjoyable puzzle despite my nits. Four stars.

Theme: Each theme answer starts with a homophone of BYE. 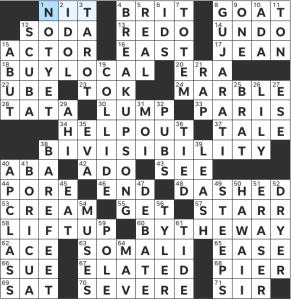 This theme was easy to parse, though in my morning haze, I started to fill in SHOP LOCAL instead of BUY LOCAL at first. I love love love BI VISIBILITY in the center of this grid, and obviously, it’s super apt for today.

This grid is asymmetric, and I enjoyed how this resulted in some fun corners. I didn’t catch 4d at first, trying to fill in BREAK OUT SONG, but 34a literally HELPed OUT. I knew GUJARATI but couldn’t remember how to spell it, so that R in MARBLE was crucial.

That’s all from me today! TA-TA!