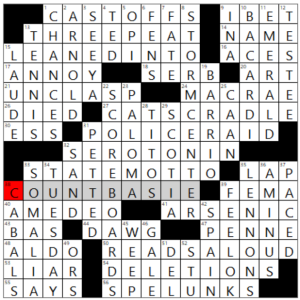 Nice to see Martin’s byline again! I am 100% okay with this grid not having stacks of 15s. This 66-worder has a good mix of fill lengths. 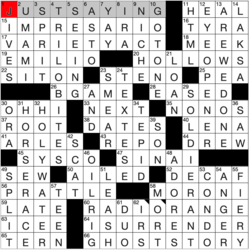 For a puzzle that started out pretty easy in the NW corner, this turned out harder than I expected. Some notes: 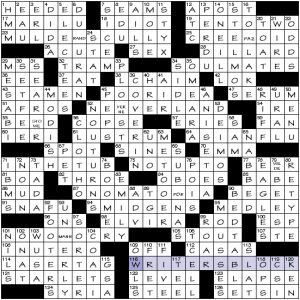 {Write-up to come later in the day} 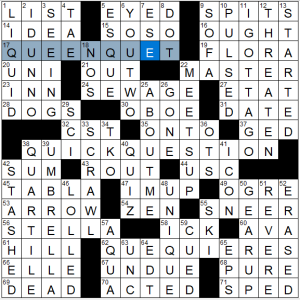 I like the theme set. Former linguistics students will likely recognize the Gullah/Geechee Nation, which is a common example for its relative isolation and resulting dialect development. The current chieftess is author Marquetta L. Goodwine – I’m not clear right now if QUEEN QUET comes from a title, or is in reference to her name.

As we often see in the USA Today, three theme entries allows room for fill to shine. Let’s get to notes:

Have a good weekend! 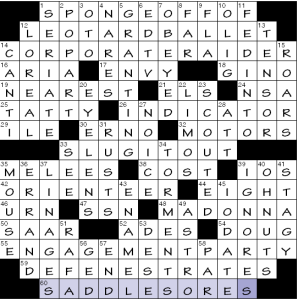 {write-up to come later in the day} 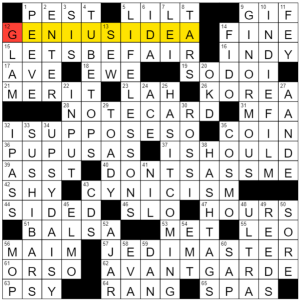 Another fun and breezy solve from Rafa today. With LETSBEFAIR, ISUPPOSESO, ISHOULD, LIFELESSONS, DONTSASSME, and HASITCOMING, this puzzle feels like it’s having an internal dialogue with itself. Super cute!

I found the most joy in today’s puzzle in the clues for the shorter entries, which is a hallmark of Rafa’s work: GIF [9A: Image file whose pronunciation is contentious] and ELMO [45D: Beloved red monster] are highlights. Best clue of the puzzle goes to SUSHIBARS 33D [Restaurants you can go to for your own sake?] 👏

I learned about KOREA (26A: [Joseon Dynasty’s peninsula]). The Joseon was the last dynastic kingdom of Korea, lasting from 1392 until the beginning of the Korean Empire in 1897. Seoul (then known as Hanseong) was founded as the capital of Korea in 1394, in the very early ears of the Josoen Dynasty.