Theme: HANG IN THERE – the theme answers are all places to “hang”, in different senses of the word. 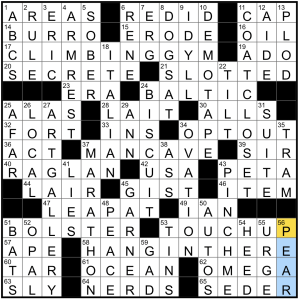 Loved today’s theme – it’s easy enough to understand from a Monday-theme level, but the different forms of hanging elevates it. In that way, COAT CLOSET and ART MUSEUM are a little redundant. That being said, I solved this puzzle with my mom, and she didn’t like that three of the answers were literal and one, MAN CAVE, was the more figurative “hanging out”, so to each their own. I also like how Margaret had some of the theme answers oriented vertically, in order to squeeze in 5 themers without sacrificing fill quality.

Oftentimes on NYT Mondays I don’t know what to say about the puzzle beyond the theme, because the fill and the clues are fine but usually simple and things I’ve seen before. Not so today – a lot of the fill was interesting and felt new, without being reliant on pop-culture knowledge that would bring up the difficulty level.

Favorite clues: 34d [A big one might be standing in a concert hall] for OVATION, 4d [Place where elbows bump on a plane] for ARMREST, 41d [Claims rated “four Pinocchios,” say] for LIES.

Favorite debates with my parents: “I’ve seen Mean Girls as much as anyone else, and I have no idea on 49a [Janis ___, “Mean Girls” sidekick]. People aren’t going to like that.” – my mom (IAN was a gimme to me). “I don’t think a she shed and a MAN CAVE are the same thing. Isn’t one a detached structure?” – My dad 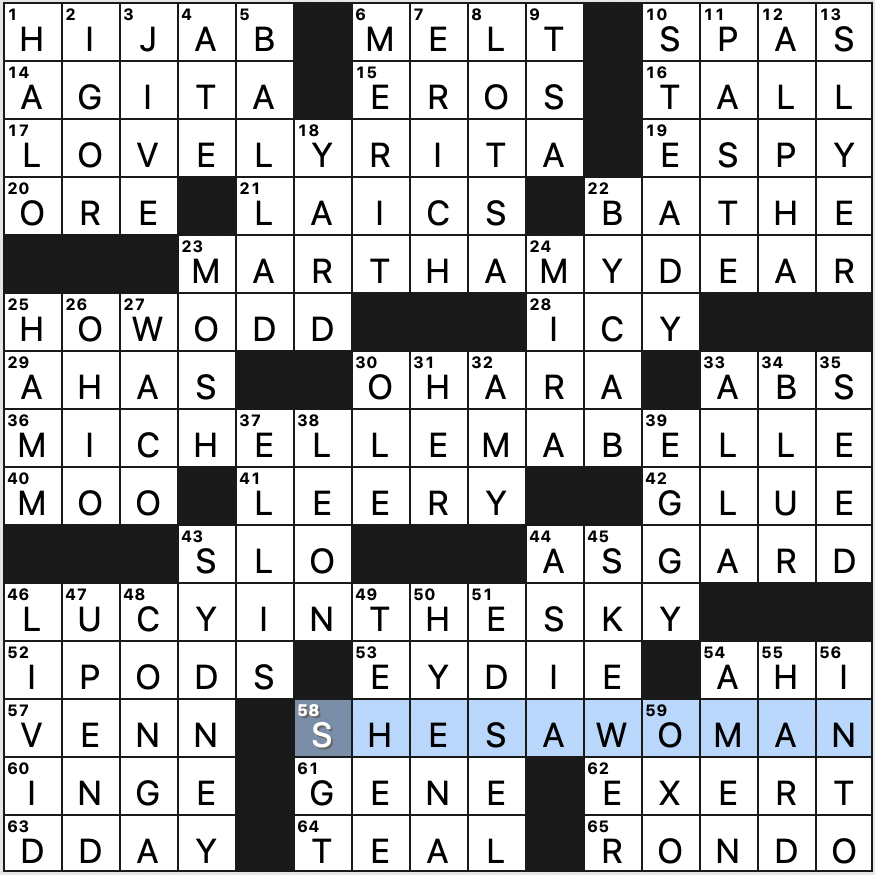 Despite being a child of the 70s/80s, the Beatles were my first band and I know just about all their songs, including the revealer used today, which I’m guessing most younger solvers won’t ever have heard of. It’s interesting that all of these songs were written primarily by Paul with the significant exception of “Lucy” which John penned.

As for the theme, I’m guessing you enjoyed it if you’re above a certain age and like the songs. I’m also guessing younger solvers will only have heard of one or two of these and thus enjoyed it less. I understand the liberties taken with the song titles, but it’s a little bit jarring when two of the entries are accurate and two aren’t.

There are no long fill entries today, but there are extra Beatles references scattered here and there and in keeping with the theme, references to a number of women. Some tough-for-Monday fill includes AGITA, LAICS, and RONDO.

This one was for the Beatles lovers. Others may not have enjoyed it so much. The fill could’ve used some oomph. 3.25 stars.

Here’s an unplugged version of Paul singing “SHE’S A WOMAN.” 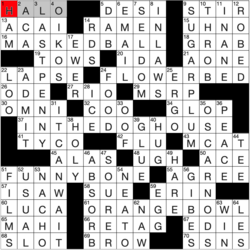 Arf! It’s a pupper-friendly puzzle! The central revealer at 37A [Out of favor with one’s partner, and where to find the ends of the answers to the starred clues] is IN THE DOGHOUSE. That is, each two-word theme phrase ends with an item that might be found, literally, in a doghouse:

I’m here for any and all dog-related content. Although I thought LAST PENNY seemed a bit green paint-y, I liked the other 9-letter nontheme answers (SUGAR PLUM, IT CAN WAIT, and OSCAR NODS). Pretty smooth grid overall! 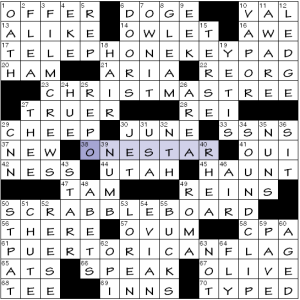 After encountering the first two theme answers I decided I had no idea what was going on, so I just let it flow. Fortunately, there was a revealer right in the center.

This is a nice early week theme. The theme answers were quite easy to get and there was a definite aha! moment. The rest of the grid is very smooth, again in line with a gentle puzzle. 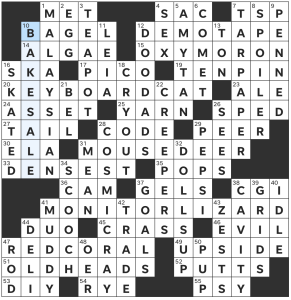 Good morning folks! Today’s puzzle gives us three theme answers where the first word is a computer term (KEYBOARD, MOUSE, MONITOR) and the second word is an animal (CAT, DEER, LIZARD). With a theme like this, I always wonder how the constructors came up with these answers. Did they just think really hard?? It feels like a tough category to brainstorm, so it’s cool they found three examples.

Also, this appears to be a debut for both of the constructors, so congrats to them! 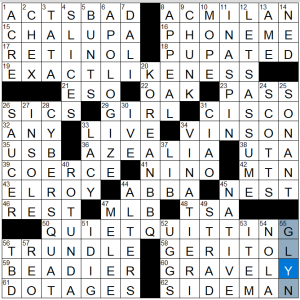 BEQ’s website promises a “doozy” today, but I managed this more smoothly than the last two or three weeks. My secret? Sports. Not necessarily more than usual from BEQ today, but a few entries in key places kept my momentum up.

The grid is lovely, with *five* down answers of nine letters or longer, and two long acrosses, including the in-the-moment QUIET QUITTING [50a Doing the barest minimum on the job]. There’s a wide range of knowledge bases in the grid, but I found AC MILAN [8a Italian soccer team that plays at San Siro] across the top row and Adam VINATIERI [34d Adam ___ (only NFL player who scored over 1000 points for two different franchises)], which bridged the lower and middle right, as well as the center, particularly useful for getting through the grid. Knowing the Pelicans in [54d Pels’ home] are New Orleans’ (‘NOLA‘) basketball team gave a valuable foothold in the otherwise toughest corner of the grid, with GRAVELY [60a Big name in lawn mowers] and GLYN [55d Recording engineer ___ Johns (seen in “The Beatles: Get Back”)] unknown to me.

Broadly, I found the fill image-rich: CHALUPA, DOTAGES, KOREAN BBQ, AZEALIA Banks, ELROY Jetson were all fun little pearls as I moved through the puzzle. I can say the same about a number of clues, but I’ll move into notes for that: 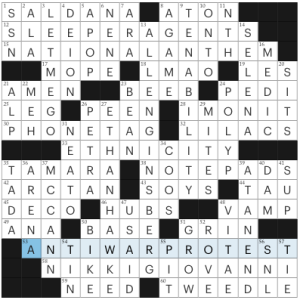 Fave fill: SLEEPER AGENTS, PHONE TAG, ANTIWAR PROTEST, NIKKI GIOVANNI. Note to commenter who believes that when I include a name among my fave fill, it’s merely because it’s a name I know: That’s wrong. I single those out because it’s a person I admire or because the person’s inclusion in a puzzle fosters representation of folks who aren’t straight white cis men. (And I won’t complain that the SALDANA/NENE and ANA/MCCANN crossings are hard. You should know one or both of the women in each pair.)

Easier than I expected for a Monday New Yorker puzzle. Four stars from me.