It looks like some aliens invaded this puzzle’s theme answers, and it’s up to us to find out what happens when we send them packing: 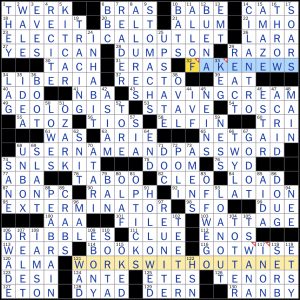 Reparsing the revealer gives us our aha moment: if we’re WORKING through this puzzle WITHOUT AN ET in each of the themers’ clues, those clues make a lot more sense! An ELECTRICAL OUTLET is indeed what’s in your wall, FAKE NEWS is indeed press junk, etc. I really enjoyed the aha moment in this theme and was really impressed with a lot of the finds! So many of the clues felt quite natural / in-the-language phrases, and I loved the reinterpretations of their ET-less versions. The revealer isn’t the most exciting to me (I might have preferred something more specific like ET GO HOME), but I still very much enjoyed going back to revisit each themer after the light bulb went off. Also, was [Maker of the E.T. the Extra-Terrestrial video game] for ATARI at 70D an Easter egg here? It seems odd to affirmatively include E.T. here, especially since we want the themer clues to be ET-less, but I am very likely overthinking that part.

My only difficulty with this puzzle was a bit of the north and SE sections of the grid. I couldn’t figure out ALL OF / FAKE NEWS / KEG for the life of me, and the GOT WISE / IN ON bit stumped me, too. [Cottoned on (to)] was certainly new to me. I can imagine ENOS / TSWANA could be a tough crossing for many folks.

Other random thoughts:
– 1A: TWERK [Do some backup dancing?] – Does it hint to my age that I got grumpy when MOONWALK didn’t fit here?
– 74A: SNL SKIT [“Black Jeopardy!,” for one] – For me, this is a great example of an entry that could have easily been clued through a white lens but wasn’t. I wish the puzzle had taken a similar approach at 109D by cluing EBONY via the magazine.
– 82A: CLEO [Letters to ___ (rock group)] – I will candidly admit that I got Better Than Ezra confused with Letters to Cleo here.  My only defense is that the start of the school year always scrambles my brain a bit!
– 81D: OPTICKS [Sir Isaac Newton work on the fundamentals of light] – I did not enjoy this spelling at all, but who am I to argue with Newton!
– 93D: LOAN OUT [Give for a time] – It felt odd to have this directly after [Excavated, with “out”] at 91D. 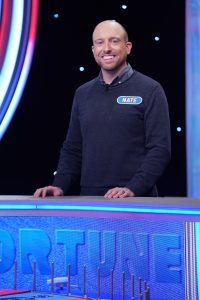 Nate on “Wheel of Fortune”

All in all, I quite enjoyed this puzzle and am curious to see if folks can come up with other reimagined ET-less phrases. What did y’all think? Let us know in the comments – and have a great week!

PS – As a fun aside, I’m excited to share that I’ll be on Wheel of Fortune this week! Tune in this Thursday 9/29 to see if the wheel indeed had any fortune for me. (Check your local listings for time and channel.) I can’t say anything about the episode until it airs but, as you can imagine, it was a dream come true for this word nerd to even be a contestant! 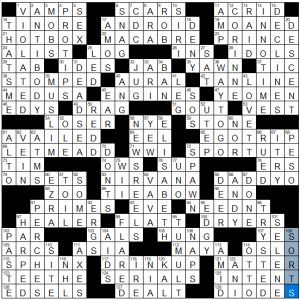 Mirror symmetry, and some short answers that don’t match the clues — [25a *Retreats in the woods] for LOG isn’t far into the puzzle. So what’s going on?

First, to the revealer, at 117a [“Cheers!” … and a hint to how six words in this puzzle have been raised by one row] DRINK UP. Looking more closely at the starred clues, the appropriate answers are there, working over black squares and back down to the next across entry. In the case of 25a, it’s LOG, the CAB of MACABRE, and INS [26a OFficeholders] to form LOGCABINS, a more sensible answer to [Retreats in the woods]. And we’ll see that each raised section is a type of (alcoholic) drink, fitting the revealer and title:

Whew! We’ve seen this theme mechanism before, but it catches me all the same. Consider that each theme entry requires two rows and three entries, and that block placement is an active part of the theme presentation, rather than something fit around the skeleton of the entries. I also notice that the theme entries are the only places where this mechanism could work in the grid — there’s no block of three or four black squares between entries not being used in the theme. How’s that for elegance?

No time for notes from me today – thanks to Evan for the early brain workout!

THEME: “Spaces” given ? clues rephrased as types of “rooms” 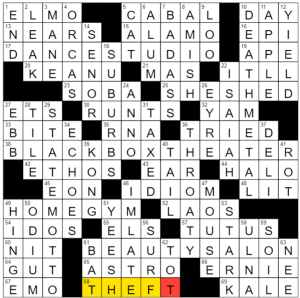 Drew brings together a set of “spaces” rephrased in “alternative” ways and given question mark clues. All five of the entries are actual rooms/spaces, while the clues differ in their literalness: 17A [Wiggle room?] isn’t a real room, but the other four are. Breaking this particular crossword “rule” doesn’t bother me as a solver, because they are all still fun and interesting. They are also easy to figure out without requiring any special knowledge, making for a super breezy solve.

Can we get a little justice for Jean Valjean!? THEFT 68A [Jean Valjean’s crime]. He stole a loaf of bread, robbed a house, broke a window, to feed a child who was close to death and for that, he gets *nineteen* years? Five for b&e, and another fourteen for fleeing the scene. smh.

I learned about “The Not-Too-Late Show with Elmo.” ELMO 1A [Muppet with a talk show].

Theme entries consist of familiar phrases of the form “Xs and Ys” that are re-imagined as being apt names for businesses. 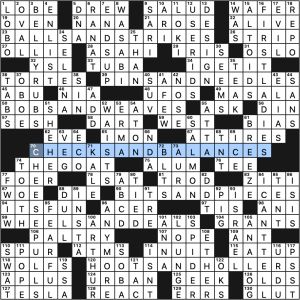 Very fun theme, and I found every answer to be spot on. I wouldn’t be surprised if this theme had been done before in some form (I haven’t checked), but even if it had, that shouldn’t take away from a very nice puzzle.

Plenty of fun long fill, too: BELLY RUBS, FIRST LADIES, “I GET IT,” “I CAN’T TELL,” and THE GOAT. I had to give a big side-eye to CHEESE PULLS though, since I have never heard the term. But apparently it’s a thing, and since I’m watching football while blogging, I’ve seen more than a few CHEESE PULLS during commercials. Not everyone likes them, though. 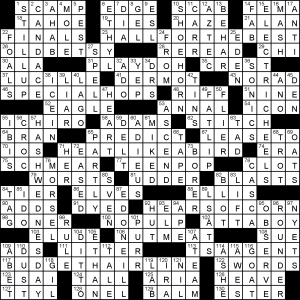 Gary Larson & Amy Ensz’s theme today is “Plush” or “plus h” with each phrase having an aitch added to it at the beginning of one of it’s words. We get 7 examples, of the nearly infinite possibilities, with two pairs crossing, for what that’s worth:

Theme: Each theme answer is bracketed by letters spelling out BOX. 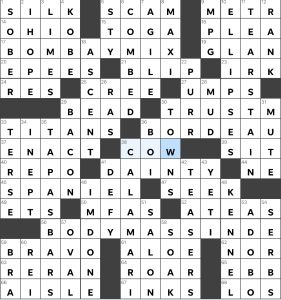 This was an interesting mix of themers. I think BOMBAY MIX, which is a snack made up of dried ingredients including fried lentils, peanuts, chickpeas, corn, and puffed rice, among other things, was such a fun answer. BORDEAUX was surprising, given that it didn’t split BOX across two words. However, BODY MASS INDEX is a powerhouse of an answer, pointing out how stigmas around weight are so unrealistic.

If you’re hungry, I would recommend not solving this puzzle until you’ve had a snack of some sort. There were mentions of 62a [“Edible seaweed types”] NORI, 35d [“Eateries that serve croquet as and chopitos”] TAPAS BARS, 3d [“Fruits needed for tom yum”] LIMES, 4d [“Highly marbled Japanese beef”] KOBE, 53d [“Sauce for canned chipotles”] ADOBO, 38d [“Seafood appetizer”] CALAMARI, and of course BOMBAY MIX. I also really enjoyed 18d [“Trip up a mountain”] ASCENT and 11d [“Streak left by a good cry”] TEAR STAIN (love a good cry).

Overall, I thought that this was a really smooth Sunday solve!