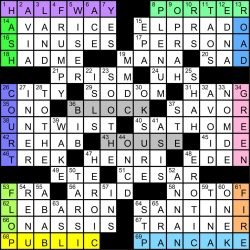 Hello there, everyone! Hope you all are doing well and staying safe and that you’re enjoying the cooler temperatures.

We have an around-the-world theme of a grid, in which the answers that make up the borders of the grid are all words that can come before the word house. Two other entries, BLOCK HOUSE, act as the reveal/instruction (43A: [With 36-Across, stronghold (and a hint to the puzzle theme)]).

Highlight for me were the chunky blocks of seven-letter entries in each corner of the grid, and I remember my dad mentioning ONASSIS once in comparing his riches to my dad’s lack of money, and I remember not knowing who the heck he was (66A: [Aristotle born in 1906]). PERSONA also was fun to see in the grid as well (17A: [Literally narrator or character]). It’s getting closer to winter time, and my lack of motivation in wanting to run during the cooler months has me thinking I should invest in getting a TRAINER to maintain whatever shape that I got into during the summer (67A: [Fitness guru]). Probably am going to remain being stubborn in not ever spending money on a fitness center/gymnasium to stay in shape. Really need to get rid of that mental block soon enough!

“Sports will make you smarter” moment of the day: LEBARON (62A: [Old Chrysler model]) – One of the first people who defied expectations despite his size in the National Football League, 5-foot-9 Eddie LeBaron played quarterback for the Washington football team and the Dallas Cowboys from 1952 to 1963, making the Pro Bowl four times. He was the NFL Rookie of the Year in 1952 after serving in the Korean War, and ended his career with 104 career touchdown passes. LeBaron, known for his scrambling ability, remains the shortest quarterback to ever to be selected to the Pro Bowl. 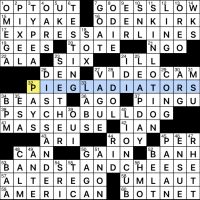 Hello, dears! This week’s Jonesin’ puzzle has a national theme, so let’s break it down.

These all seem pretty randomly thrown together, until the revealer shows up with its aha moment goodness:

So the first theme entry gives us American Express and American Airlines, etc. Not bad! BANDSTAND CHEESE does nothing for me, but I did giggle at the thought of a pie fight to the death in the Colosseum.

That’s it for now. Until next week! 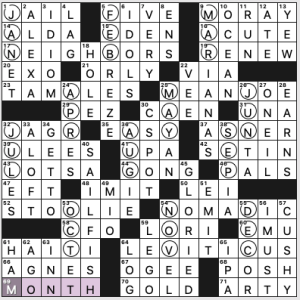 Shorter reviews from me these days because the thing that sent me to back surgery six months ago has recurred, and the ergonomic positions for sitting at a computer hurt. So … short recaps.

Theme: 69a. [Any of 12 represented in this puzzle’s shaded squares], MONTH. The circled/shaded squares within longer words contain 3-letter abbrevs for months, from JAN through DEC.

Three stars from me. Add up the words with the months + MONTH, and you get about 70 theme squares. Hard to get smooth fill in a 15×15 grid with that much theme.

Theme entries are idioms which roughly mean “conform,” which is the clue for each entry with an added context. 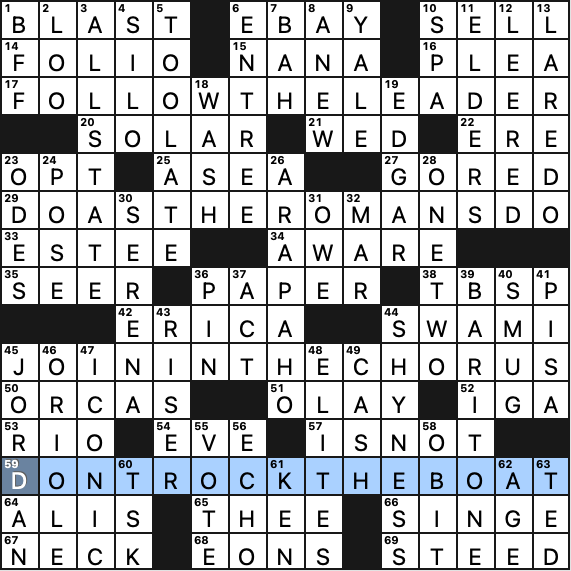 Pretty neat how synonymous these are and that they’re all grid spanners. A nice discovery! I would say that JOIN IN THE CHORUS feels less like conforming and more like adding one’s contribution to the whole, thereby ensuring strength in numbers. But it’s not that far a leap to an alternate definition. Impressive themeset.

Some nice longer fare in BARITONE, ALLSTATE, ARAPAHO, and “TOO LATE.” And nary an entry to scowl about.

I would never have guessed there was a musical group named The Hues Corporation, but here we are. Though I didn’t remember their name, I certainly remembered their big hit. But I can’t tell if the message is DON’T ROCK THE BOAT or conversely, go ahead and “Rock the Boat.” I guess take it however you’d like to take it. Enjoy this flashback.

I’m not going to go through and count, but it seems to me that we’re seeing a lot more women in the LAT constructor lineup since Patti Varol became the editor there. Go, Patti!

The revealer confused me for a minute. Let’s take a look. The grid is 16×16, which gives Christina room for two nice 16-letter entries. 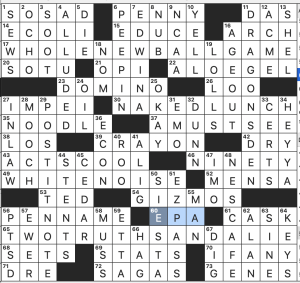 And the revealer that had me, well, puzzled: 65a [Ice-breaker activity involving three claims, or what the starts of the three starred clues literally are] is TWO TRUTHS AND A LIE. At first I thought one of the entries was a lie. I must have missed “the starts of” in that clue, because it’s WHOLE TRUTH, NAKED TRUTH, and WHITE LIE. A very satisfying theme in a Tuesday-appropriate puzzle. Nothing in the fill bothered me. I admittedly did the puzzle in a post-matzah-ball-soup fog on Monday evening, so it’s possible I missed something.

What I didn’t know before I did this puzzle: that Michael S. Regan is head of the EPA. Shame on me. 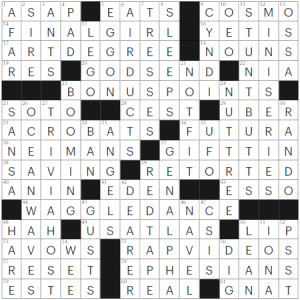 I HAVE SLIGHTLY LESS PRESSING QUESTIONS

I HAVE SOME FAVORITES

Editor:  Anna Gundlach and Erik Agard
Theme: Each theme answer is surrounded by the letters “BFF” 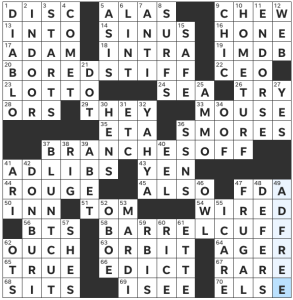 I haven’t seen Anna’s name as a USA Today editor before, so that’s exciting!!

Solid “letters surrounding the theme answers” theme, with some uncommon letters to up the interest level. BORED STIFF was my favorite theme answer, although I am not sure about the clue since I know folks who doodle as a concentration technique.

It felt like there were a ton of black squares today – maybe that was because they were all concentrated in the middle of the puzzle? The length of BRANCHES OFF kind of requires a weird grid configuration, but the grid felt choppy to me. That being said, I liked BLUNT CUT, DON BURI and  HOME TURF as fill.