Our revealer is BACKUP CAMERAS (35a, [Standard equipment on some new vehicles, and a hint to the circled letters]). Said circled letters spell well-known camera brands going backwards and turning up. 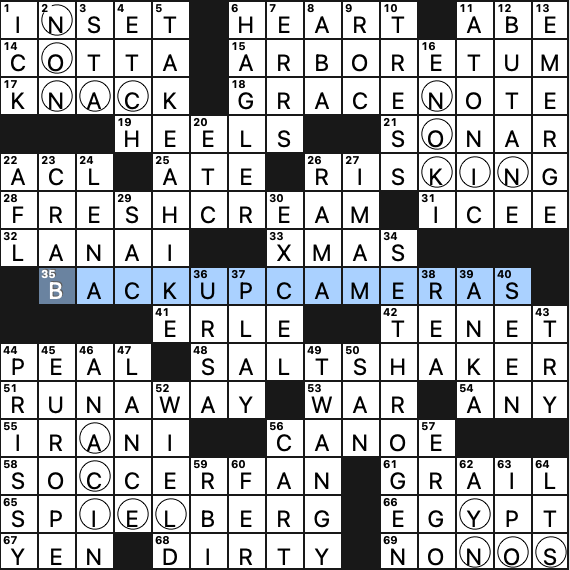 The camera brands are Canon, Nikon, Leica, and Sony. I mainly know Leica because my dad was a professional photographer, and he always wanted a Leica, but they were much too expensive. As for Sony, it’s known for making a lot more than cameras, so I would have gone with something else—Go Pro, maybe (it’s five letters long, too, like all the others). But that’s a nit. Solid theme and execution.

As for the rest of the fill, it solves like a themeless, and a nice one at that. We have two 9-stacks (ARBORETUM/GRACE NOTE and SOCCER FAN/SPIELBERG) as well as the long crossings of TAKE A HIKE/FRESH CREAM and SETH ROGEN/SALT SHAKER. Plus the song RUNAWAY thrown in for good measure. Those NE/SW stacks are especially impressive given their size and the presence of two theme entries. 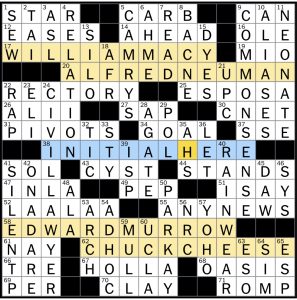 Solved on my phone and am blogging from my phone for the first time. I don’t care for it!

Fave fill: COMMON SENSE. Unfaves include the dreadful AH ME, which I wish would be deleted from constructors’ word lists because it’s not a thing we say!

43a. [Growth under the skin], CYST. Yes, but a great many cysts are not just beneath the skin’s surface. Ovaries, kidneys, livers, and in the spine. The latter is why I’m lying flat on the couch to blog.

3.5 stars from me. AHME really counteracts a solid theme and I do deduct points for it. 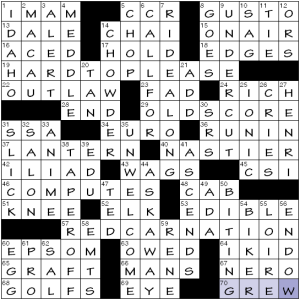 In which familiar words and phrases are reparsed, sort of like jockeying cars in a traffic jam.

Not my favorite theme, but it suffices. Could have been a bit more consistent such as being all types of cars, or all makes of cars.

Theme-adjacent: 48a [Trucker’s compartment] CAB. 54d [One may be on a hog] BIKER. 1d [Its license plates say “Famous potatoes”] IDAHO. 7d [Opportunity to accompany a trooper] RIDE ALONG. 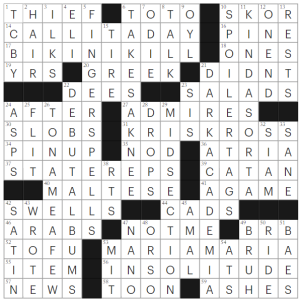 Fave fill: CALL IT A DAY (is it 5:00 yet?), STATE REPS, TO NAME A FEW, FINGER-SPELLS, TAKES A KNEE, KINDA SORTA, and the musical vibe of BIKINI KILL, KRIS KROSS, “MARIA MARIA,” DEBUT ALBUMS, and DROPS clued as [Releases, as a song].

10a. [Candy bar that sounds as though it should come in packs of twenty?], SKOR. Because a score is 20. My first thought was TWIX, though that would work better if it were TWIXX with a Roman numeral XX in it. Also, I’m hungry for lunch and those are both excellent candy bars. Is it permitted to focus on caramel, toffee, and chocolate for a meal?

Fairly smooth solve, though just the right amount of challenge for me. 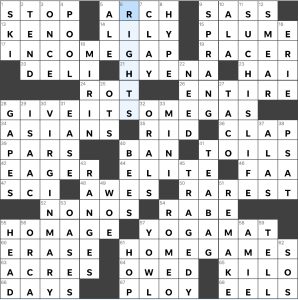 A fun set of themers! Based on the title, my hunch for the commonality was correct and helped me fill them all in fairly easily. The cluing for INCOMEGAP honed me into that one immediately—always fun to fully lay down a themer right away. My first instinct for GIVEITSOMEGAS was “step on it” but that didn’t fit the pattern though based on a couple of crossings that I already had at the end, so I filled in the shared theme word then topped it off, so to speak. I slid right into HOMEGAMES when I rounded that base too. Love this!

Great puzzle overall and grid, however all of lengthy bonus fill had me searching a little in the bottom half since the first two were in the top. Since themers tend to be all in one direction, it seemed likely that the third was an across as well but at first glance, there didn’t appear to be an obvious third themer, as they usually stick out a bit more. YOGAMAT is draped over it and is of a similar length and the paired fours stacked below gave the illusion of a nonthemer for me today. The cluing for the third one was great and made it clear that it was the third once I got to it. Did you feel the same? 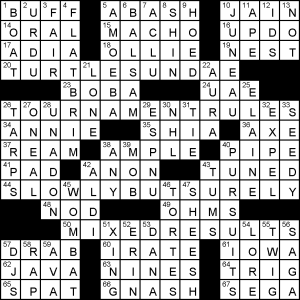 [Ambiguous outcome, and what the circled letters literally contain], MIXEDRESULTS is the revealer of Wednesday’s puzzle by Brooke Husic, and each of three answers has the letters of RESULT scrambled and hidden somewhere. A [Fudge-and-caramel ice cream dish], TU(RTLESU)NDAE is a dish I haven’t heard of. Google suggests it’s a bit like our “Chico the clown” sundae. [Regulations for a big contest], TOURNAMEN(TRULES) is a bit bland, and the clue is pretty awkward too. [Gradually and reliably], SLOWBU(TSUREL)Y is more idiomatic, and has a kind of a synergy with TURTLESUNDAE.