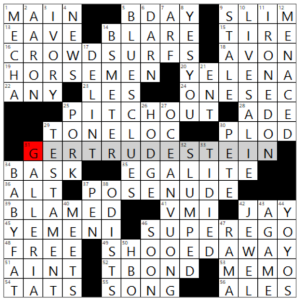 Untimed, because it’s been a long week with misbehaving nerves and sleep debt. Felt like a Saturday puzzle.

Never heard of: 25a. [Strategy to prevent a runner from stealing a base], PITCH OUT. Good gravy, the World Series goes into November? I thought baseball was almost done.

Fave fill: CROWD-SURFS, GERTRUDE STEIN, POSE NUDE, SHOOED AWAY, BABY FAT, BLUE’S CLUES, OCEAN VUONG, LIVES A LIE. Not sure about B.S. METER; bullshit detector feels more familiar to me but I’m sure there’s lots of variance in what you use. YEMENI takes me back to a Brooklyn ACPT when Tony Orbach and his daughter Sko led a bunch of us to a Yemeni restaurant for lunch, and everything was delicious.

Love [Final four?] as the clue for the four HORSEMEN of the Apocalypse.

I’ll close with a link to one of Natan’s poems, “The Runners.” Greek myth’s “Atalanta zoned for wildness” is a lovely bit, Natan. 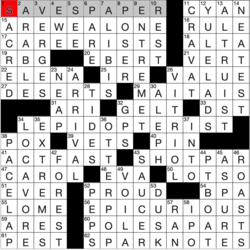 This all adds up to…I wanted to like this puzzle more than I do. I wish there were more stuff of interest in those top and bottom 10-stacks; the top one felt like it was missing the elusive “sparkle” and the bottom one felt almost like ads found their way into my puzzle with two different 10-letter websites with paywalled content (EPICURIOUS and SPARKNOTES). 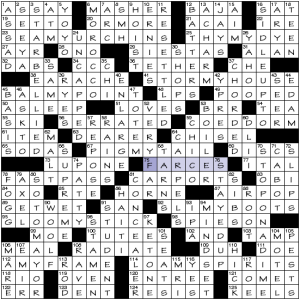 Insertion of the bigram MY in familiar phrases, always at the end of the first word—or first part of a compound word—creating new adjectival phrases. What I didn’t perceive initially is that it’s homophonic, so spelling can change—but that wasn’t the case for the first one.

So those all work, and some of the clues end up being rather poetic.

The puzzle played a little tougher than I’m used to from the Saturday WSJs, but I fortunately seemed to know a lot of the trivia-like answers and was able to get through it without too much hassle. Biggest impasse was figuring out which one letter was off at the very end. Turned out to be the crossing of 34a [One of FDR’s most popular New Deal programs] CCC—which I did not know—and 35d [Antepenultimate letter] CHI, for which I’d hastily put in PHI. 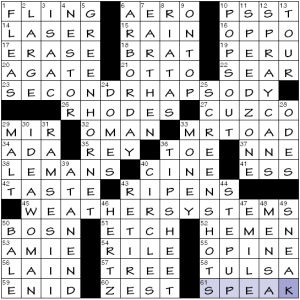 True to the byline, this one fell rather quickly, but that northeast section gave me solid resistance. The biggest impediments were filling in RTE at 37-across for [GPS reading] NNE and being stymied by 19a [Amazon’s origin] PERU, thinking only of the ANDES. This despite 27a [South American “Historical Capital”] CUZCO being right there. Incidentally, for that one I left the third square blank until I figured out if we were spelling it with a Z or C; the crossing 11d [Take it slow] for SPEED ZONE was a tricky imperative. 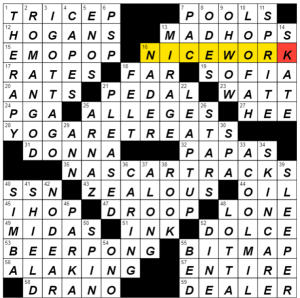 NICEWORK (16A [“Well done!”]) today from Garrett Chalfin in putting together a really clean grid that lends itself to plenty of fun wordplay throughout.

I learned about HOGANS 12A [Navajo dwellings]. Hogans are structures made of combinations of stone, timber, and packed earth.

The paired long entries of YOGARETREATS and NASCARTRACKS are begging for identical tricky clues (if in a trickier puzzle). Maybe something like [Places with long stretches?] ? Give me something better in the comments. :)