Wait, is this a miracle? Multiple Sunday NYT puzzles in a row written by women?! I’ll take it! Here’s to hopefully many, many more.

The title of this week’s puzzle implies that we’re about to get le-d. Let’s take a look: 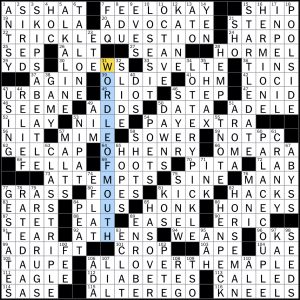 Each of our themers has gained an additional LE for comedic effect, and I really liked the inventiveness of many of these entries! WORDLE OF MOUTH has to be my favorite just for how incredibly current (and on brand!) it feels, and CLASS TRIPLE was a fun transformation to describe a super common phrase. STARTLE DATE felt a bit stilted (and the clue felt a bit unwanted sexual advance-y) and coups never feel quite fun to joke about, especially after January 6th, so I wasn’t as keen on PALACE COUPLE either. That said, a fun idea explored to largely solid effect in my eyes.

Other random thoughts:
– Aside from a few partials and other bits (AGIN, I LAY, TNOTE), this grid felt quite clean and led to a super quick solve time for me!  I hope it felt super smooth for you, too.
– 1A: ASSHAT [Complete jerk] – Now that’s certainly a way to start off a puzzle!
– 28A: HORMEL [Spam generator] – Okay, this was cute.
– 116A: KNEELS [Protests, in a way] – And what a fantastic way to end the puzzle, too.

What did you think? Can you come up with any -LE transformations that could make for fun themers? The first thing that pops to mind is [Story of a woman’s trip to Pamplona?] for LADY AND THE TRAMPLE, but that’s quite grim! Let me know what you come up with. For now, be well and have a great week. 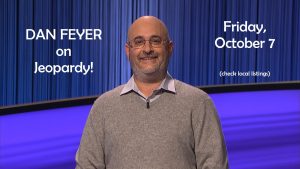 PS – Another fun aside! Last week, I was lucky enough to be on Wheel of Fortune. This coming week, crossword legend/icon and editor of cryptics at The Browser, Dan Feyer, will be a contestant on Jeopardy! Tune in on Friday, October 7th to see him in action. :D

The revealer is SKIP AD (106d, [Button over a YouTube video interruption, and a hint to interpreting each starred clue]). The clues to the theme answers should be read after eliminating the letters AD found therein. 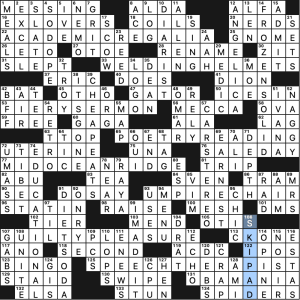 I was floundering with the theme for about a third of the solve. I’m not sure what clicked, but suddenly I had my aha moment well before I got to the revealer. My initial reaction was disappointment because we just saw this gimmick two days ago in the Friday daily puzzle (titled “Don’t Start With Me!”). Plus, I was hitting entries like SALE DAY which I’m not sure is a thing and DO SAY which I know people don’t say. (They do say [“Pray tell!”] or “Do tell!”.)

Since I’d already grokked the theme, I wasn’t looking for or expecting a revealer. Thus, when I stumbled upon it, it caught me by surprise, and a welcome one at that because it was spot on. Every time I turn to a YouTube clip and I’m anticipating seeing the video I want, an ad shows up and I start looking for that cherished SKIP AD button.

Then I started appreciating the theme clues. Take [*Advantage point in tennis] for example with the answer UMPIRE CHAIR. “Advantage” and “point” are words used in tennis, so the clue seems like it might make sense. But the fact that the clue is actually “Vantage point in tennis” to refer to that lofty perch, the UMPIRE CHAIR, feels sublime. Similarly, a “Valedictory address” is a real thing, as is an “Addiction specialist.” But so are their AD-less versions. Really, this is some lovely cluing.

And there’s plenty to like in the fill despite my earlier misgivings. Favorites include ANGELICA, FROZEN SOLID, “IT’S GONE!,” CHEAP EATS, CAR STEREO, EX-LOVERS, OBAMANIA, DIET SODA, and “I MADE IT!”

Very nice puzzle. I just wish it was farther removed from the Friday puzzle with a similar gimmick. Four stars.

THEME: All answers have the word ROLL spanning BACKwards through a phrase, thus the title “Roll Back” 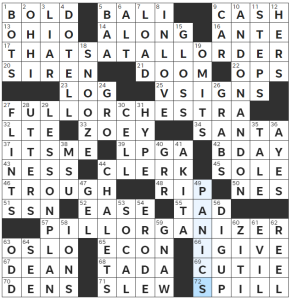 This was a super breezy (even pre-coffee!) solve this morning. Animal facts? Sign me up! And a nice theme that works really well – THATS A TALL ORDER is a great find. (and also gives me another theme idea or two…) 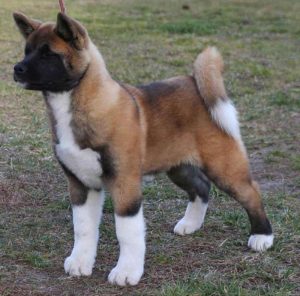 Two reviews for the price of one today; I’m also writing this puzzle up for Sally’s Take. 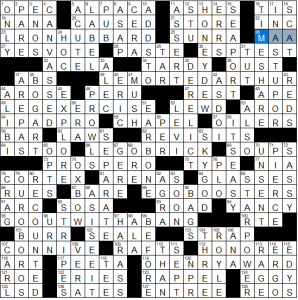 Evan builds us up and breaks us back down today. Our revealer is neatly in the middle of the themers:

So we build up to LEGO from the L, and back down the O, and each themer’s part of LEGO is a standalone word in its phrase; a big plus for me alongside just a plain colorful set of phrases.

I’m excited to be writing on Adrian’s Universal 15×15! I thought that this was a really fun themeless with plenty of great fill. 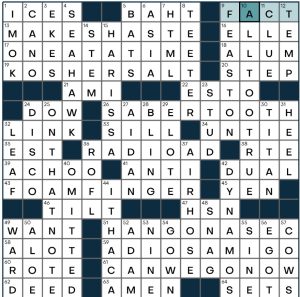 I thought that these were all really fun, and I loved that they stacked three and three in the NW and SE corners. It’s always fun to hear vernacular phrases like CAN WE GO NOW and HANG ON A SEC in puzzles, and it was impressive to see these all so close together. 4d [“Seattle NFL player”] SEAHAWK, 59d [“Spicy North African condiment”] HARISSA, and 8d [“Sway like a Jenga tower”] TEETER cross all of the NE marquee answers, and 37d [“Tube for inflating a tire”] AIRHOSE, 42d [“Energetic sorts”] DYNAMOS, and 44d [“Cornell’s home”] ITHACA do the same in the SW. This is all to see that the fill was really fresh, despite the stacks.

Outside of those, I really enjoyed 36a [“Pitch heard but not seen”] RADIO AD, 43a [“Oversize prop for a sports fan”] FOAM FINGER (which, with 30d [“Tennessee NFL player”] TITAN felt especially appropriate with SEAHAWK on a football Sunday), and 25d [“‘Speaking of which…’”] ON THAT NOTE.

There was a great balance of ROTE recall and fun wordplay in this puzzle. 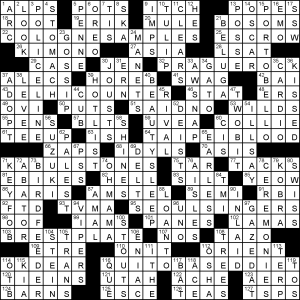