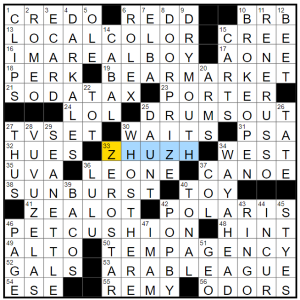 The word of the day is ZHUZH, clued as [Dash of panache], but it’s also used as a verb. I first encountered it on the original version of Queer Eye, where it was used for things like running your fingers through your gelled hair to lend a stylish bit of casual messiness. It took a while to settle on a spelling. The Oxford folks tell us it’s British English, with zhoosh and zhush spellings that I think are less common here.

New to me: 46a. [Where fur might collect indoors], PET CUSHION. Is that like a dog bed?

I don’t think this puzzle was harder than the typical Saturday NYT, despite my solving time. I seldom solve on the NYT site, and didn’t have the navigation tools set to my liking. Maybe next time! If you use the PuzzleMe interface (which I’m fast with) for puzzles from the New Yorker, Boswords, etc., what NYT settings are closest to that? 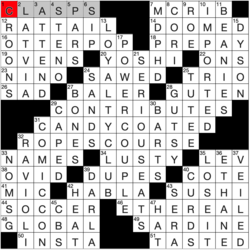 Overall: This was fine, but I would’ve liked more zing out of those central 11s. 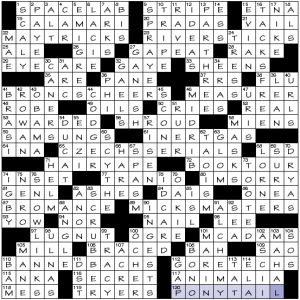 In which the /ks/ sound is altered via spelling. The original versions all contain an x. So, homophones and such.

There are some inconsistencies among the theme answers. First, there are some gratuitous pluralizations to achieve proper entry length: not really a big deal. I found the possessive  form of CZECH’S to be not only superfluous but a little weird—plus, the clue should also contain a possessive, unless I’m completely misinterpreting things here. The greatest inconsistency, however, is that sometimes the accessory element is also respelled: SERIALS/cereals, MAY/ma-, BANNED/band. That’s just weird and off-putting to me.

On the other hand, overall the theme entries are amusing. 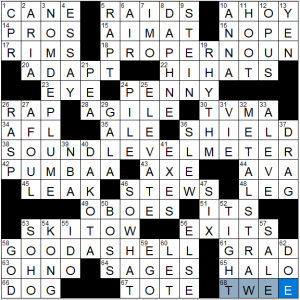 Our theme involves synonyms of “right” on the left ends of phrases:

In preparing this review, I was thrown off by the phrases “right good” and “right proper” while not making any sense of “right sound,” but the theme is simpler than that. That said, if you’re in DC and drink beer, Right Proper Brewing is a good place to find yourself. I miss it.

Otherwise, an extra-ordinarily straightforward grid, even for the generally-gentler USA Today. It’s rare that I don’t learn something new from a puzzle, and with relatively little theme content, it’s even more surprising today. NOM DE PLUME is a colorful entry, the “Scooby-Doo” cluing angle for DAPHNE brought a smile to my face. Have a good weekend! 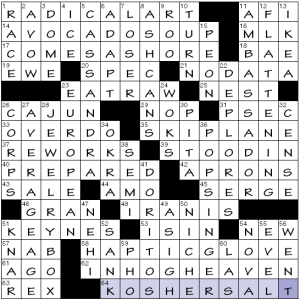 This one put up a lot of resistance, most notably for me in the upper-left and -central section. It’s a relatively well-integrated grid, so I’d say it was purely the toughness of the cluing that makes it so.

Where do I start? There are just so many oblique clues throughout. From 1d [Zip it] for RACE to the weird (but legitimate) 64a [Crystalline cleaner for cookware] KOSHER SALT, it was just a nightmare—but in a good way, I guess.

Yes, that was a workout. Glad it’s over! 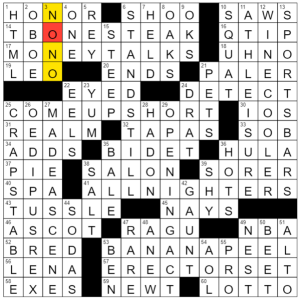 I don’t know about anyone else, but every time I’ve attempted to pull ALLNIGHTERS, I just COMEUPSHORT the next day.🤷‍♀️

Fourteen ten- and eleven-letter entries here – each one a real thing – give this puzzle tons of color. This is the kind of grid that as a constructor I want to just refill over and over again. I generally like a little more trickery and slight misdirection in a themeless; the clues here are majority straightforward.

A bit of a shorter write up from me today as I’m getting ready to take a handful of teenage girls to Six Flags. Wish me sanity!