Title: “Four by Fours” by Pete Muller
Prompt: The meta for this puzzle is a rock group.
Answer: SPLIT ENZ 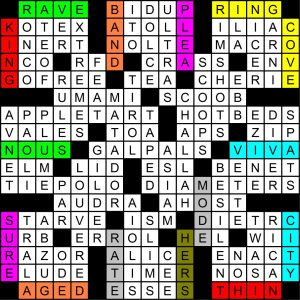 October already? It would seem so. Pete’s challenge this month is, well, Mullerian — no overt theme entries (judging by length), just scan the grid with your pattern recognition powers set to 11 and see what pops out.

“Four by Fours” was the title, and with sixteen 4-letter entries in the grid I wondered if they would form two 4×4 magic squares. They did not, so I looked for other ideas. Shading the sixteen four-letter words did the trick, as my brain on “rest mode” managed to find VIVA/CITY at 51-A and 71-D, and then off to the races. The list of eight four-letter pairs forming eight-letter grid entries is:

Clearly not by chance, but now what? Second step was to notice that each of these eight 8-letter words also appears in a clue. They are:

So from the first letters of those (ZLSINEPT) I anagrammed to the 1980s New Zealand band SPLIT ENZ, which both describes the meta mechanism (the two ends of each 8-letter word are split, u must reattach them). And I of course grinned when I realized that in addition to their one big hit, “I Got You,” they also wrote an execrable semi-hit called “Crosswords,” which must’ve been Pete’s hidden reason for choosing this obscure-ish band as his meta-answer.
https://www.youtube.com/watch?v=rF4Tj2ODoP8

But no! Amazingly he was unfamiliar with this song, making SPLIT ENZ an especially lucky meta answer! I know there’s a more logical way to order SPLIT ENZ than anagramming but I saw the anagram right away so never puzzled out the proper route. And now it’s 11:03 and I need to post so someone pls post the intended path there in comments.

4.50 stars, fun. My streak continues! See you next month.