Theme: Each theme answer has the string “PAR” in it twice. 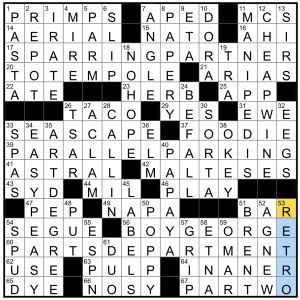 This puzzle’s biggest sin was getting me really hyped up by the mini-golf related revealer. I love mini golf, and was very curious how it would relate to the theme – something about a windmill? A hole in one? So then I was a little let down by the not particularly exciting answer of PAR TWO. It’s fine and explains the theme well, but it doesn’t shine as a revealer or parse in an interesting way, and with the set up I was hoping for a little more.

The theme answers are all grid-spanning 15 letters across, which is a neat bit of consistency. I looked at my own wordlist, and these three are the only 15-letter answers that I have that contain PAR twice. Given that, they’re all pretty good, the first two especially. I have never been to a PARTS DEPARTMENT and had no idea it was called that, but the wordiness of the clue helped me figure it out.

There being only three potential theme answers means that Byron didn’t have a lot of grid options, but I like what he went with. There are a whole bunch of cool entries today, from BOY GEORGE to TOTEM POLE to the stacks of EASY PEASY/ART DEGREE and MANIPEDIS/CHEAP WINE (now that sounds like a fun night). I didn’t love the six black squares extending from the NW and SE, because they chopped off a lot of entries into those corners and made them feel separate. A CLAM is also pretty bad, but at least it can be clued easily! Throw it all together and you get a solid Monday, at least in my opinion – Let me know yours!

Theme entries consist of idiomatic phrases that end in a farm animal. 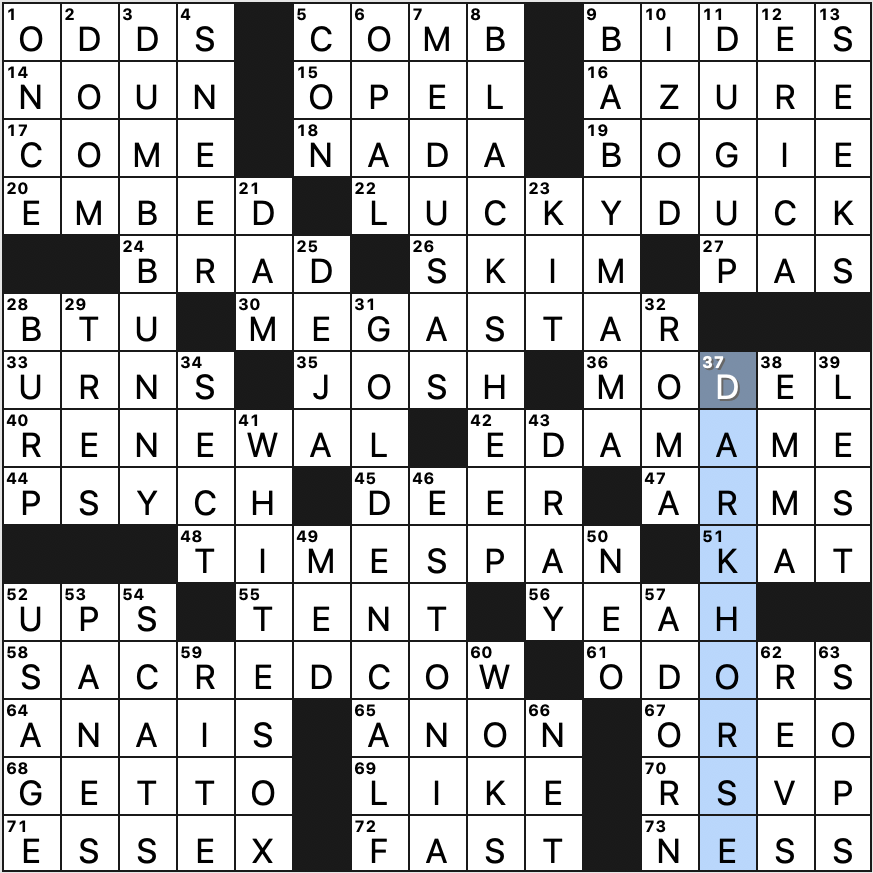 Straightforward theme for a Monday. I was a little confused as to the purpose of the “on the farm” phrasing, since the clues work without it added on. But I guess it helps identify which entries are theme entries since they appear in both directions and we have other long entries that aren’t part of the theme. One other nit is the appearance of both COW and CALF which feels like a dupe, especially with them crossing at the C. But it’s still a fun, enjoyable set. 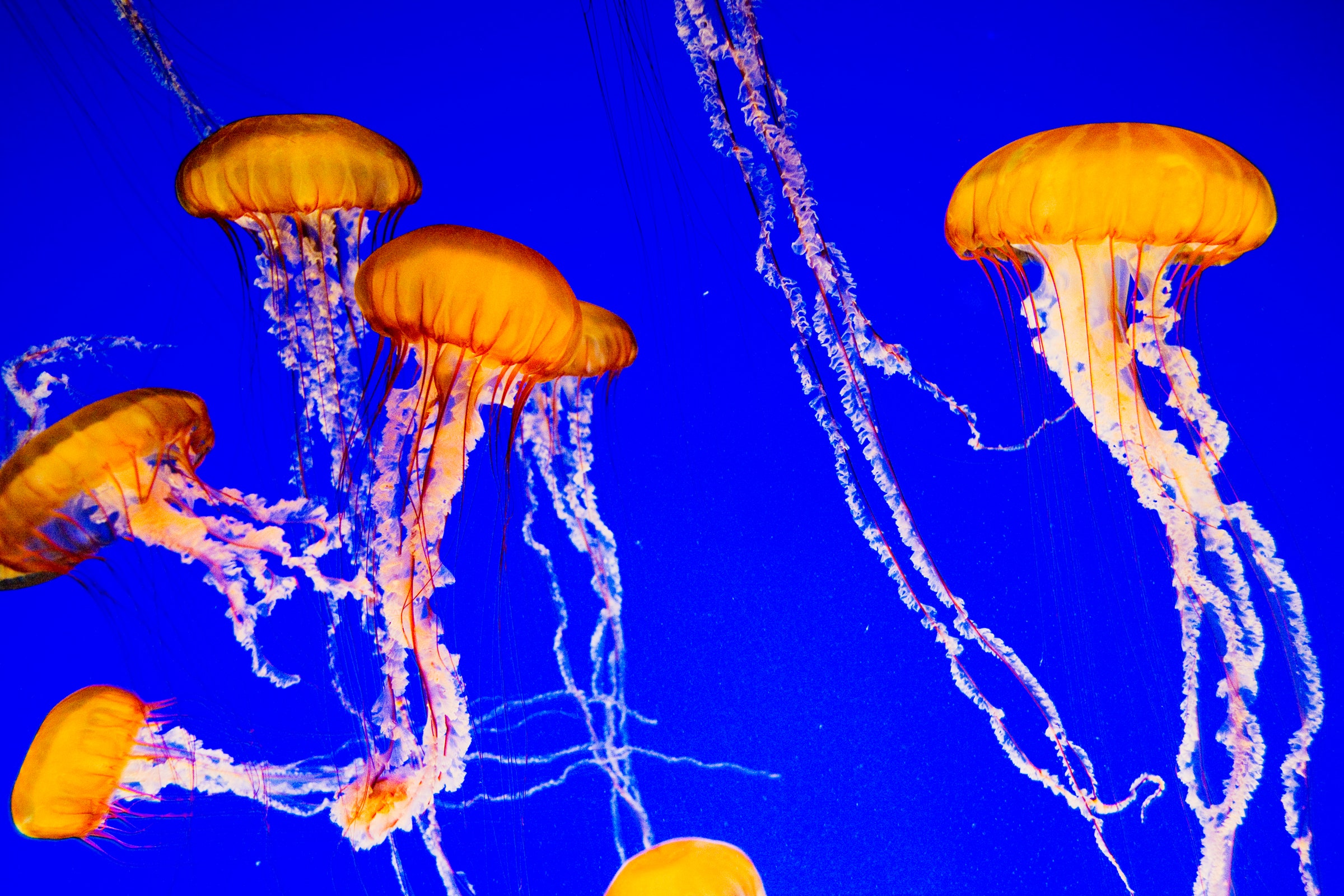 I’m liking BABY MAMA, WHITE SOX, MEGASTAR, TIME SPAN, EDAMAME, and MEDUSAS (the jellyfish) in the fill. Nothing much to complain about, but I’m not a fan of phrases like GET TO. Maybe if it was clued [Bother] rather than [Arrive at], it would get to me so much.

Clue of note: 42a. [Steamed or boiled soybeans]. EDAMAME. We generally steam them then add a little salt and pepper. Once I added butter, thinking that might enhance the flavor, but nope. Never again. If you’ve got some EDAMAME tips, please share. 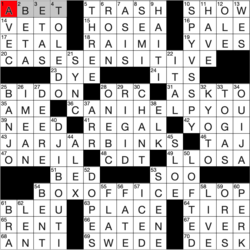 I couldn’t tell you exactly when having a revealer became nearly de rigueur on Monday for a theme of the “first/last words in theme answer all belong to a certain category” type. This puzzle doesn’t have one, which I’m totally fine with but might trip up a newer solver. Each of the themers begins with some kind of container: CASE, CAN, JAR, and BOX:

Not having a revealer didn’t slow me down (wait, crosswords have themes? I usually find out what those are after I’m done solving), but I imagine it would some newer solvers, as would the proper names of Mario Vargas LLOSA and Phillipa SOO in close proximity to each other. SPY VS. SPY at 10D also feels like a bit of an oldie to be in an easy puzzle. Also, [Puzzles (out)] seems like a needle-scratch hard clue for DOPES at 52D. I had never heard this use of DOPES and Google/Oxford dictionary definition seems to validate that, calling DOPE OUT a “dated/informal” usage. That could easily have been a much easier clue, whereas the LLOSA/SOO area (combined with the aforementioned FLOP/BOMB and LOFTED/LOBBED ambiguity in the same region) and SPY VS. SPY IMO should’ve pushed this puzzle to a different day of the week. 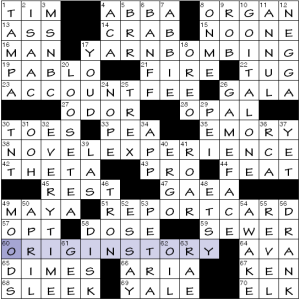 That’s a nice bunch of answers. 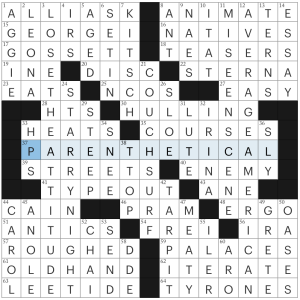 I do use the word PARENTHETICAL a lot in my work—there are crossword clues that benefit from a parenthetical to give some context. How cute that the word is flanked by a pair of brackets here! Really, the closest you can get to drawing small parentheses with black squares in a 15×15 grid.

21st century vocab lesson: 60d. [Not prone to amorous feelings, for short], ARO. That’s shorthand for aromantic, roughly meaning not into falling in love or having romantic relationships. Ace is short for asexual; an ace person might be into emotional romance, just not the physical angle. Someone who’s panromantic is open to loving people of any gender expression. If you’ve wondered what the “+” is for in LGBTQIA+, well, some of these terms might fit there, along with nonbinary, genderfluid, or agender (I’m not sure how many terms fit into the “A”). (Note: I am not an expert! If I’ve screwed things up or missed important nuances, please do correct me.) 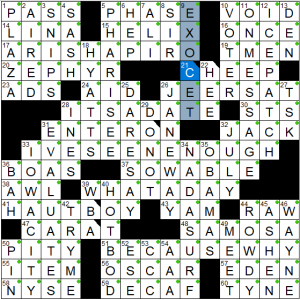 Less wide-open than the last few Mondays from BEQ, but I found this one the toughest in some time; truly a puzzle where every crossing was valuable. Let’s go right to notes: 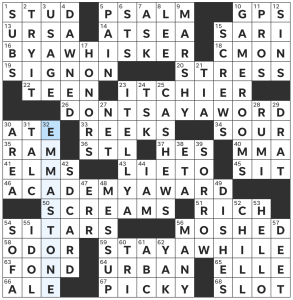 Hey folks! Today’s puzzle features four answers that have the word WAY within them, but backwards. They’re arranged in a symmetrical grid. We have BY A WHISKER, as well as DON’T SAY A WORD, ACADEMY AWARD, and STAY A WHILE. It’s cool that WAY is split up across words for all of these. I also liked the two longer down answers, GAME ROOMS and EMMA STONE. Happy Monday!