Hello from stop-and-go traffic outside of Palm Springs, thanks to my phone’s personal hotspot. While my dear husband drives, I couldn’t wait to post about today’s awesome puzzle. Let’s dive in! 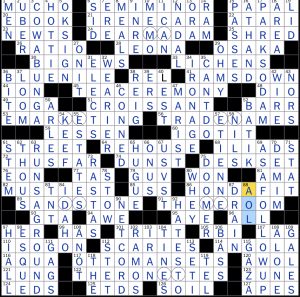 Wow! For each set of theme entries, two down entries turn inward at an angle to form / overlap with a third across entry, where their terminals (endings) connect. To construct a puzzle where everything is clean and checked both in the across and down directions is tough enough; to have a puzzle where so many of the squares are triple checked is fantastic! AND to have the connecting terminals of all those symmetrically-placed theme sets spell a perfect revealer phrase is just ::chef’s kiss:: What a joyful solve, even in spite of a few sections (especially the SW corner) that took me a little extra time to figure out. Bravo, Paolo! COWABUNGA!

Other notes:
– 20A: EBOOK [Volume on an iPad, say] – Cute!
– I loved how many women of color were highlighted in the entries of this puzzle, including LEONA Lewis, Naomi OSAKA, THE RONETTES, PARK SO-DAM, Angela BASSETT, Michelle Yeoh, and more!
– 112A: SCARIES [Sunday ___ (end-of-week anxiety, casually)] – I was glad to see this in the NYT puzzle. It feels quite validating for my Sunday night experiences!
– 88D: AOL [“Have ___ make my email stop” (Destiny’s Child lyric) – The moment I filled this in, I messaged Paolo to gush. You buggin’ what, you buggin’ who?

What did you enjoy about the puzzle? Let us know in the comments section. Until then, I hope you have a great week! 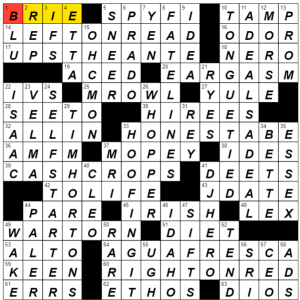 Fun paper solve this morning where it’s too cold outside for iced caps but warm enough inside to do nothing but crossword puzzles for most of the day.

It took me nearly half the solve to have my duh moment. I was looking for the theme in the theme entries, not in the clues themselves which consist of two homophones each. 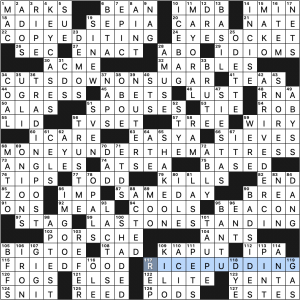 Interesting theme, and like I said, it took me a little while to catch on. But isn’t the purpose of the theme to help the solver in places where they get stuck? I’d argue that this theme doesn’t. The theme is readily apparent—once you recognize it—without solving a single word in the puzzle, and the theme clues don’t allow the solver to make any inferences about what to put in the grid. Now, if things were reversed, e.g. if a clue was [Fried food, e.g.], and the answer was FAIR FARE, then that would be a theme the solver could use, once they figured it out.

Aside from that, the fill is solid as you’d expect with highlights: ARRIVEDERCI (assuming you can spell it correctly, not like my “arrivaderci”), TRADING POST, “TRUST ME,” PORSCHE, BIG TOE, and BAD SIDES.

Solid grid, but I’m feeling like the theme should have been reversed. 3.25 stars. 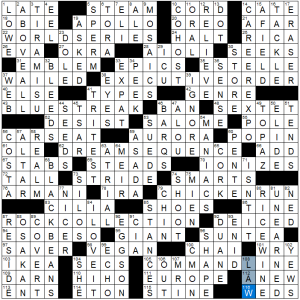 A satisfyingly in-the-language set of phrases all end in a word that suggests a list:

After WORLD SERIES and EXECUTIVE ORDER, I had hopes that each clue would be the beginning of an ordered list, but I imagine that’s just too constraining to ask for. The final three clues all do well to ensure that the first word of the entry changes meaning from the clue to the grid. Of course this is true of all the themers, but I thought [Weakling, wimp, wuss …] in particular was a nice way around something like [Leghorn, Rhode Island Red, Jersey Giant …] or something. And while I usually don’t look too closely at titles, “Set Pieces” could be a theoretical grid entry clued by [World Series, Executive Order, Blue Streak …] today.

I’m on a bit of a vacation, so will eschew notes today. Enjoy the rest of your weekend!