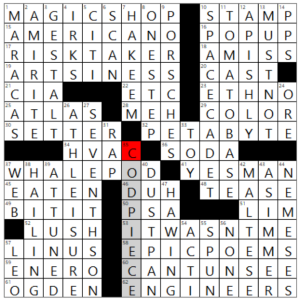 Cool grid, with those quad-stacked 9s and sort of a racetrack flow through the puzzle.

First up: Did we all laugh when [Renaissance-era cup] (“Chalice? Grail? Goblet?”) turned out to be a CODPIECE? More importantly, why aren’t athletic cups called codpieces? It’s a piece to protect your … cod.

Had no clue about [Potentially prophetic child], SEVENTH SON. Turns out to be some old woman-hating nonsense, god forbid someone wreck the magical powers by having a daughter along the way.

Fave fill: MAGIC SHOP, “IT WASN’T ME,” CAN’T UNSEE, ATHLEISURE, PORSCHES (not that I’d ever heard of the [Taycan and Macan]), SPACE CADET.

[MIT’s sports team name], ENGINEERS. But their mascot is a beaver rather than an engineer. I learned why this week, from the Netflix series Never Have I Ever: Both CalTech and MIT have beaver mascots because the animal is “nature’s engineer.” CalTech teams are the Beavers, though. 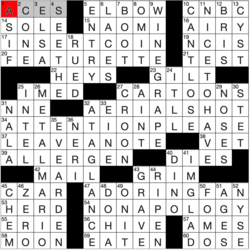 The fill makes this puzzle a delight. The clues, although there are some gems, leave something to be desired — namely, difficulty. (2:28? C’mon, it’s Saturday.) Some highlights: 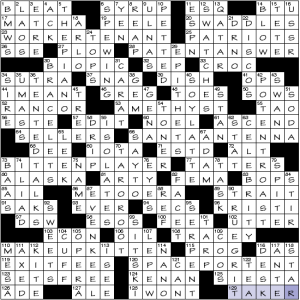 The trigram TEN is inserted, to wacky effect. 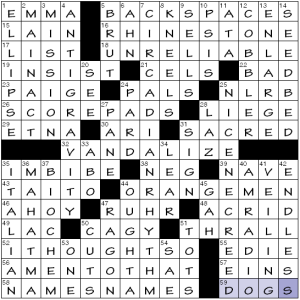 Oof, this was hard.

Don’t have much to say right now because I’m beat and I would like to make some coffee.

Brief recap: I was able to   s l o w l y   work my way through the lower right, due in no small part to a quasi-guess on 44a ORANGEMEN.

After that, I made some progress in the upper left, thanks to 1d ELLIPSE and also seeing page in the clue for 26a SCOREPADS, which led me to Satchel PAIGE for the nearby 23-across.

From there it was spotty to say the least. After quite a while I was able to get enough letters to tackle the grid-spanning 7d [It may keep you up at night] CIRCADIAN RHYTHM, although I first spent some time obsessing over something like CIRCULAR THINKING.

Taking a flyer for 47a [Bayer’s headquarters] RUHR put me in the right geographical frame of mind for 16a [Originally, a river crystal] RHINESTONE. Another olden definition at 51a [Serf of the Vikings] THRALL.

13d [General rearrangement] is a cryptic-inspired anagram clue for ENLARGE. Nowadays there’s generally one of these type in the Stumper. Sometimes it’s a hidden word.

Nickname clues are generally tough, in my opinion. 55a [Nickname like Dita] EDIE. 30a [Nickname dropping “-el” or “-anna”] ARI.

Finally, a lot of the answers that seem obvious in retrospect were extremely recalcitrant while solving. Stuff like 18a [Not at all stalwart] UNRELIABLE, 50a [Hardly forthcoming] CAGY, 32a [Trash] VANDALIZE. and so on. So yeh, a hard crossword. 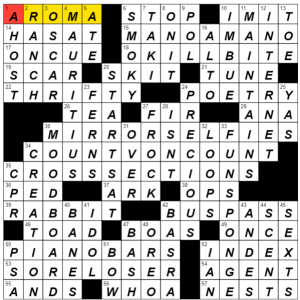 Ada is one of the best themeless constructors in the game and this grid is full of her hallmark style: ultra clean, super fresh entries, and modern takes on old standbys. I legit squealed in anticipation when I saw today’s byline. If you’re not yet a subscriber, get thee over to her Patreon as quickly as possible, at least in time for her to drop what is sure to be a banger puzzle #100. (and also her blog where puzzles are less frequent but just as fun)
(Psst… Universal team, more of this please! <3)

Ada says her original clue for COUNT VON COUNT was [“Sesame Street” character who’s doing numbers on Twitter?]. I can only assume this is a reference to @countvoncount which for *over ten years* has been just counting, one tweet per day at a time. Maybe a little too much of a deep cut for a Universal puzzle but funny and original all the same. 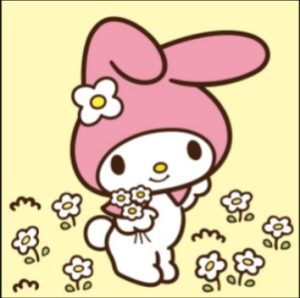