Theme: Each theme answer is a character with distinctive ears. 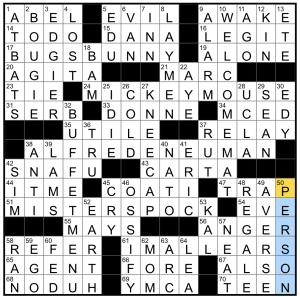 First and foremost, congrats to Caryn on her New York Times debut!

While solving this puzzle, I wasn’t sure what the connecting thread was going to be. BUGS BUNNY and MICKEY MOUSE… maybe something cartoon related? But then I got ALFRED E NEUMAN and was totally lost. (Side note, it was lucky for me that we had a NYT puzzle last month that featured ALFRED E NEUMAN, because his name would have been much more tricky for me to come up with without it). I eventually got to the revealer and, yep, these guys all do have big ears – I think? Are MISTER SPOCK’s ears particularly big or just pointy? I haven’t seen Star Trek. Anyway, it was a satisfying reveal, if a little one-note and pop-culture heavy. Could there have been more wordplay with the theme, I wonder? I went to a corn maze this weekend – that’s technically “all ears” as well, right?

The fill is generally smooth. I didn’t feel like I was moving through the puzzle particularly quickly, but I ended with a below average time, so what do I know? Highlights were WELCOME MAT, IT ME and BOUGIE (even with its oddly worded clue), lowlights were LAMS, COATI, and KAL Kan (my crossword dog food brain can only accommodate Iams and Alpo, sorry). This puzzle is also pretty male-dominant: besides that all four theme answers are male, there’s also DANA Carvey, SEAN Connery, MARC Anthony, ERIC Holder, TRU Capote, Joseph EDY, John DONNE, and Willy MAYS. For women, we have the biblical EVE and MOM clued via tattoo.

Favorite clues today: 65a [Mocking retort to Captain Obvious] for NO DUH, [Jarring noise at 6 a.m.] for ALARM, and 69a [Village People classic with a pantomimed chorus] for YMCA!

Well, this is new. Two debuts for the price of one. Congrats to both of our constructors.

They bring us a gymnastics-based puzzle with a lovely title. Each theme entry is a familiar phrase whose final word can also be an apparatus in gymnastics. 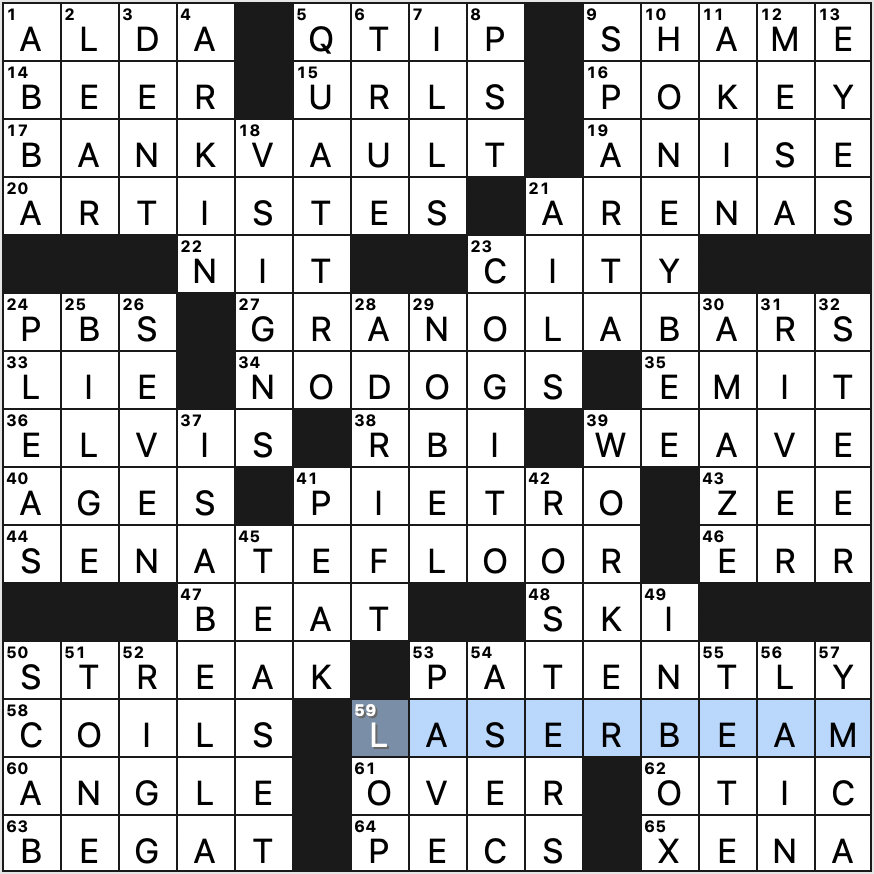 Pretty straightforward, so quite apt for a Monday, and it gets the job done. I wouldn’t have minded, though, if other gymnasts got some love here as well. Crossworders certainly know Aly Raisman, and Sunisa Lee won the all-around gold last time around. And there isn’t anything here that precludes the use of older gymnasts. Absolutely nothing against Simone Biles, but I found it odd that only her name appears here.

Top fill includes HONEYBEE, ARTISTES, and ISABELLA of Spain. Knowing some Italian would come in handy for QUATTRO and PIETRO, but the crossings helped if you didn’t. I liked the crossing of two Alans (ALDA and ARKIN), but there may be younger solvers who don’t know an A goes in that spot.

The rest of the grid felt solid with straightforward clues. 3.5 stars.

Good morning folks! Today’s puzzle features three entries whose first word is a card in the game Uno. I haven’t played Uno in… probably a decade? But the card names are familiar to me. We have WILD GOOSE CHASE, SKIP INTRO (my favorite of the themies) and REVERSE COMMUTE. 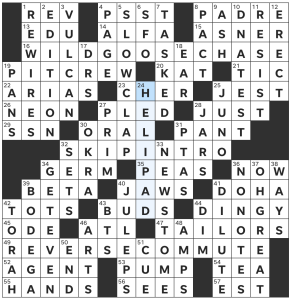 Rebecca also gave us some fun long answers. I like SLOW CLAP, NEWS TO ME, and NO NOTES the best. More thoughts below: 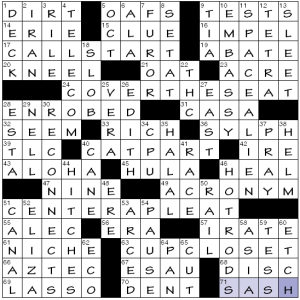 The original phrases have been wackified by being ENROBED (28a) by the letters CT, the two-letter abbreviation for Connecticut. 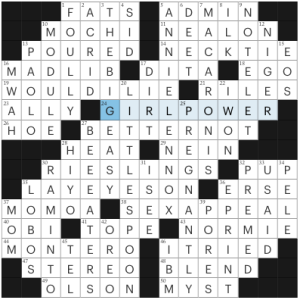 Tough one for me this week, though nothing was really vexing. Cost myself some time by having —NIEL— for the singer and making it DANIEL instead of ANNIE LENNOX. Oops. Don’t recognize the song title.

Fave fill: MOCHI (though the clue, [Hishi ___ (treat served on the holiday Hinamatsuri)], was challenging for me), MAD-LIB (the singular is bogus but it’s the second time I’ve seen the entry lately and I always got a kick out of Mad-Libs), “WOULD I LIE?”, GIRL POWER, “BETTER NOT,” tasty RIESLINGS, “MONTERO” (which is Lil Nas X’s given name, Montero Lamar Hill), MWAH, THE BIG EASY (fiendishly the same letter count as NEW ORLEANS, but I had that first T so didn’t fall for the trap), LITTLE SPOON, and EPRINT (lots of the covid-related medical journal articles I see are eprints, pre-publication).

Four stars from me, lots of fun stuff here. 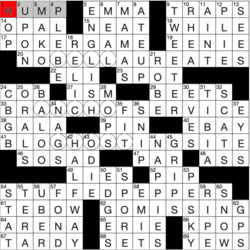 Sorry, not much time to do much more than explain the theme, which is revealed at 54A [Tex-Mex fare found with increasing spiciness in this puzzle’s circled letters?], STUFFED PEPPERS. The circled letters in each theme answer are a type of pepper, starting with the totally unspicy BELL at 20A, moving down to the hotter but not super-hot ANCHO at 33A, and the sear-your-mouth GHOST at 41A:

Quibble: It feels like the PEPPERS are the stuffing, rather than being stuffed, since the circled letters are in the interior of the themers rather than a phrase like GRAFT VERSUS HOST, in which GHOST is “stuffed” with other letters. I guess you could argue that the peppers are “stuffed” into their phrases, but I think the revealer would’ve been more appropriate the other way.