This week we’re looking for something you might call a trucker. The center entry (TENFOUR, clued as “Message received,” to a trucker) was clearly thematic. There were no obvious theme entries beyond that, other than the two long acrosses (which were ten letters long). I tried to apply 10-4 to them (taking the 10th and 4th letters), which lead nowhere. I overcomplicated things and researched trucker 10 codes. I figured they were a bit of a stretch as the basis for a meta, but I had fun learning about them. I slept on it, woke up, and tried applying 10-4 to various places in the grid. Wrong rabbit hole, but I stumbled into the right one when I spotted “Detraining site” (which struck me as an odd clue for EXIT the day before), and realized the clue had a 10-letter word followed by a four-letter word. Fifteen other clues followed the same pattern: 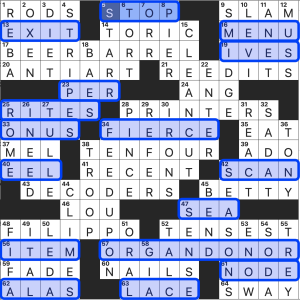 The first letter of the theme entries spell SEMIPROFESSIONAL, our contest solution. Note to self: when the grid yields no signal: check the notes. I did so fairly quickly, but not closely enough. Solvers: let me know how you made out.