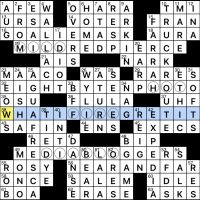 Hello everyone! This week’s puzzle brings the spice with a Taco Bell sauce packet theme! Each theme entry contains a sauce, in increasing heat level.

Common utensils are found backwards within familiar(ish) phrases. The revealer is SETTING BACK (62a, [Delaying, and a hint to the circled letters]). 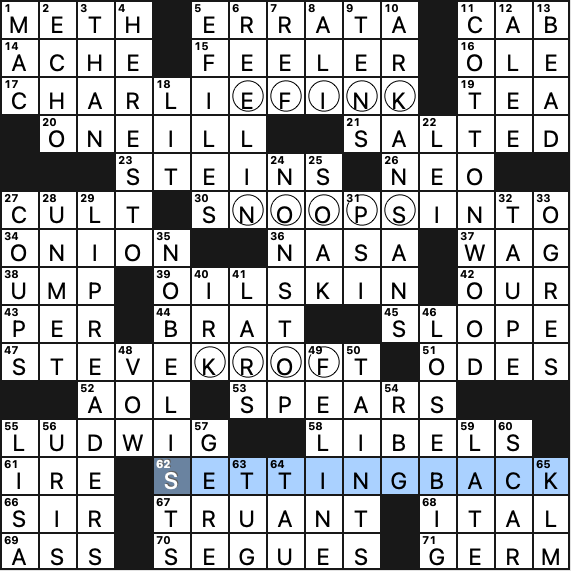 I rather liked the fill better with COTTONWOOD, LIP READERS, NOBELISTS, ARKANSANS, OILSKIN, and LOSE BIG. 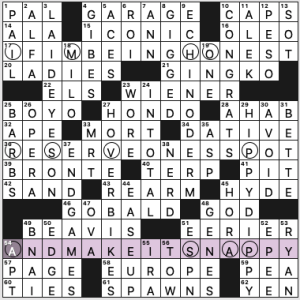 Four-letter abbreviations are sort of illustrated by 15-letter phrases that contain those four letters in order (circled/shaded):

Would’ve been cooler if all three were spoken phrases—a “ONE’S” phrase is markedly less zippy than the other two themers.

Are HOVERBIKES really [Futuristic modes of transport] that people think of? The BIKES portion made me work for it. 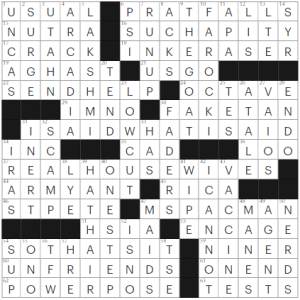 This was noticeably tougher for me than recent Tuesday New Yorker offerings, but in truth I was never stymied for long. So let’s call it moderate pushback, but … 17a [Succumb to pressure] CRACK.

The grid is unusual that it has two 14-letter entries framing the center, and the central across entry is a small three-letter entry is flanked by black blocks of equal size. Anchoring the corners are triple nine-stacks and five-by-five squares.