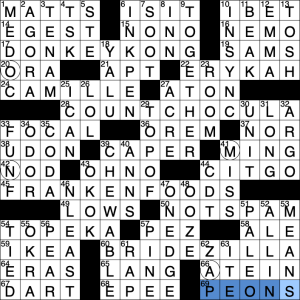 hello and welcome to episode #750 of matt gaffney’s weekly crossword contest, “Monster Match”. first of all, thanks to matt for filling in for me last week while i was not, in fact, waterskiing on lake manitoba—i just spaced out and forgot to blog the puzzle. my apologies! anyway, i’m back for this halloween-appropriate week 2 puzzle, in which matt challenges us to name a sound heard in horror movies. okay, what are the theme answers? the four longest across answers answers each evoke (and share part of the name of) a famous monster:

i might as well say up front that based on just the instructions and the number of theme answers (four), MOAN is already a very strong candidate. but let’s continue. the title suggests that we match up the monsters. it turns out that the part of the original monster’s name that does not appear in each theme answer does show up elsewhere in the grid, except with one letter (the first letter, in each case) changed:

taking these changed letters in order spells out MOAN, so yes, that is the answer.

i thought this puzzle was great. it felt easy enough for a week 1; i suppose there is one more step than last week’s actual week 1 meta, in the sense that you had to search the fill for the extra words suggested by the meta mechanism, whereas for last week’s puzzle you merely had to read off the first letters of the extra words themselves. at any rate, the mechanism still felt fresh, original, and entertaining despite being both easy and seasonally appropriate. two thumbs up from me.

clues and fill that caught my eye: