Today’s long theme answers consist of words that have a related word hidden within and identified by circles. The clues all feature sets of question marks which should be replaced with the circled words. 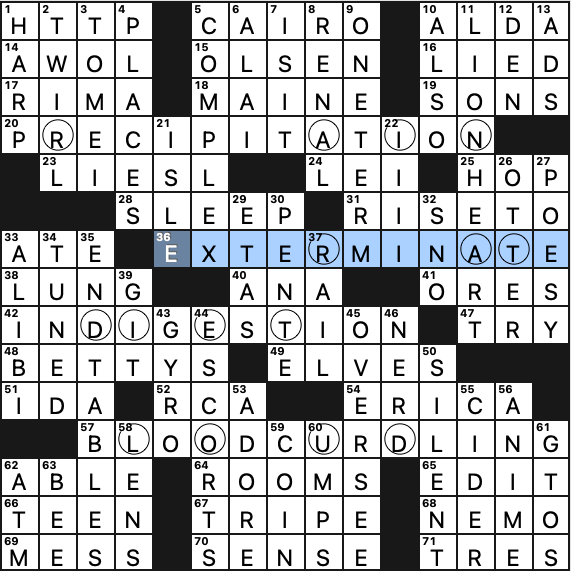 Pretty nifty theme. I don’t know how one goes about trying to find words that fit this theme, other than poring through lists of potential candidates, so kudos to our constructor for putting together a nice set. I wonder what other entries were left on the cutting room floor. Can you think of other examples?

Nice long fill with Richard the LIONHEART and ENDTABLES topping things. New-to-me are RIMA [Terza ___ (verse form)] and PENTE [Board game akin to go], but the crossings were all fair (assuming the solver knows Marisa TOMEI). 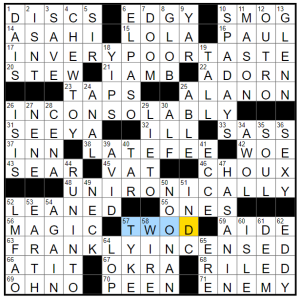 Cute theme, with Tom Swifties that are all fresh to me:

Funnier than many prior Tom Swifty themes, if you ask me.

Not crazy about the entry, but it makes me nostalgic: 51D. [Visiting the Natl. Museum of African American History and Culture, say], IN D.C.

Please, no, this is terrible: TWO-D. I like to pronounce it twod, rhymes with clod. 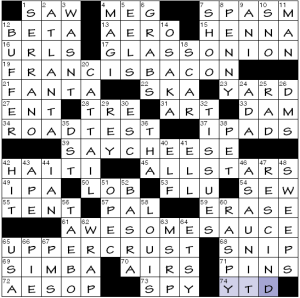 I solved without referring to the title, so I could see that they all contained foods, but not what they specifically had in common. Sandwich ingredients, perhaps? But the title cleared things up immediately.

BACON seems less traditional than the other ones, CRUST isn’t a topping but is certainly a main component of pizza. Minor points.

That’s all I’ve got.

You literally can’t lose (or technically win) today with this puzzle! We’re just playing to have fun! 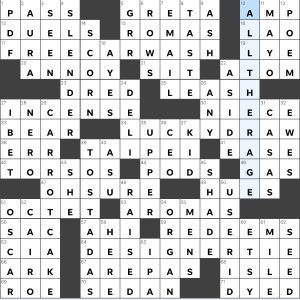 Theme: each themer ends with a synonym for “No-Win” outcomes

FREECARWASH took me a bit of time to complete, as I had the first word right away but kept thinking “rides” or “cab fare” for some reason but from it, we get WASH. I needed all the crossings for LUCKYDRAW which instead of a win I do get a DRAW. For DESIGNERTIE I had the last word of TIE right away but it took a few crossings to fill in the rest. All in all, a fun set with a great title hint.

Even though I didn’t get truly stuck anywhere, my time was still a bit higher as I had to pick my way through the grid while making steady progress. Feels very apt for today’s theme! 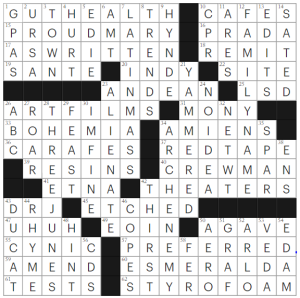 Quick ‘n easy, but tomorrow’s will be even easier. I like how the New Yorker does indeed calibrate the easier and easiest themelesses’ clues to the promised difficulty level. I mean, I prefer a tough themeless myself, but themelesses are my fave and I want all solvers to embrace them, even if the Fri/Sat NYT puzzles are too daunting. Wed/Thurs TNY are typically a good bit easier than the Fri NYT!

Jarring to see GUT HEALTH parked at 1a, but honestly, who can complain? GUT HEALTH is a good thing if you’re able to have it.

Never heard of 28d. [Début novel for which Julia Glass won the 2002 National Book Award], THREE JUNES. If you’ve read it, did you enjoy it? And isn’t it quaint that the New Yorker insists on that accent in debut? 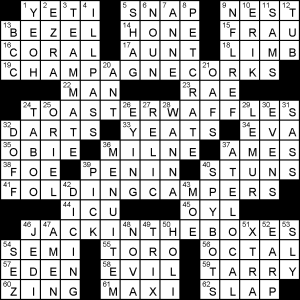 Doug Peterson & Christina Iverson’s give us a list theme of things that “pop-up” with the twist of envisaging them as items in a “pop-up store”. I suppose you can buy CHAMPAGNECORKS sans bottles, and the rest of the set are TOASTERWAFFLES, FOLDINGCAMPERS and JACKINTHEBOXES (jacks-in-the-box?). 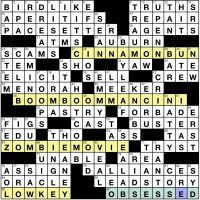 I am LOW KEY OBSESSED with this week’s AVCX Classic 3.5/5 difficulty from Karen Lurie

This is my absolute favorite type of theme. The type where as I’m solving I have no idea what the relationship between the themed answers is, only to find the most perfect revealer at the end of the puzzle.

And here’s the Warren Zevon song about BOOM BOOM MANCINI