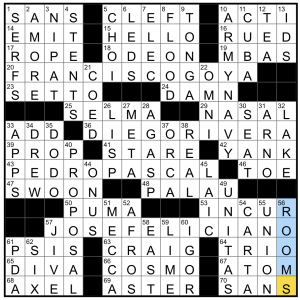 So, in a nutshell, each theme answer first name can follow the word SAN in the name of a famous place: San FRANCISCO, San DIEGO, San PEDRO, and San JOSE. I’m not exactly sure what the point of having two SANS revealers were? It seems like the reveal clue could be something like [French for “without”… or what could precede the first names of the other theme answers]. I spent a while trying to figure out if the double SANS actually added another layer, and honestly I’m still not sure. Let me know in the comments if I’m missing anything.

I think how difficult this will play for folks will depend on their knowledge of the four men in the theme answers. I knew all but JOSE FELICIANO, but my non-crossword friend sitting next to me while I solved knew him immediately, so I think that one’s just a personal blind spot for me. It’s always tricky to do a Monday puzzle based around proper names, but these ones span a pretty wide swath of pop culture, which helps with that issue (although after FRANCISCO GOYA and DIEGO RIVERA I did think we were heading towards an art theme).

I don’t have too many comments on the rest of the puzzle. The clue [Question that might have a ring to it?] for PROPOSAL was cute. I wrote in 67a [Elementary building block] as “lego” before ATOM. The CHOI/ODEON crossing could play a little tricky for newer to crossword folks, but there are only so many letters that could fit there. There also feels like there are a lot of men in the puzzle, and although some of that is theme-related I think the fill could have been more balanced (the only women mentioned are Juliet and Frida Kahlo, both of whom are only mentioned in relation to men). But overall, a solid Monday puzzle with a theme I enjoyed figuring out.

Congrats to Joe on a great NYT debut!

Theme entries are familiar phrases whose final words can also be activities that take place in an office setting. 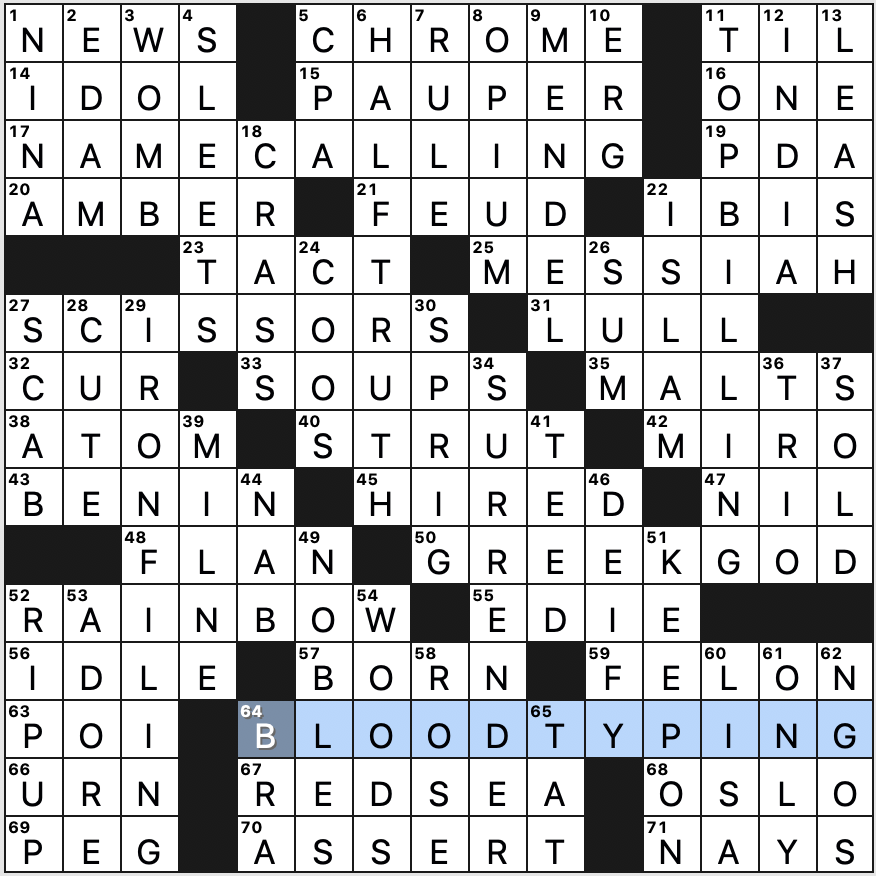 About as straightforward a theme as they come, but that’s apt for a Monday as is the back-to-work motif (though it feels a tad depressing).

What’s most notable here is the cleanliness of the grid. Yes, only four theme answers placed in a pinwheel formation reduces the amount of restrictions on a constructor, but it still makes for a clean, flowing grid which is fun to fill, and gives new solvers a good shot at completing the puzzle. Highlights include GREEK GOD, MESSIAH, RAINBOW, SCISSORS, HALF-TRUTH, and SURRENDER. Tough-for-Monday fill includes proper names MENDEL, MIRO, and BENIN, but at least they aren’t obscure crosswordese.

Clues of note: 52d [Tear to shreds] followed immediately by 53d [Love to pieces]. Those clues themselves could be the start of a puzzle theme themselves if a couple more similar phrases could be found. 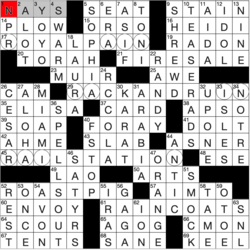 Appropriate for fall (although perhaps not in Los Angeles itself!), this puzzle’s theme is revealed at 61A [Wet-weather gear, and what this puzzle’s circled letters literally are?], which is RAINCOATS. That is, each theme entry is “wearing” a COAT of the letters RAIN, split differently each time:

As a constructor, I appreciate that the split in RAIN moves from left to right as you move down the puzzle, and also that the clues for each theme answer are just two words long, which is a nice indication that the phrases are very much in the language and don’t require clue contortions to make them work.

The grid is fine and smooth, and I appreciate any reference to Clueless (in this case ELISA Donovan at 35A). 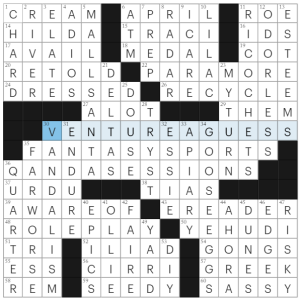 Whoa. A 4:17 finish means this felt more like a Wednesday New Yorker to me, much easier than I was anticipating. Smooth solve, at any rate.

Fave fill: VENTURE A GUESS (which is what we do many times while solving a crossword), FANTASY SPORTS (mildly misleading clue, [Team-building activity]), ROLE-PLAY, Wikipedia VANDALISM, “MY TURN!”, GOOSE EGGS.

Nice feint: 43a. [Literary device?], E-READER. Not a trope, symbolism, etc. Could have dispensed with the question mark for a MonTNY puzzle. 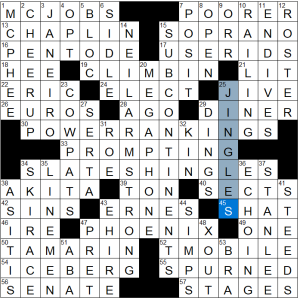 Somewhat rushed today after a busy workday — I found this gentler than most BEQ Mondays, particularly in that there isn’t one or two more obscure entries making an open corner work. Maaaaaybe PENTODE and COWPATS, but I’ve heard both, if many other alternatives for the latter. Cow Pie Bingo is a good time, though!

Somewhat surprising, but I’m not complaining to see Portuguese Dezembro in a clue intersecting another clue that references Portugal. POWER RANKINGS and NEIL ARMSTRONG are highlights of an interlocked center; I quite liked SUBCONTINENTS and SLATE SHINGLES as well. I missed SHAT [45a Eliminated waste] during the solve, feels like BEQ might’ve pulled a punch or two there. I have seen AKITAs in other places, but it always puts songs from Rent in my head.

Never a fan of SOPRANO (or BASS) being clued as “always high” (or low) – there’s plenty of range in any person’s voice and in most songs. I’ve never dug into DINER lingo, and I had to look up “eve with a lid on” — seems it’s apple pie. I can see it.