Huge thanks to Amy for getting a Sunday post up when life got in the way for me. Tremendously appreciated! Rightfully so, my post will be a sort of “To Be Continued” of hers… 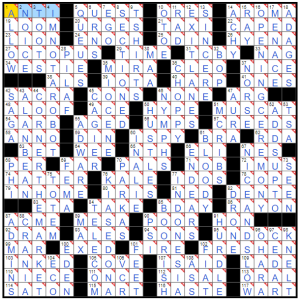 Each of these puzzles theme entries is broken up into three- to five-letter words (with seemingly unrelated clues) who stand on their own right, but who spell out a larger theme answer (and relevant clue) after you combine the entries (and clues) reading across. Ignore the black squares separating those smaller words to get to the larger answer. That said, I need help understanding the revealer. Which lines are we supposed to be reading between? If the black squares are the lines, aren’t we reading around them instead of between them? I feel like I’m missing something obvious here, so please help! (The constructors’ own notes at xwordinfo also seem to voice skepticism about seeing the black squares as lines, so I’m struggling to figure out how solvers are supposed to buy into an interpretation of the all-important revealer that the constructors themselves aren’t fully sold on?)

Overall, my sense in solving this (and in checking out the online reaction to this puzzle) was that this felt like a frustrating solve (so much short, choppy fill accompanied by short, choppy clues, a grid without much flow between sections) until the aha! moment. From there, many solvers’ opinion on the puzzle did a 180, becoming one they quite enjoyed. Others (myself included?) ended up maybe more torn on whether the juice was worth the squeeze.

I think what keeps me fully from the first group is that many of the non-theme related sections of the puzzle also felt heavy on short, choppy clues, which made it hard to get footholds. Also, the first few sections of the grid were weirdly tough for me, perhaps because of the Arachne, ENOCH, ODIN, “Aeneid,” “Iliad” region paired with outside the box (but fun!) clues for entries like TSHIRTS, OCTOPUS, and TAXI that made it hard for me to plunk in any entries. I guess I wish there’d been more variety and stretch in the non-theme clues to balance out the themed sections of the puzzle, but I know there’ll be plenty who don’t agree. I’m glad at the very least that this puzzle will get folks talking, and we can hopefully agree that the themed sections at least were a pretty nice payoff.

My only two ooooofs of the puzzle were NAG (which strikes me as quite gendered) and the incredibly awful radio personality Don IMUS. IMUS / SEEN could have easily been changed to IM UP / PEEN, so it’s baffling to me why he was left in given how much damage he did over his professional career. On the other side, my favorite clue is almost certainly [Xmas, for Justin Trudeau] for BDAY – super cute.

Amy’s original review: Theme revealer is 63A through 67A: [Read] [Here] [To] [Understand] [23 answers in today’s puzzle that don’t seem to match their clues], BET WEE NTH ELI NES, or between the lines. The first three Across answers in row 1, for instance, are ANTI QUEST ORES, [Shops] [Peddling] [Collectibles], or antique stores. No idea where the rest of the themers are, as I revealed the solution and didn’t do the puzzle. (It’s bedtime and I wanted to get the post up for the gang! Thank you to Caitlin Lovinger at Wordplay for pointing me towards the theme.) Looks funky, hope you enjoyed it!–Amy

I do enjoy when a puzzle breaks a rule to good effect. In this case, we have a central entry unchecked by any crossing entries. It’s clued simply [(CONFIDENTIAL MATERIAL)], but what does that mean? 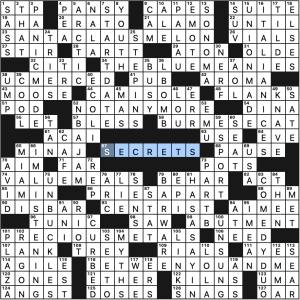 My first thought—even before I saw the clue—was that that central entry sure looks like an Oreo cookie, albeit with some extra nubbins. But there’s nary an Oreo in this grid. I had no idea what was going to go in the middle until I got to the revealer at 116a BETWEEN YOU AND ME [“Confidentially …,” and a phonetic hint to where a letter of 67-Across is located in each starred clue’s answer]. AHA! So, we look to the starred clues’ answers, look for a U and a ME, and see what’s between them. 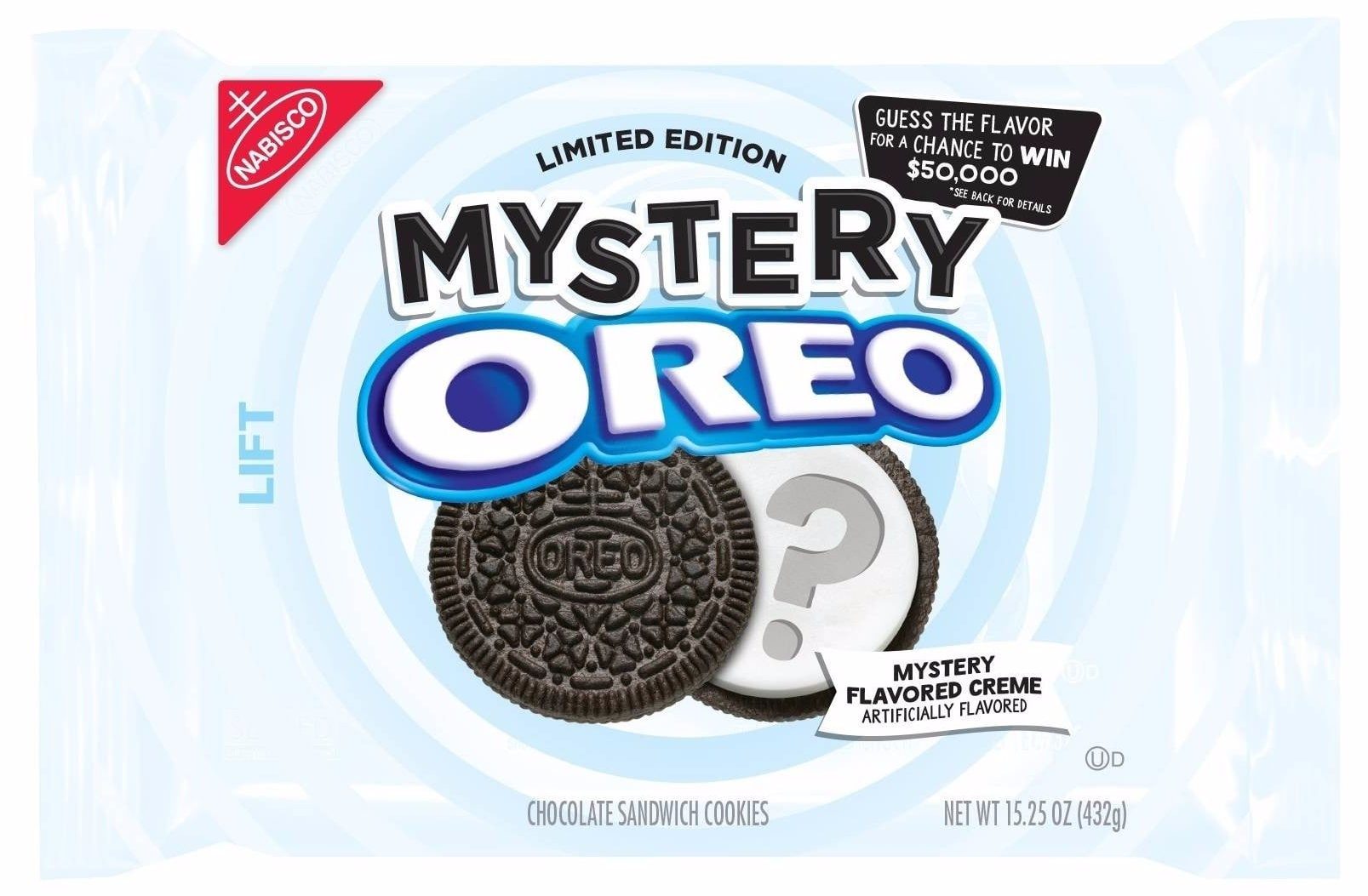 Very impressive. As I said, I was in the dark for the entire solve and I even got the revealer through crossings and not via the clue, so I had to purposefully read the clue and then go back and find the missing letters. I didn’t mind because this was such an impressive theme expertly executed. (I still wanted it to be about Oreos though.)

Theme: Each theme answer begins with Z and ends with A, going from the last letter of the alphabet to the first. 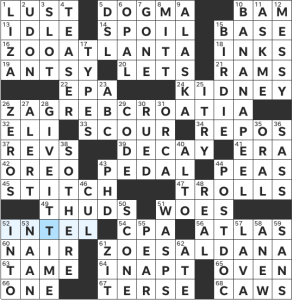 This was a really fun theme, and it was useful as I was filling in ZAGREB, CROATIA since I wouldn’t say that geography is an area that I excel (but this was a great review, especially since I learned that ALASKA is the 9d [“Only U.S. state whose name can be typed on one row of a keyboard”]!). I got ZOO filled in first in ZOO ATLANTA and then came back after filling in enough off the crosses to get the city. In retrospect, this felt really obvious. ZOE SALDANA was an easy get for me, especially since the new Avatar is coming out and I’d recently be thinking about how she returned for the second (and might for the third?).

It’s fun to see the number of Zs in this puzzle as a result of the theme. It also appears in 1d [“Nickname for Elizabeth”] LIZA (though I had BETH for a bit at first). ZEROS was a fun answer in 26d [“Six in 1,000,000”]. I also thought that 10d [“Ingredient in some vegan bacon”] BANANA PEEL was interesting. I definitely want to try making some myself (I’m going to use this recipe, if you’re interested).

Overall, a great Sunday solve. I’m keeping it short since I’m at my parents’ today, but I hope y’all have a good week! 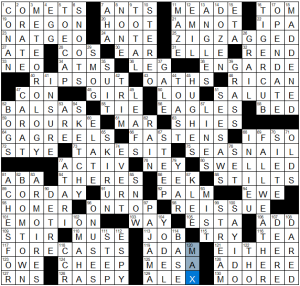 It’s sunny where I am today, but Evan brings us a precipitation-themed grid this week. We’ve got two revealers…

And a series of starred clues that don’t quite make sense while intersecting down clues refer to 69d:

We also have a few theme-related entries fleshing out the grid:

An intricate theme with gentle cluing and two revealers, as well as some bonus answers make for a friendly grid. The theme demanded a relatively tight passage through the middle of the grid, and the resultant long acrosses on the left and right sides of the grid are an unusual place for bonus answers in a 21x. 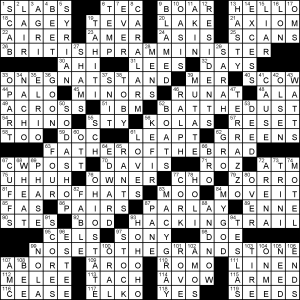 “I Needed a Change” is the type of theme that is popular in Sundays. The sound “aɪ” in eight entries is altered to “æ”. Spelling changes as needed. This kind of theme has a vast number of options, so you can make a Sunday set while still choosing some pearlers. Today we have: