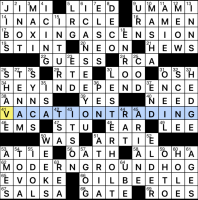 Hello everyone! Hope you’re all doing well. The fall season includes holidays from a lot of religions and cultures. Matt’s grid this week is no different, as it includes pairs of different days, both holiday and otherwise.

Thanks for reading. Until next week!

Today we have a debut puzzle all about…stairs. Each theme answer is a familiar phrase featuring a word that can also have something to do with stairs. 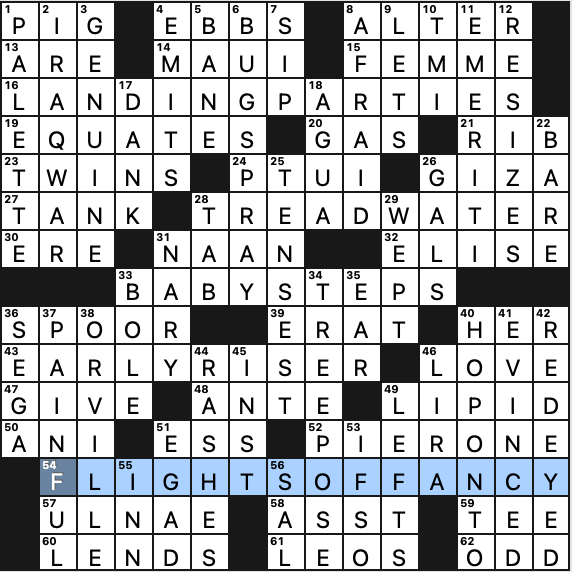 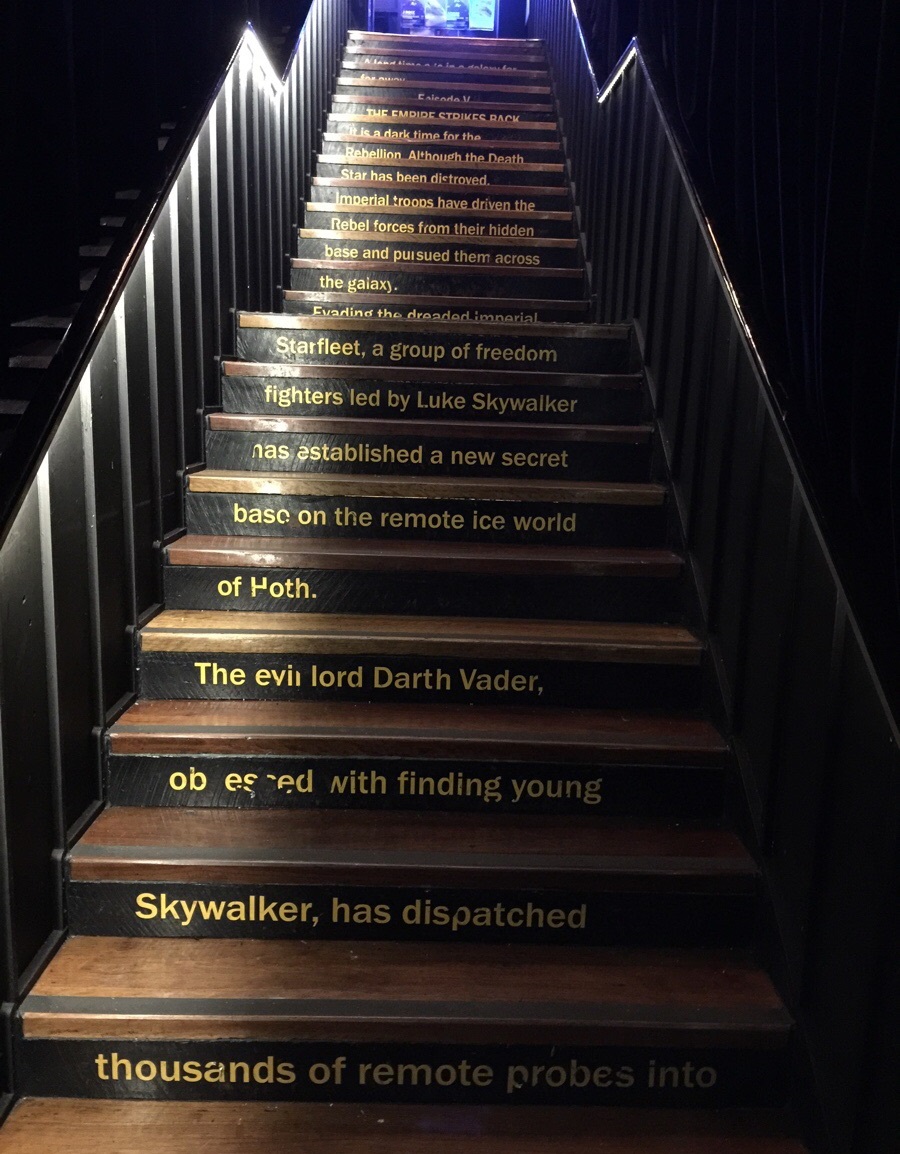 Not bad. I never considered that anyone would make a theme about stairs, but it works. There are even some stairway-looking black squares in the grid, so that’s a nice visual bonus.

Interesting configuration with the 14-letter entries in the 3rd and 13th rows causing the sets of blocks in the NE and SW corners. But it does allow for some separation between theme answers thereby reducing the constraints on the fill, most of which was quite good. Highlights include TREE POSE, BUG SPRAY, RED-EYED, ORVILLE, IRAQ WAR, and PIER ONE. 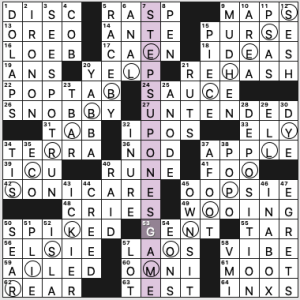 Theme revealer: 7d. [Improves to meet a challenge … or a hint to this puzzle’s circled letters], STEPS UP ONE’S GAME. The circled squares stair-step upwards to spell SCRABBLE, RISK, CHESS, and MONOPOLY. Aside from that Down 15, I believe the rest of the Acrosses and Downs are just fill, nothing thematic.

I may have called out to my husband when I hit TAB right near POP TAB. Duplication foul! OOPSIE?

Editor:  Erik Agard
Theme: Each theme answer is two words. The first starts with G and the second starts with J. 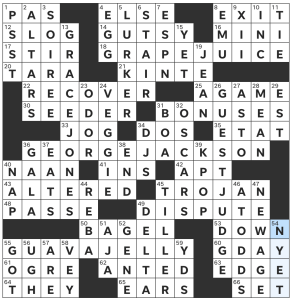 I’m not 100% sure why these two letters were chosen for the theme. I googled the letters “gj” to see if this title was a reference to something I didn’t know – the things that came up were a BABYMETAL song and an abbreviation for “good job”. It’s probably the latter, but I have a close friend whose last name starts with the letters Gj, so I liked the theme because it reminded me of her.

Whatever the reason was, I liked this puzzle much more that most “phrases that start with the same letters” puzzles. All of the theme answers were great choices and felt distinct from each other. I didn’t know GEORGE JACKSON, but as soon as I saw where the theme was going I dropped in GRACE JONES no problem. It was fun seeing theme answers in both the across and down directions; I feel like we don’t get that from USA Today that often.

The rest of the puzzle played very easy to me – I didn’t feel like I was moving particularly fast, and I still almost broke 3 minutes which is rare for me. I think it’s because the grid overall was so smooth and there were not many proper names aside from the theme answers. Because of the 5 theme answers, there weren’t too many standout fill entries (LURKER, VEGGIE, and KPOP were my faves), but again! 5 theme answers! Including 5 Js! It’s quite a feat to get the grid so smooth with those constraints, and it really paid off – I had such a fun time solving this puzzle.

This was a smooth solve. As I filled in the theme answers I felt like I was playing the last round of the old game show “$25,000 Pyramid.” Want to play along? 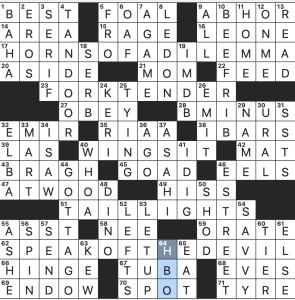 Solid, accessible Tuesday puzzle with a fun revealer. Five theme answers including the revealer makes for a lot of theme material in a 15×15 and I don’t think the fill suffered.

That’s all the time we have for today! I’ll leave you with what I didn’t know before I solved this puzzle: that KERI Russell appears in “The Americans.” 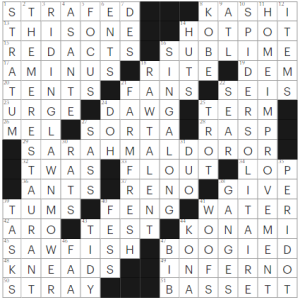 I’m back from a mini bout of travelling—apologies for not securing adequate crossword coverage while I was away.

This was a relatively well-integrated grid, although not being familiar with the central marquee entry was a minor impediment to breaking into the righthand section of the puzzle. More on that later.

Firmly anchoring the grid are stacked vertical pairs of 15-letter entries, all quite good: 2d [The America Girl Café, for one] THEME RESTAURANT; 3d [Vehicle that might take several minutes to cover one yard?] RIDING LAWNMOWER (watch The Straight Story (1999)!),;10d [Card game with eight foundational piles] SPIDER SOLITAIRE—hence the name, I now see; 11d [Process that increases the value of quarters] HOME IMPROVEMENT, made trickier because the clue lacks the optional question mark. 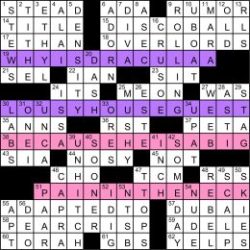 Good morning, people! I hope you’re doing well and preparing yourself for all the trick-or-treaters that will be roaming the streets very, very soon!

I’m sure a good number of those getting in the Halloween spirit will be dressed as the Transylvanian vampire, and today’s puzzle gives him a shoutout in a riddle.

I have never had a PEAR CRISP before, but it sounds as delicious as it looks appearing in the grid (58A: [Crumbly fall dessert made with Boscs or Bartletts]). The entry was just one of a few awesome 9-letter entries in those stacks in the northeast and southwest, including DISCO BALL (15A: [Mirrored orb at a dance party]) lying on top of OVERLORDS (18A: [Feudal bosses]). Seeing TCM reminded me to make sure to head to that channel soon, as I’m sure they’re going to have another Halloween-type marathon of movies, probably heavy on Vincent Price flicks, that I want to catch again (47A: [Airer of timeless films, briefly]). Like the Halloween-themed touch to the clues to TITLE (14A: [“Halloween” or “Scream,” e.g.]) and IAN as well (22A: [“E’gad, Zombies!” narrator McKellen]). I would say to you that I hope you enjoy spooky season, but, like I few fanatics who I know, I’m sure some of you have been enjoying since the calendar flipped to October 1! I’m sure one of my neighbors put up their decorations on Oct. 1 or Oct. 2.

“Sports will make you smarter” moment of the day: WEEB (27D: [Coach Ewbank]) – This New York Jets fan is absolutely giddy about their 5-2 start to the season, so seeing the greatest coach in their history be included in the grid is perfect timing. Weeb Ewbank was the head coach who led the Jets to their upset victory over the heavily-favored Baltimore Colts in Super Bowl III, one of the seminal moments in the history of the league as the NFL was preparing to merge with its rival, the American Football League, a few months after that game in Miami. Funny enough, Ewbank led the Colts to two NFL championships one decade earlier, in 1958 and 1959, and was also the head coach in a game that also had a long-lasting impact on the game of football. The 1958 championship game against the New York Giants, a 23-17 overtime victory, was viewed by an estimated 45 million people in the US, the catalyst in pro football’s popularity surge that eventually led to the sport becoming the most popular one in the country, a designation that definitely stands to this day.