The letters in JOB are found scrambled in various phrases. The revealer is ODD JOB (44d, [Miscellaneous household task, and what’s found in each set of circles]). 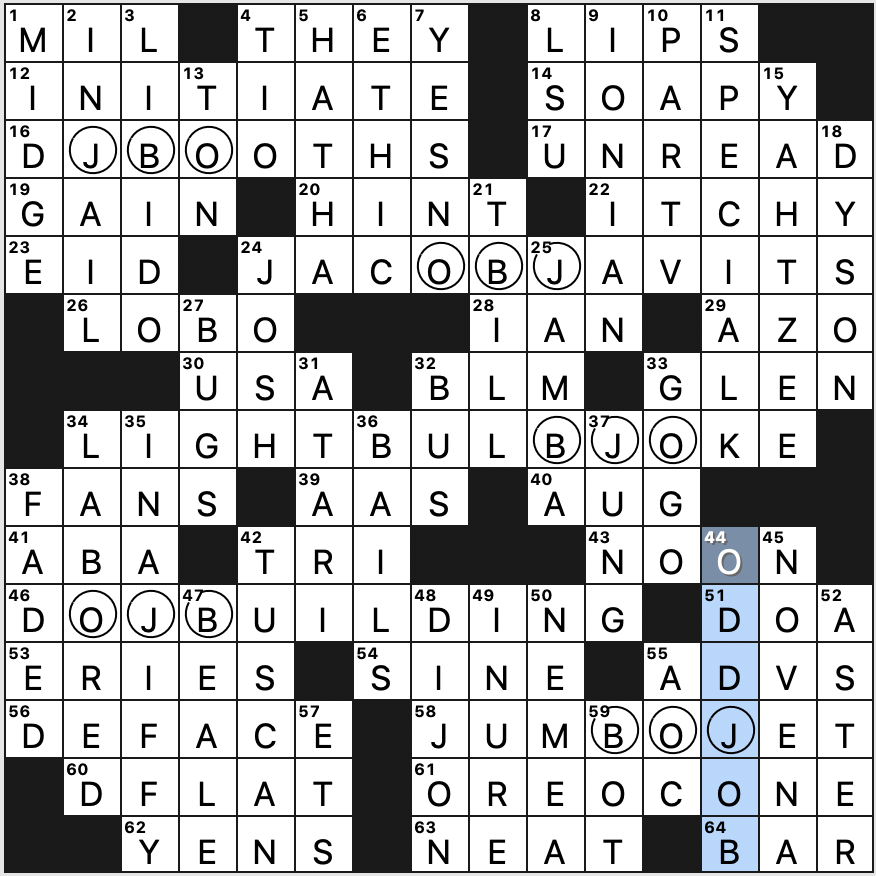 Granted, trying to find familiar phrases that anagram the letters JOB is never going to be easy, but as a solver, I still wanted the phrases to be more in-the-language than what we got. Only the last feels familiar and natural. The rest seem forced or on the obscure side.

Also, I’m not convinced that “odd” translates into “anagram.” If the revealer was CHANGE JOBS, that would make more sense to me. 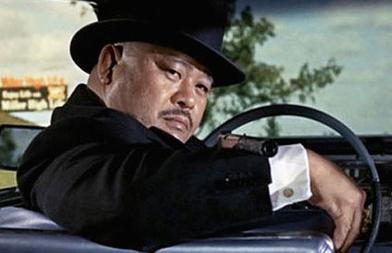 Lastly, I’m okay with the revealer’s clue, but it seems odd (haha) in the singular. Don’t people normally talk about odd jobs in the plural? I’d have been perfectly content with a clue referring to the iconic Bond villain.

SPECIAL K, OREO CONE, and IN A JIFFY top the fill, along with LIBIDO and YAHTZEE. I did get a sense that there was a higher than average amount of crosswordese: AZO, AAS, ADVS, DOA, ETS. But I wouldn’t be surprised if that was the result of the constraints of the theme.

I recognize this was a tough theme to build from a constructor’s standpoint. In this case, that resulted in a less enjoyable solve. Three stars.

Side note: I’ve been doing shorter write-ups for over a month because sciatica mostly kept me from an easier solving/blogging setup at my desk, but I am hopeful that I’ll be back at my desk for a good, long while now (thank you to skilled doctors at a major hospital close to home, and the insurance to access them). Headachy all day, though, so a quicker recap tonight. 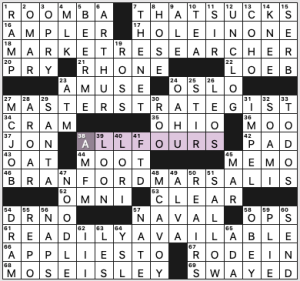 Fun quasi-rebus theme, with the original meaning of rebus rather than the “multiple letters in a crossword square” sense.

Fave fill: “THAT SUCKS,” Star Wars MOS EISLEY (when a pop culture reference is 45 years old, it would seem churlish to complain about it … though when I was doing crosswords as a teen in the 1980s, certainly 1940s pop culture references seemed hardly fair play for anyone but a much older solver!).

Please use 16a AMPLER in a natural-sounding sentence. 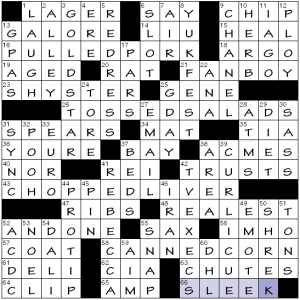 This is a very tidy little theme. Menu items that can all be reparsed as being somehow removed, by virtue of their adjectives being synonyms for ‘junked’ or eliminated.

Not part of the theme and not what I sometimes call theme-adjacent: 47a [Baby back __] RIBS, which I found to be a minor infringement. 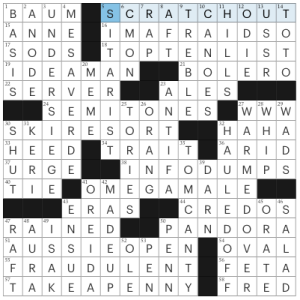 Was FaceTiming with my husband while solving, so it might actually be a good bit easier than the standard Fri NYT.

Fave fill (so much of it!): SCRATCH OUT, I’M AFRAID SO, TOP TEN LIST, INFO DUMPS, OMEGA MALE (alphas are boring, let’s face it), AUSSIE OPEN (though I’m not sure I’ve really heard it shortened thus–not a tennis obsessive), TAKE A PENNY, MESA VERDE (mainly because of Better Call Saul), HAULED OFF, WARMED OVER.

Didn’t know/recall: 35d. [The pauper in Mark Twain’s “The Prince and the Pauper”], TOM CANTY. 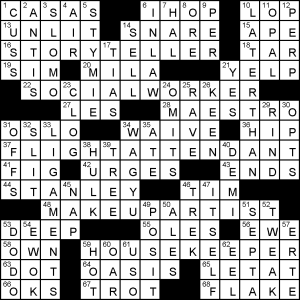 It’s unusual to have wacky theme answers on a Wednesday, so that is perhaps why most of the other clues and answers were pretty straightforward. Maybe you haven’t encountered [Japanese cattle breed used for Kobe beef], WAGYU, which is ridiculously overpriced meat. 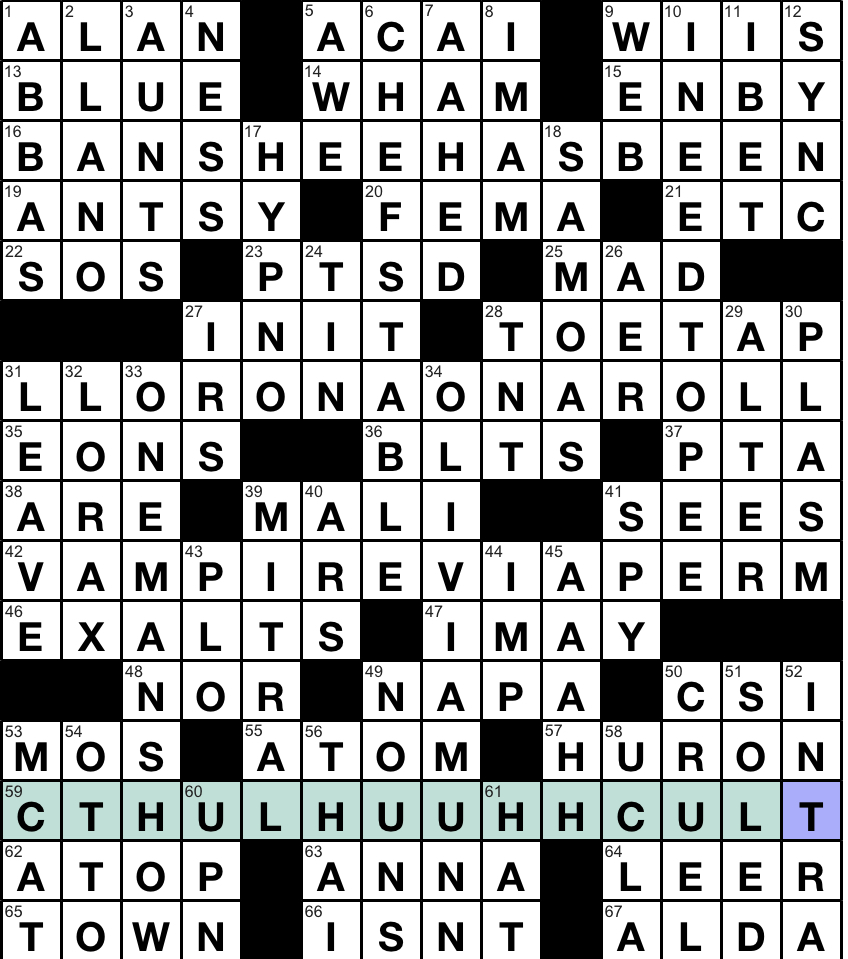 This week’s Halloween appropriate and well-titled AVCX Classic was a 3/5 difficulty from Quiara Vasquez.

Such a fun theme for Halloween, with monsters ‘mashed’ to give us entertaining anagrams that could make for some great costume inspirations, if you’re not yet prepared for Monday.

The irregular size of the grid gave us the chance for some extra juicy long downs, with I NEED TO PEE, CHEF’S TABLE, OLIVIA MUNN, and ONE MAN SHOW giving a nice framework for the fill fo the puzzle.

And for my fellow millennials, a reminder of just how terrifying “ARE You Afraid of the Dark” was

Don’t let the title emoticon fool you, this puzzle is not confusing or perplexing. 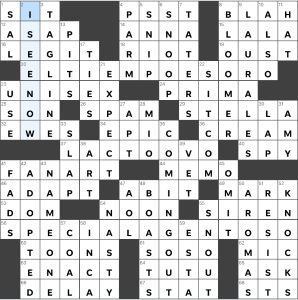 Theme: each themer ends in the pattern O…O

Fun cluing for ELTIEMPOESORO, which even though I’d not heard this phrase before in Spanish, it was easy enough to piece together and had fair crossings. I needed a few crossings to fill LACTOOVO, as it’s not one that I hear or use often but I am familiar with it. Once it was started, SPECIALAGENTOSO becomes apparently very quickly and was a Disney show with 60 episodes. Based on today’s title, I wasn’t sure what we were looking for with the themer but after the first one filled in, the “o”s popped and then the ending made sense and it was even more fun to complete the next two, knowing the pattern and given the cluing, it was clear that it’d be at the end. Great theme, set, and title hint! Love that it’s an emoticon too.

Loved the grid design, the various lengths of the themers, and all of the delightful bonus fill!