Happy Halloween everyone! We’ve got a very spooky theme today: 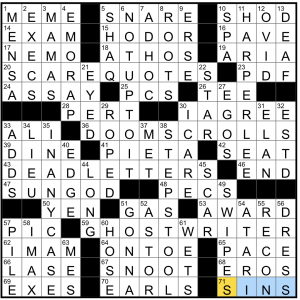 So in a nutshell, it’s a phrase with a Halloween-y word combined with something that could be written. A fun re-parse!

I realized while I was solving that the phrases were all eerie, but I didn’t see the writing connection until I got to the revealer. I think part of this was because DOOMSCROLLS uses “scrolls” as a verb, as opposed to SCARE QUOTES and DEAD LETTERS where they’re nouns. It does make DOOMSCROLLS the odd man out theme-wise, but it’s such a fun colorful phrase that I don’t mind at all. I didn’t know the term DEAD LETTERS, but it’s easy enough to guess from the clue.

It’s a very tight theme set, which can mean that the fill can suffer due to lack of choices. But this puzzle has great two long answers that run through three different theme answers in STEPSTOOL and NOT UP TO IT. The other long answers in HARPER LEE and IN ANY CASE are nice too.

I ended up with a fairly average Monday time, but that’s definitely due to my knowledge of both crosswordese and Game of Thrones.  When my mom solved today’s puzzle, she got truly stuck at the ERSE/HODOR/ATHOS and had to look up the crosses (she also refuses to say that EMO RAP is a thing). I think that’s a fair criticism, and there are a few other places (ASTOR/SNOOT and the ELAN/ESTD areas) that weren’t really Monday smooth. I’m curious if this puzzle would have run on a Monday if not for the holiday? But given how well it ties in and how smart the theme is, I’m glad the team made this choice.

For Halloween, our theme consists of people in masks. 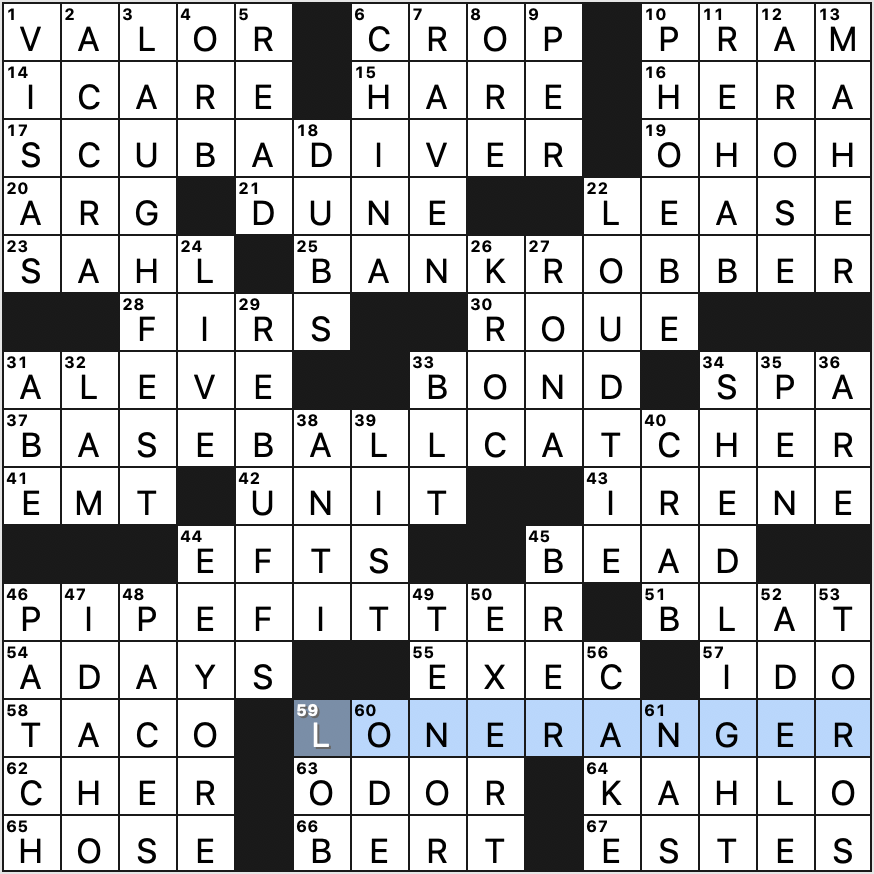 Pretty straightforward, but I’m not so sure if PIPE FITTER fits (haha). I suppose if one is doing some welding then maybe, but when I search for images of pipe fitters, very few of them have masks on. Too bad CONSCIENTIOUS PERSON WHO DOESN’T WANT TO SPREAD COVID IN THEIR COMMUNITY didn’t fit instead. 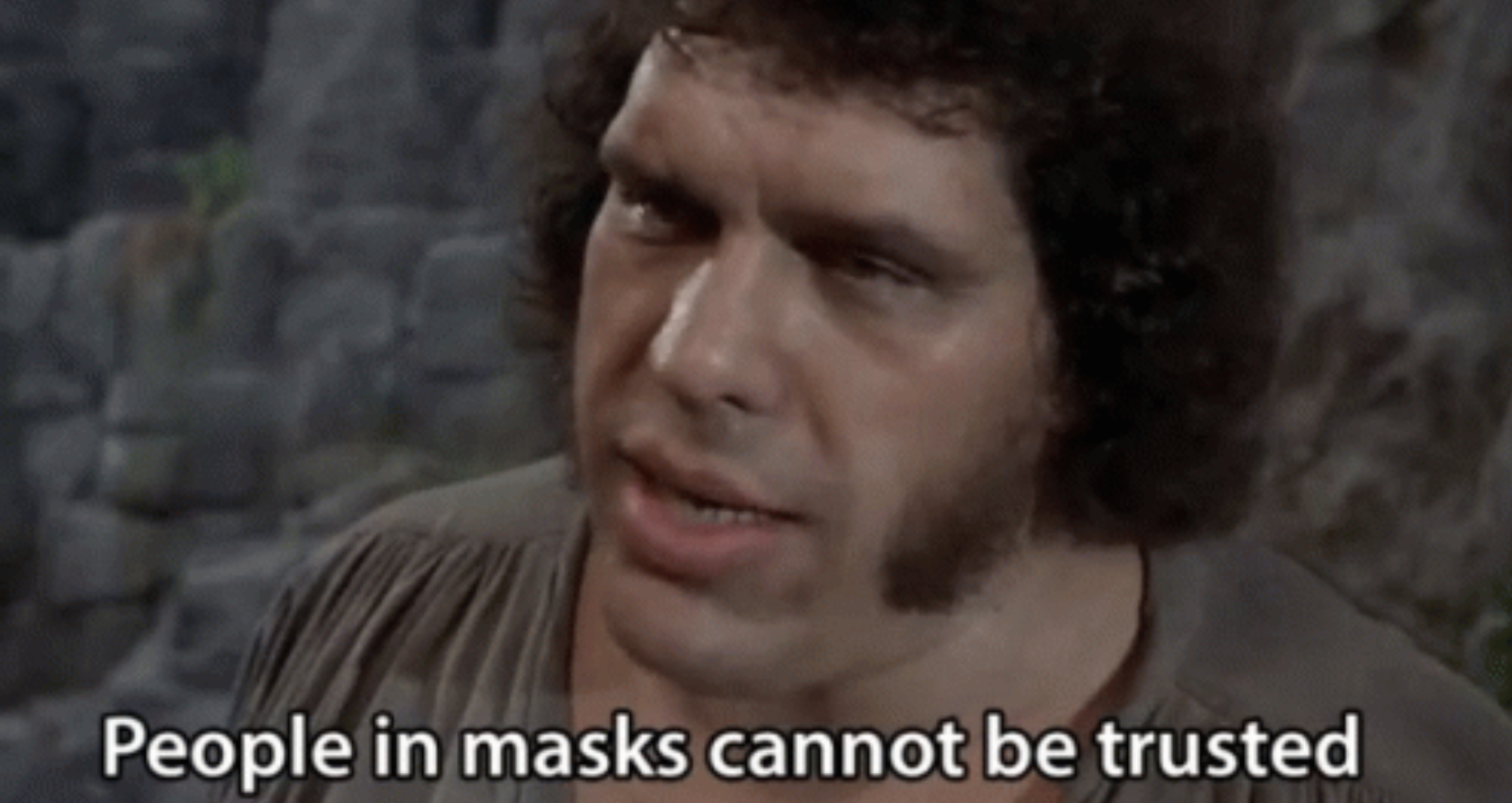 And that’s about it. Clues were about as straight as the theme making for a quickish solve. 3.25 stars. Have a Happy Halloween! 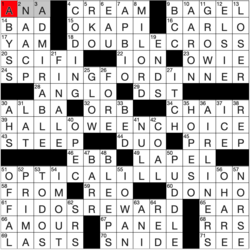 Boo! It’s Halloween, and the seasonal TRICK-OR-TREAT theme, straightforwardly enough here, is in the clues:

I dunno…I did themes like this back in the day, but I’m not crazy about “theme in the clues” executions like this that usually lead to contrived theme entries. In this case, at least, DOUBLE-CROSS and OPTICAL ILLUSION are in-the-language phrases, but the other three are clearly chosen for symmetry and length rather than because they’re words that people say together on a regular basis.

The fill is fine for a Monday, with not a ton of proper nouns to trip up beginning solvers. 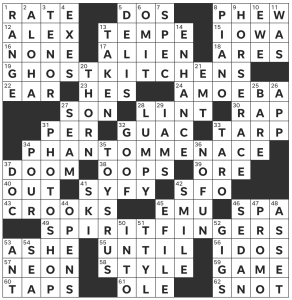 Good morning everyone! I hope you are recovering from a lovely / lit Halloweekend. I had fried chicken + french fries for TWO meals yesterday and a whole liter of seltzer water and I can finally feel life draining back into my body. Today’s puzzle is spooky-themed, with three long answers whose first words are a type of specter. We’ve got GHOST KITCHENS, PHANTOM MENACE, and SPIRIT FINGERS. My favorite entry was definitely the latter, as I am not a Star Wars Girl, and there’s a ghost kitchen near me that I absolutely hate. (The DoorDash deliver-ers and their ebikes clog up the sidewalk, and I essentially have to walk into traffic in order to simply pass by.)

Nate arranged these theme answers in a symmetrical grid, with the long answers PHOTOSHOP and HORSERACE on either sides of the grid. I also liked to see a Mariah shout-out in the clue for RANGE (I immediately put on “Dreamlover”) and the clue for ENHANCE referencing CSI, which reminded me of this puzzle. 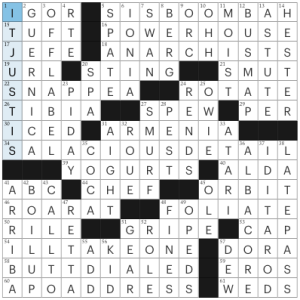 Standard Monday TNY difficulty level for me, i.e., harder than a Saturday NYT.

Not sure about having a solitary SALACIOUS DETAIL rather than multiple, but I’ll hazard a guess that a number of right-wing “reports” included one specific SALACIOUS DETAIL (no idea if it’s true or made-up) in relation to the attack on Paul Pelosi. Not too keen on phrases like BOIL UP (?), ROAR AT, CALL TO.

Re: [“Yes, ___” (line cook’s assent)], CHEF — If you didn’t already watch season 1 of The Bear on Hulu, get on that! “Heard, Chef” is perhaps more commonly used in the show’s dialogue than “Yes, Chef,” but it’s a good show with snappy writing and deft performances. 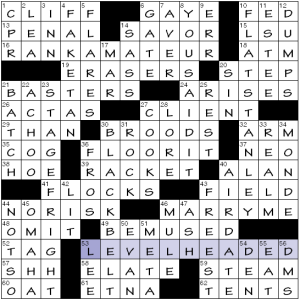 As per the revealer, the first parts of the theme answers are synonyms for  various definitions of ‘level’: rank, flat, stage, floor.

Not thrilled with the title here, as it refers merely to the revealer answer but not to the theme itself.

That’s all I’ve got. It works well. 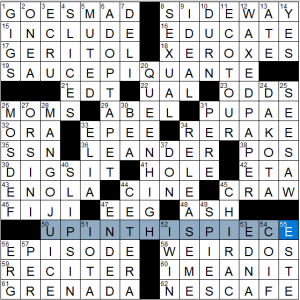 Many thanks to Douglas here in the Fiend comments for noting that BEQ made this puzzle available at https://bit.ly/3gRy8z7. I was going to give it one more try this evening, and am glad I checked the comments here first.

The first half or so of this puzzle was classic BEQ in the way that I sync with him: GOES MAD for [Loses it] and GIGS for [Jobs] were a quick start with no second guessing. MOS DEF [26d Yasiin Bey’s former rap name] opened a new corner.

The center has some rough spots: the crossing of BEA [30d Duolingo character who wears a bandana] and ABEL [29a ___ Magwitch (escaped convict in “Great Expectations”)] is tough – I feel moderate, not shame, but “aw shucks” at not knowing a Dickens character, but can’t bring myself to learn any “character” in Duolingo other than the owl. I passed a woman who could have been a spitting image of BEA Arthur (with some risers in her shoes, perhaps) on my walk this morning – why not clue BEA to her?

44a [Field for Michel Hazanavicius and Luc Besson] for CINE – am I supposed to nail down that we’re looking for a French word because the gentlemen in the clue are French? I’m not sure I’m buying that all the way.

And QUEEN HIGH [20a Poker hand where one honor takes it]. I’ve never encountered this use of “honor” before. I see it’s from bridge, and am not convinced that it’s used in other games.

Not too much stands out to me otherwise. I guess I’ve never seen EDNA clued to genetic material before, that’s something.