So, I’ll admit that I normally grimace a bit at tribute puzzles, but I really enjoyed today’s Sunday NYT because of how multi-layered it was. The fact that the puzzle is in tribute to one of my ultimate queer icons did not hurt either (and, in fact, I PRed my solve!).

Let’s see what we have for “theme” answers: 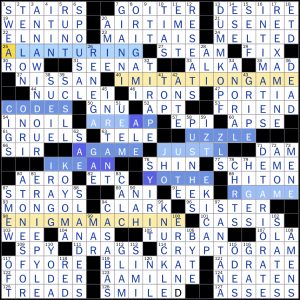 Taking these seven symmetrical entries and subbing out the letters as instructed, we get:

This code-breaking meta answer is related to the other “theme” answers in this tribute puzzle:

– 25A: ALAN TURING [English computer scientist who pioneered the breaking of ciphers generated by the 98-Across]
– 40A: IMITATION GAME [2014 movie portraying the work of 25-Across, with “The”]
– 98A: ENGIMA MACHINE [W.W. II-era encoding device]
– 114A: CRYPTOGRAM [Sort of encoded message found in this puzzle’s grid [SEE NOTE]]

Perhaps it’s because I just finished watching the brand new CBC documentary “Across and Down” about the importance of diversity and representation in crosswords, but having this Sunday NYT puzzle celebrate one of the most important gay men in modern history make me incredibly proud. I hope you enjoyed it too, even if you didn’t get to share in that aspect.

(As a hilarious meta side note, NYT recently stopped publishing .puz versions of its puzzles so that it could focus on the cool transformations it could accomplish in its own crossword app. I really liked that solving the puzzle in the app immediately resulted in a translation of the cryptogram… but that made it tough to screen grab an image of the original (non-translated) puzzle! Just a bit too much of a good thing, I reckon.) :)

Theme: The letters IE are appended to the final words in familiar phrases, changing their meanings and thus the meanings of the phrases which get crossword-wacky clues. 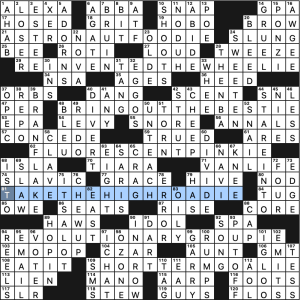 Kind of a mixed bag, but mostly it falls in the plus range. I like a good add-a-letter theme, and there are some real gems here.

Solid fill all around with notable highlights BRAN FLAKE and especially VAN LIFE. Nothing else shines quite as brightly as those two, but there’s nothing much to scowl about. I don’t think UNTEACH [Cause to forget, as a bad habit] is as common as “unsee,” but I think I like it. 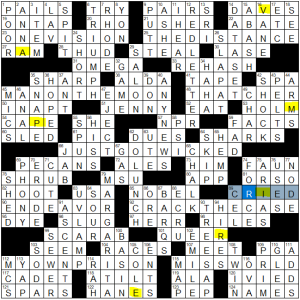 Evan takes us to a party this weekend. The band is taking requests, and we’ve got a meta to determine who the group is.

Our title is “Alternative Rock,” and the themers are evident:

I am not a regular meta solver, and when I volunteered to take over Evan’s puzzles, I knew I’d be in for one from time to time. To borrow a recap structure from Matt Gaffney, let’s get into it:

First insight: All of these songs are actual songs. This may not be a needed insight for you, but it was for me, as I only recognized ONE VISION and THE DISTANCE at first.

Even my novice meta brain knew at this point to learn and list the bands that recorded the theme songs (heh). In order, they’re Queen, Cake, R.E.M., Cold, Dawes, Creed, and Hole.

Second insight: Those are all relatively short, one-word band names, and there are similar-ish entries in the grid:

I’ve already arranged these in grid order. Naturally the next place is to look at the changed letters, which spell VAMPIRE, and are highlighted in the solution grid above. Based on that and the meta prompt, I presumed the band is VAMPIRE WEEKEND and was happy to chalk up the “weekend” part to the fact that Halloween could be called a “Vampire Weekend,” but Evan let me know that “weekend” was supported in the puzzle, so back in.

Third insight: The changed letters from the band names (the -W- from DAWES, etc etc) also spell something.

Naturally, it’s WEEKEND, keeping the same order. My tiny meta brain exploded at this point, because I was already happy with my rationale to get to “Vampire Weekend,” and now here it is, a thousand times more elegant.

Think about it: (1) Recognizing that VAMPIRE WEEKEND is two seven-letter words and Halloween-y. Finding seven bands that (2) contain the letters of WEEKEND, (3) can each be changed by one letter such that the letters of WEEKEND are now the letters of VAMPIRE without changing the order (we might call them… “alternatives” nodding to the title), (4) are short enough to fit all seven into a puzzle, in order, and (5) have songs that fit into a typical theme set, lending themselves to the costume party conceit. And then, you know, just the rest of the puzzle.

This is lengthy, so I won’t go into notes, but appreciate the Halloween vibes Evan has throughout the puzzle even outside of the theme: candy, costumes, scary movies, etc etc. It’s plentiful without bashing me over the head. 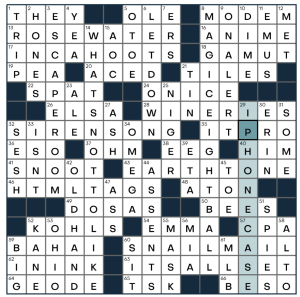 WHATSNOTTOLIKE 14D [“It’s perfect, right?”] indeed! Today I especially want to celebrate the variety of perspectives shown in this puzzle. We have THEY 1A [He/___ pronouns] right off the bat, followed by PEA 19A [Mattar paneer legume], 54A EMMA [Early 20th-century activist Goldman], BAHAI 59A [Faith that prohibits gossip], LETDOWN 6D [___ reflex (breastfeeding trigger)] (I *love* seeing this clue in a puzzle that was written by two men and edited by a third – please guys, keep this up!), AOC 15D [Rep. who wore a “Tax the Rich” dress to the 2021 12-Down Gala], and ERIN 30D [Moriarty of “The Boys”].

Yesterday I mentioned that Universal is a great place for newbie constructors to start submitting due to the quick response time and effort the editing team puts into their thoughtful feedback. All four constructors this weekend are veterans displaying grids that embody the Universal themeless standard, which prioritizes cleanliness and enjoyment. Respectively, they come in at 72 and 74 words, average word length of 5.3 and 5.0, and 16% and 17.3% blocked. In both cases, (77.7%) and (78.3%) the majority of the entries are five letters or shorter. To be clear, I think this is a good thing! A themeless grid doesn’t have to meet some arbitrary definition of “ambitious” in order to provide a fun experience for the solver, or simply to be a good puzzle. Both puzzles this weekend were excellent.

Thank you Rafa and Michael!

Theme: Each theme answer included SELF in the middle, spanning two words. 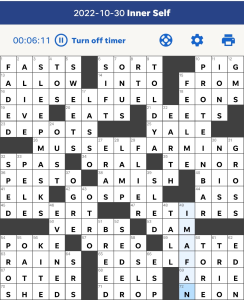 I’m a day late here, but I wanted to post something. I had a good time with this puzzle. I did not know EDESEL FORD‘s full name, so I actively used SELF to help me fill it in. DIESEL FUEL was pretty much a gimme, and then I caught MUSSEL FARMING on the crosses. I also really enjoyed SLEEP MASKS, TOLD YA, and FEEL ME, the latter two of which felt particularly fun vernacular phrases.