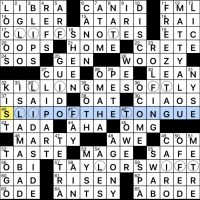 Happy November, lovelies! Matt wanted to LIFT everyone up this month, as evidenced by his theme entries today. 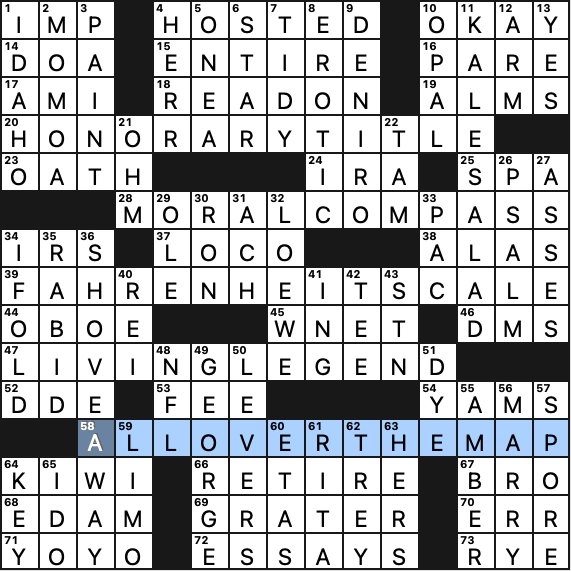 Despite my nits above, I enjoyed the aha moment that came with the revealer because the theme wasn’t coming to me otherwise. And that’s a pretty fun revealer in and of itself.

I like KALE SALAD (as an entry…and I’m not opposed to it IRL). SHOVE AWAY feels a little loose and less in-the-language. 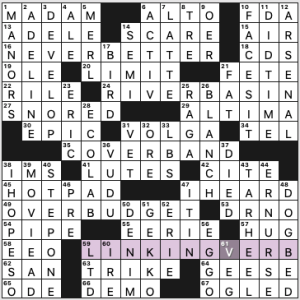 A grammatical term is the name of the game: 59a LINKING VERB is [Grammatical connector like “is” or “seem” … or a connector found literally in 16-, 24-, 35- and 49-Across], and the letters in VERB span the break between words in the themers “NEVER BETTER,” RIVER BASIN, COVER BAND, and OVER BUDGET. Solid Tuesday fare.

An adjacent pair of entries were both new to me, but fortunately the crossings worked for me. 28d. [Big name in water purification], ECOLAB? And 36d. [On-demand digital video brand], VUDU? I’ll take your word for it.

Wildly hard for newbies: 5d. [Dark European thrush], MERL. If you don’t know your crosswordese birds or the cruciverbal legend Merl Reagle, this was probably a big “Huh??”

Team Fiend’s own Zachary David Levy (no relation) serves up a delightful Tuesday puzzle. The theme stands on its own without a revealer. Each theme entry incorporate a word that means “scribble.” 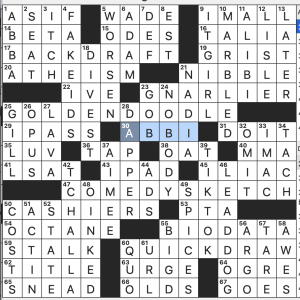 What I didn’t know before I did this puzzle: never heard of ABBI Jacobson. 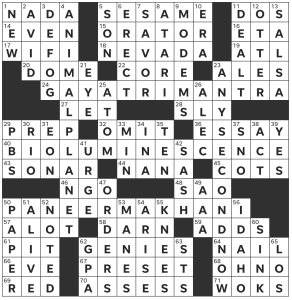 Great title and puzzle from Enrique and Brooke today. I figured out the theme pretty quickly, mostly because GAYATRI MANTRA was new to me. Because of that, the first thing I noticed about it was “oh, it starts with GAY”. I looked back at the title, and I immediately knew what was up. There are only three theme answers, which honestly feels a little light given how wide-ranging the theme could be? But I do like the answers the constructors chose a lot; they all have so much personality. Along with GAYATRI MANTRA, I didn’t know the MAKHANI part of PANEER MAKHANI, and now I want to try it.

This puzzle played very easy to me, even though I didn’t know two out of three theme answers. It helped that I got the two long downs of ANIMAL PLANET and ANY SECOND NOW quickly – I loved Animal Planet back in the day, did anybody else watch Meerkat Manor? Quality content. My favorite clue in the puzzle was [Number worn by Sue Bird] for TEN. Sue played for the WNBA’s Seattle Storm for years and just retired this season. Loved to see a shout-out for her.

Coming off the bench to fill in for pannonica – and happily so! I really enjoyed this puzzle. Some constructor’s names make me smile before I even start solving because I know I’m in for a treat, and Aimee is definitely one of those. She consistently delivers smooth, entertaining puzzles. Like this one!

The anchor of the grid is the central 15-letter entry at 37a, [“Don’t speak to me that way!”] for WATCH YOUR TONGUE. Nice.

What I didn’t know before I did this puzzle: so many things! I did not know that KAMALA means “lotus” in Sanskrit. I don’t pay attention to the Oscars so I didn’t know that Troy Kotsur won for CODA (and in fact have never heard of the gentleman).

I did know that the CELLO is the solo instrument featured in “The Swan” from “Carnival of the Animals” by Saint-Saens. When I was a kid we had a record of the piece including poems by Ogden Nash read by Noel Coward. And because the internet is a wonderful thing some days, I can relive my childhood and share it with you, including a photo of the cover that immediately takes me back to my little red-and-white portable phonograph. 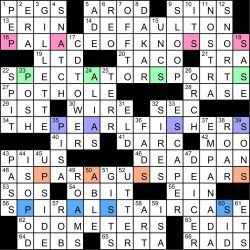 Hello all! I hope you’re well, and apologies for the tardiness on this post.

A sports-related theme answer is going to elicit oohs or groans, but one of the fascinating things about knowing sports terminology is how easy a lot of phrases in that realm can be used to create themes. Here we have the letters PASS spread out in each of the themes, alluding to the reveal (43D: [___ interference (football foul and the puzzle theme)]).

Still had a couple of seven-letter and nine-letter entries in the grid to enjoy despite the FIVE 15-letter entries, which I’m still marveling at now as I see the grid again once more. I initially put “defaulted” instead of DEFAULT ON, which cost me a few seconds (14A: [Fail to repay, as a loan]). The presence of EMPANADA (37D: [Filled Spanish pastry]) and TACO in the grid has definitely got me in the mood for some good Mexican food (20A: [Folded-and-filled tortilla]). Props to all the people who still have a CD TOWER at their place, which included yours truly (17D: [Audiophile’s storage unit]). Might have to pop in one of these CDs and give it some play at the moment. Now to find a CD player around here!

“Sports will make you smarter” moment of the day: GILLETTE (3D: [“Foamy” shaving cream brand]) – Not only is Gillette a brand that’s based in Boston, it is the title sponsor of the stadium that houses the New England Patriots: Gillette Stadium. Gillette replaced the old Foxboro Stadium, which was next door to the current stadium, in 2002. The stadium has also hosted the NCAA Lacrosse national championships, in 2008, 2009, 2012, 2017 and 2018.