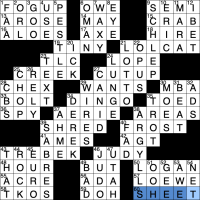 hello and welcome to episode #752 of matt gaffney’s weekly crossword contest, “Costume Change”. for this week 4 puzzle, the instructions ask for a common 5-letter Halloween costume. all right. what are the theme answers?

i don’t know. it’s a really weird grid, with no long answers, a huge number of black squares, and most unusually, no all-over interlock: there are three totally disconnected sections of the grid, and several other places where multiple sections are connected only through a single letter. there is also some slight asymmetry, with square 38 being a white square but its symmetric partner a black square at the end of 28a/5d. that one white square allows 38d {Scottish jackets} ARGYLLS, the only answer in the grid longer than even 6 letters. (i did not know this word, by the way.)

i did note several answers in the grid that could fit clues for different entries:

i can’t see what to do with these, even though i suspect they are relevant. i also think we need to be looking at ways of altering the grid to make it connected like a normal crossword.

the fact that the final across answer was {It’s sometimes made of silk} SHEET certainly caught my attention, given that we’re looking for a 5-letter halloween costume. if nothing else comes up, i’ll try GHOST but without any real conviction. but this probably also wants to be a clue for TIE or NECKTIE—neither of which is in the grid.

what about the alternate title? “anybody want a refill”? this didn’t help me. i’d love a refill, and i guess this does suggest more strongly changing the grid—but surely matt can’t want us to entirely refill the grid. i would really, really like to put some letters into black squares to give the grid connectivity, but i just don’t see where to do it without creating nonsense entries.

well, i’m about out of time and out of ideas. i guess i’m trying ghost, but i have no idea what’s going on in this meta. somebody let me know in the comments. 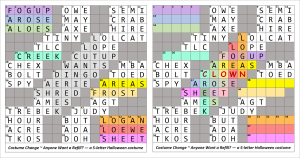 (Matt here, adding the solution grid to Joon’s review. You take the nine 5-letter words from the outer two areas, refill them into the ten 5-letter entries in the middle of the grid, and CLOWN appears across the center).