Nicest puzzle of the week, IMO, starting with the title which has all kinds of fun possibilities. In this case, each theme clue is deficient in that each is missing a letter I. The revealer at 59a tells us where to place each missing letter: I BEFORE E [General spelling rule, and what must be imagined in the starred clues to make them accurate]. Ergo, look for the starred clues, find the one and only E in each clue, and put an I before it to get the real clue. 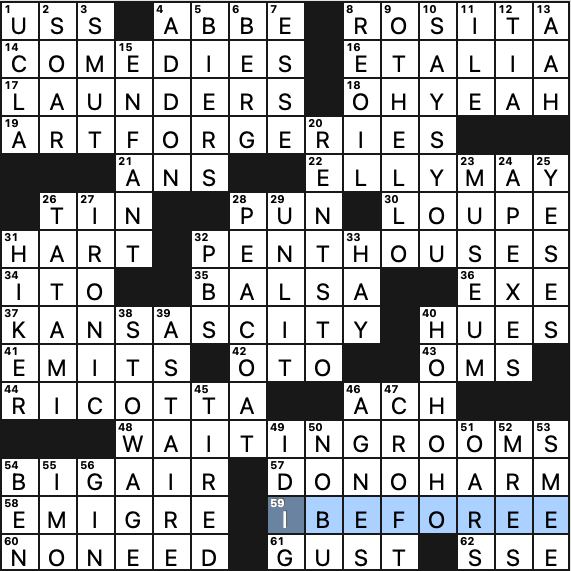 In my case, I found myself at the final theme answer just before getting to the revealer. I put in TESTING ROOMS which seemed to fit the clue as stated. The revealer then set me straight, and I was off to find the other answers.

To be fair, the theme is still rather loose; there are a lot of potential theme clues and entries that could work. But these are all well chosen and the fake clues are completely plausible on their own before the aha moment reveals all. So it’s a winner in my book. And the fact that there is only one E in each clue is a necessary—but still elegant—touch.

Beyond that, the fill is quite impressive. Check out the NW and SE corners where we have LAUNDERS and DO NO HARM stacked between theme answers. You almost never see such long fill answers sandwiched between theme entries. Yes, it results in ESSE, NOBU, and MRES, but those are all gettable and not beyond the pale, it being Thursday and all.

Elsewhere we find OTHELLO, “SAYS YOU,” PEACOAT, ASTAIRE, RICOTTA, and ELLY MAY (I thought it was ELLY MAE). Oh, and BIG AIR, “NO NEED,” “OH YEAH?” and even ET ALIA, which is redeemed with a clever clue (see below). All in all, a fun solve all around. 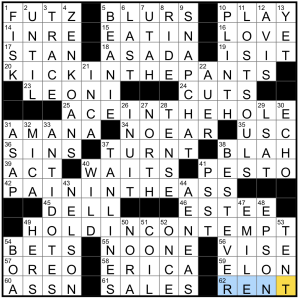 Pretty clever in that they matched common phrases with literal examples of X missing from Y, and clued each item with the missing components as blank spaces.  Slight incongruity in the theme with the final entry missing “the”, but I’m sure it wasn’t easy coming up with a better 14 letter alternative.  This played tough mostly because of the fill — ZEN KOANS was not easy to parse, and yields only 125k Google hits.  I don’t know the minimum number required to be considered idiomatic — Bruce Haight once told me he thought 400k was the cutoff.  That’s obviously arbitrary, but something to think about.

Cracking: FUTZ — I am a professional FUTZer around the house.  FIXing is a tall order, but I can FUTZ with the best of them.

Slacking: PLINTH — Pretty shocked that this has 27 prior appearances in the Times.  Has anyone uttered this word in real life?  “Oh, it’s a beautiful marble bust, and just look at that exquisite PLINTH it sits atop.”

Sidetracking: FISK — It pains me, as a Yankees fan, to admit this, but I can’t see FISK in print without picturing “Pudge” FISK waving his arms like a maniac, trying to will a ball fair in the 1975 World Series. 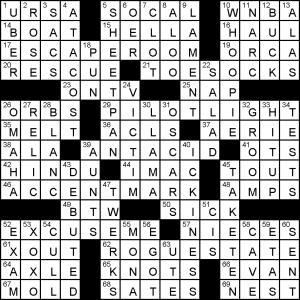 The theme in today’s LAT by Carly Schuna played kind of bland to me. Each of four answers start with the marque of a different brand of car and the clues are written as though the phrase refers to that car. The thing is, almost every generic word has been the name of some car at this point, at least it feels like it to me? And possibly, there’s also a disconnect because for the most part we have very different marque names to Americans, sometimes even for the same cars! Here is what is popular in RSA:

Anyway, the entries are:

On the plus side, it was nice to see [__ gobi: potato and cauliflower dish], ALOO get some airtime. The dish is literally Hindi for potato (&) cauliflower though.

I did, however, enjoy the playfulness in the clue-writing. Sometimes the mid-week clues can feel a little by-the-numbers, but there were definitely a few grace notes on display today!

Theme: Each theme answer is a musical artist who has a word related to “stream” in their name. 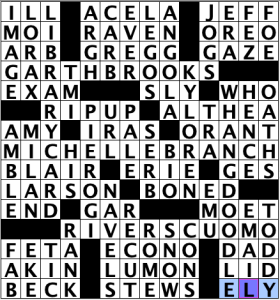 This was a pretty straightforward theme today. I filled in GARTH BROOKS after getting CARB, LEGOS, and KYLO REN, making it pretty easy to remember the country singer’s name. I was more dependent on crosses for MICHELLE BRANCH and RIVERS CUOMO, but I also appreciated how smooth of a solve it was. There was also a bonus musician in 9a [“With 66-Across, guitarist who started off in the Yardbirds”] and 66a JEFF BECK. I could tell I was only midway through my coffee since I kept messing up Across and Down answers, so I had JOGS initially in 9a rather than 9d [“Casual runs”], but it was an easy remedy.

There was a lot of fun fill in this grid. I knew from the moment I read the clue for 3d [“It can give you a novel experience”] that I was going to love it, and sure enough, LIBRARY CARD is such a fun answer. Let’s all support our local libraries!! While we’re in that corner, 2d [“Dr. Seuss titular character with a bushy mustache”] was fun for the LORAX. I also really liked 33d [“Wander around”] for AMBLE since I’m so used to ROAM in puzzle’s, and while we didn’t get ROAM, we got its homophone via 55d [“Circus Maximus city”] ROME.

This puzzle lends itself to a longer discussion of its great fill, from WHANGDOODLE to PIEROGI and much more. It was a great time.

This was a fun one! At first I thought it was a rebus puzzle with really long entries in the rebus squares, and then the light dawned. Each theme answer starts on the right side of the puzzle and wraps around to the next line down on the left. Peter didn’t tell us anything about Josh and Fiend didn’t have a tag for him, so this might be a debut – in which case WOW and “more, please!” 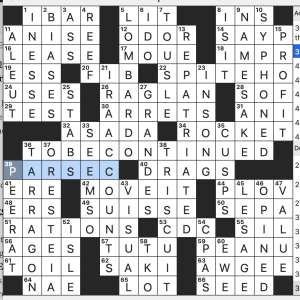 And if that wasn’t enough theme material for you, we have 36a [Cliffhanger caption…and a solving hint for this puzzle]: TO BE CONTINUED.

I really like this theme! It was fun and felt fresh to me. I particularly liked that the continuations on the left side of the puzzle were clued as words in their own right rather than having blank clues. I realize that made the construction much more difficult. Two weeks in a row Peter and his constructors have given us puzzles that are tours de force of construction and lots of fun to solve. A big round of grateful applause.

The side effects from the bivalent booster are kicking my patootie at the moment and this is late going up, so I will go right to What I Didn’t Know Before I Did This Puzzle. I didn’t know that a PARSEC is a little more than 100 quadrillion feet. Now I do!

PS GET YOUR BOOSTER ANYWAY. Recommended for everyone. DO IT. 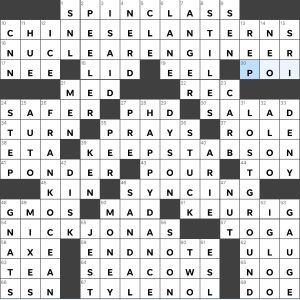 Theme: the word “floor” can be added after (or on the “bottom” of) the second word of each themer to make a common phrase

FRANKOCEAN was hopefully more familiar to most of you but I needed crossings for him, however, I did my own little HAPPYDANCE while filling this in as an entire phrase after reading the clue, though I LOSTGROUND with this last themer and also needed some crossings to get me back on track. Since the themers are all in the downs today, the title hint means that we get the following theme phrases: OCEAN FLOOR, DANCE FLOOR, and GROUND FLOOR.

Smooth solve overall, though the middle slowed me down a bit and the C shared by my last two stumpers today was the final letter placed for me today. Loved the grid design too and how it allowed for so much great bonus fill!